On Dec. 6, 2018, the 228-foot tuna seiner Jeanette sank off Tutuila Island, a part of American Samoa, after being on fire for nearly 23 hours. The estimated damage exceeded $15 million. There was no loss of life.

The Jeanette, which was built in 1975 and owned by C & F Fishing LTD in San Diego, Calif., but home ported in America Samoa, caught fire and sank as a result of inadequate crew training and oversight, according to the National Transportation Safety Board’s marine accident brief.

The Jeanette, with 18 crew members, had been fishing in the Pacific for about two weeks when the captain ended the trip and returned to Pago Pago Harbor on Nov. 22 to offload 1,330 metric tons of tuna valued at $1.75 million. 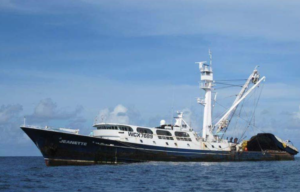 The Jeanette was a 228-foot steel hull tuna seiner built in 1975. NTSB photo.

Several senior officers left the Jeanette while it waited its turn to offload. During that time, an item on the maintenance work list called for removing wasted sections of the overhead frames on the wet deck and to weld in replacements.

That required a three-man team: two to do the welding or “hot work” and one to serve as the fire watch.

The crew member assigned the fire watch inspected all unlocked spaces that would be affected by the welding to make sure there was nothing flammable.

The one place he missed was a dry stores room that was locked. The cook was the only one with a key, but the fire watch did not seek him out to ensure the room’s contents wouldn’t be affected by the welding.

Welding started at 7:30 a.m. on Dec. 5. Shortly after 10:55 a.m. a smoke detector across from the dry stores locker set off an alarm. Opening the door to the dry stores locker, the found its contents on fire. Grabbing handheld dry chemical extinguishers, they initially seemed to extinguish the fire, but then overwhelmed by smoke they retreated and the fire re-ignited and spread.

A general alarm was never sounded nor did the crew fight the fire in an organized manner. The one crew member that did try to enter the smoke-filled area to fight the fire had a self-contained breathing apparatus (SCBA), but without a firefighting suit was unable to approach the fire.

A fire truck from the Tutuila Island emergency services arrived at the dock, but without SCBAs could not enter the smoke-filled vessel. Two hours later a second firefighting crew showed up but had to leave the vessel when their SCBAs started running out of air. Meanwhile, the tugboat Iseula applied its water monitor to the starboard side wheelhouse. Due to a lack of spare air bottles for the SCBAs, the Jeanette was evacuated.

Since the Jeanette had on board an estimated 90,000 gallons of diesel fuel, 300 gallons of aviation fuel, 12,000 pounds of anhydrous ammonia for its refrigeration system and the fire couldn’t be controlled, the American Samoa Port Authority and the Coast Guard had the Iseula tow the Jeanette out of the harbor and into the Pacific at about two knots.

That was a little more than four hours after the fire was discovered. Nine hours later the Jeanette listed to port and sank about 15 miles offshore.

The NTSB determined that “the probable cause of the fire and sinking of the fishing vessel Jeanette was inadequate crew training and oversight by the company to ensure safe hot work practices were followed on board the vessel.

“Contributing to the spread and growth of the fire was the lack of a clearly designated person in charge during the response, which resulted in an ineffective firefighting effort by the crew.”