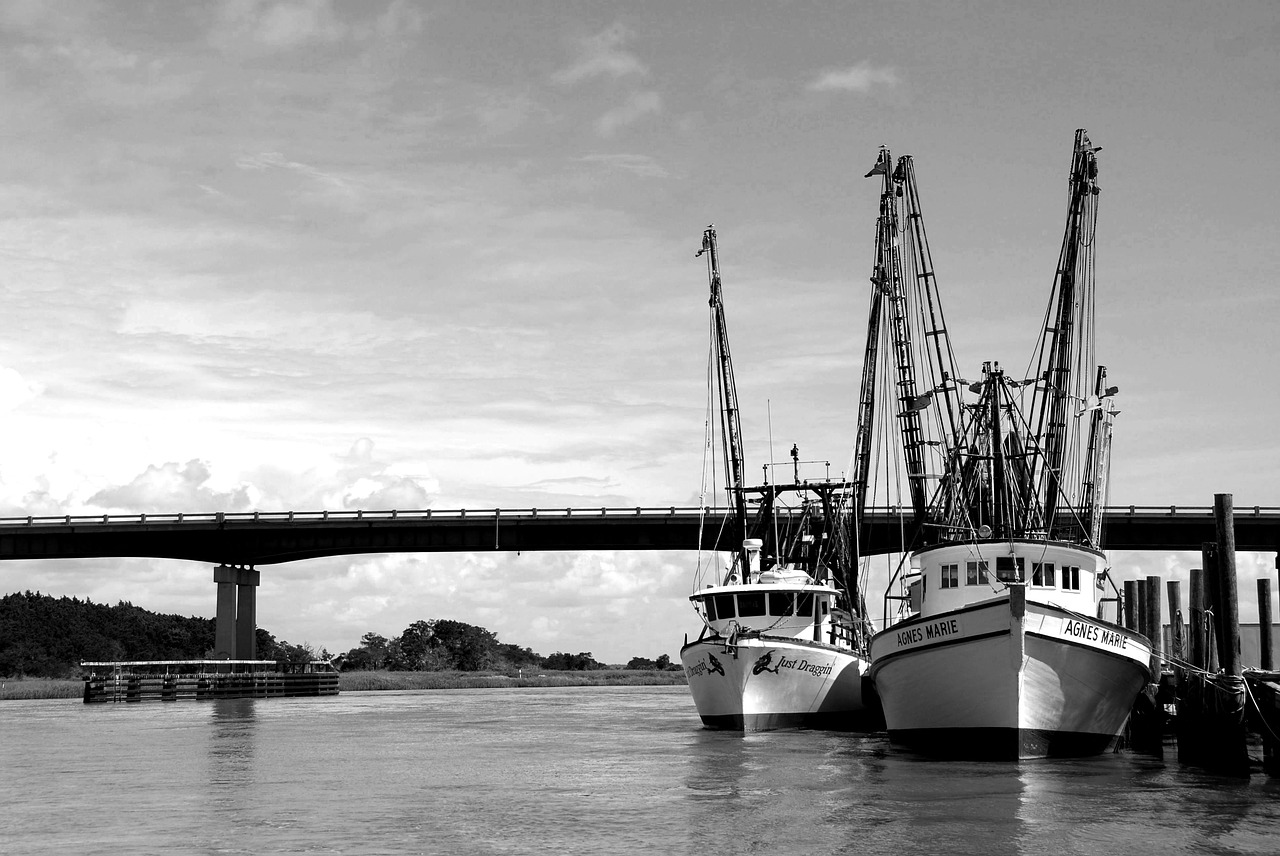 National Fisherman is the only publication dedicated to the entire U.S. commercial fishing industry. We reach stakeholders from boat to dock and beyond on every coast, in print, online, and in person. From our geographically diverse roots comes a simple mission: Informed Fishermen. Profitable Fisheries. Sustainable Fish.

Who is the National Fisherman audience?

Commercial fishing is not just an industry, it’s a way of life. Fishing communities have a very real pulse, and we strive to deliver material that is as lively as they are. Our staff covers boats, gear, suppliers, news, events, and legislation, but most important are the people who comprise this vibrant industry. 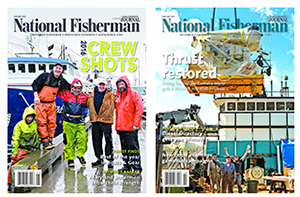 The National Fisherman audience is primarily domestic and Canadian commercial fishermen, but we also have a sizable audience of academics, politicians, government staff, sport fishermen and environmental advocates. Our coverage appeals to people who are interested and involved in the fishing industry, which includes catching fish but encompasses many other tasks, jobs and responsibilities. We speak to the people who make a living commercial fishing and those who support them, outfit them, regulate them and follow them.

What is the National Fisherman brand?

What started as a column in a local Maine weekly paper 100 years ago is now part of a suite of products that reach tens of thousands of stakeholders across the country and beyond. That reach includes the monthly National Fisherman magazine, a Seattle-based trade show and conference called Pacific Marine Expo, the annual journal Pilothouse Guide, Nationalfisherman.com, our Fish eNews newsletter, and our various social media platforms.

What is National Fisherman’s history and reach in the industry?

The magazine began as Maine Coast Fisherman the weekly newspaper column and was first published as a standalone monthly in 1946. In 1960 it combined with a New Hampshire publication bearing our current name: National Fisherman. In 1966, it incorporated Pacific Fisherman and Alaska Fisherman’s Journal in 2006. We have carried on the tradition of publishing the annual Pilothouse Guide for our West Coast and Alaska readers.

Today, we update our website daily with industry news, market updates and boatbuilding launches so our 60,000 monthly visitors can stay up to date. We keep up our social media platforms and our twice-weekly newsletter. And every month our 24,000 readers receive the printed and digital National Fisherman magazine with expanded, in-depth original reporting.

Every fall we convene with stakeholders from across the country in Seattle for Pacific Marine Expo, a conference and trade show with 500 booths and 5,000 attendees that began more than 50 years ago. The International Workboat Show, Seafood Expo Global, Seafood Expo North American and their respective magazines and digital publications are part of National Fisherman’s extended family under Diversified Communications.

Nationalfisherman.com members get access to a free digital edition of the magazine, our archives going back more than a decade, specialty publications, the digital supplement On Deck, discounts for Pacific Marine Expo, and much more.

What are the top industry issues and trends?

Commercial fishing is a dynamic industry in constant motion. Our readers are always looking for new boats, gear, and the management and legislative updates that help them make business decisions. 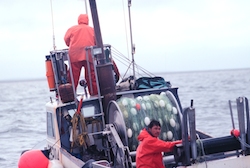 Individual states manage their own inshore fisheries out to three miles from shore.

At the federal level, fisheries are managed under the Commerce Department’s National Oceanic and Atmospheric Administration. The nation’s chief fisheries administrator is the director of the National Marine Fisheries Service, which is also referred to as NOAA Fisheries.

The Magnuson-Stevens Fishery Conservation and Management Act, first passed in 1976, established a 200-mile exclusive economic zone as the reach of our federal waters (it had been set at 12 miles). That means federal waters extend from the 3-mile state boundary out to the 200-mile national boundary.

NMFS tracks 474 stocks and stock complexes through 46 fishery management plans. The number of U.S. fisheries on the overfishing and overfished lists remain near all-time lows.

The term “overfished” does not necessarily indicate excessive fishing pressure on a stock. It means simply that the stock is not healthy enough to support a full-scale commercial fishery. Lagging stock health can result from a variety of factors, including pollution, climatic events and changes in water temperature.

What is the scale of the commercial fishing industry? 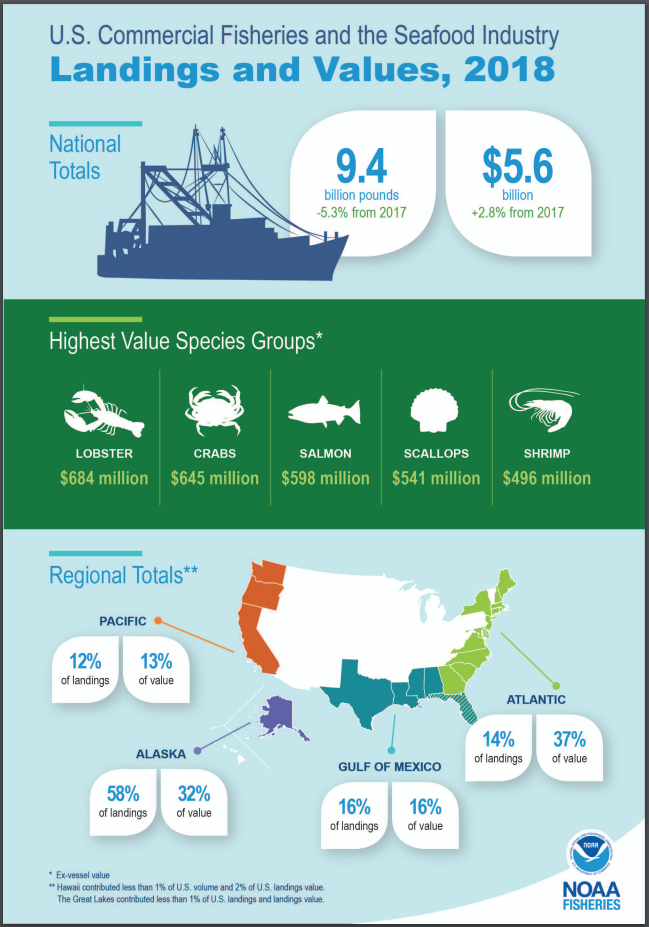 The commercial fishing industry supports roughly 1.2 million jobs nationwide as of 2016, the most recent year for which we have data. In 2018, commercial fishermen landed 9.4 billion pounds of seafood valued at $5.6 billion, and 77 percent of that was sold as fresh or frozen product, with fishmeal and fish oil making up about 17 percent. Bait, animal food, canned and cured products made up the remaining 6 percent.

As of 2018, Alaska commercial fisheries accounted for 58 percent of the nation’s total wild-capture seafood landings by volume. The Gulf of Mexico, Atlantic Seaboard and Pacific Coast accounted for 16, 14 and 12 percent. The Alaska Seafood Marketing Institute’s international reach and the state’s constitutionally mandated standards for management and sustainability set the stage for U.S. seafood in the global marketplace.

U.S. seafood products are considered a gold standard for quality. 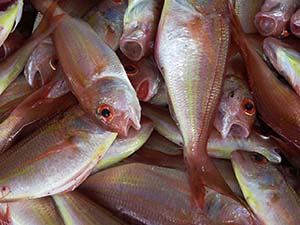 Our top species by value can be found on every coast, which exemplifies the health of our seafood industry on a national scale:

Lobster and blue crab are most often sold into live markets, which require the highest quality catch and makes these an inherently high-value fishery. Sea scallops, blackcod, shrimp and tunas are also high-value fisheries, though not typically sold live. Pollock, menhaden and salmon are landed in large volumes, more than making up for lower dock prices.

What boat and gear types does National Fisherman cover?

We also cover these topics and gear categories:

Advertising in National Fisherman will give your brand national exposure to establish and nurture new customers in every corner of the country. Learn more about our advertising rates and options.

For any other questions please reach out to our team.

Gulf of Mexico has warmed at twice rate of global oceans

Search for missing fisherman off Washington