On Thursday, Oct. 1, the New England Fishery Management Council will take up an issue critical to the survival of dayboat scallop fishermen in the Gulf of Maine.

Among other issues, Amendment 21 to the Scallop FMP addresses how scallops in the Northern Gulf of Maine will be allocated between permit categories, specifically General Category NGOM and trip-boat Limited Access boats.

At issue is the size of the NGOM set-aside — scallops “taken off the top” and made available exclusively to General Category vessels, and the subsequent distribution of scallop catch amongst all permit categories.

As you’d expect, those who own General Category NGOM permits and those who own the trip-boat Limited Access permits are at odds over how large the set-aside should be. Passionate arguments from both sides have complicated what is actually a very clear choice. That choice is to honor the forward-thinking decision the council made back in 2008 when they chose to preserve and protect a diverse scallop fishery in the Gulf of Maine.

The preferred NGOM alternatives in Amendment 21 will bring to bear what the council’s laudable foresight sought to achieve in Amendment 11. Anyone who doubts this should ask the question:

Why was the Northern Gulf of Maine Scallop Management Area created?

Allocation decisions are always difficult, and Amendment 11 was no exception. Eventually the council determined the General Category fleet would receive 5 percent of the fishery, and each vessel’s individual quota would be based on their landings between 2001 and 2004. The resource on Georges Bank and in the Mid-Atlantic flourished in those four qualifying years. So fishermen from those areas who relied on scallops for even part of their income were likely to qualify for quota.

Unfortunately, while scallops from Georges Bank to Virginia flourished in the early aughts, those in the Gulf of Maine did not. The Gulf of Maine scallop biomass has always fluctuated wildly, and the boom of the 1980s was followed by a prolonged bust that extended well into the 2000s. Between 2001 and 2004, Gulf of Maine fishermen were about as likely to load up on Patagonian toothfish as they were scallops. So if a fisherman’s future access depended on what he caught from 2001 to 2004, hundreds of Gulf of Maine boats would have been cut out of the fishery.

Fortunately, in a display of amazing foresight, The council didn’t let that happen.

Instead, the council established the Northern Gulf of Maine Scallop Management Area. Any boat that held a federal scallop permit between 2001 and 2004 qualified for a NGOM permit, which enabled them to fish for scallops in federal waters north of 42’ 20” (roughly Boston Harbor). The NGOM permit prohibited access to the lucrative grounds south of that line, but it preserved access north of it for a dayboat fishery with a 200-pound daily limit in anticipation of the day scallops would return to the Gulf of Maine.

Which brings us to today. When the NGOM was created, boats that were making good money elsewhere didn’t think the Gulf of Maine was worth fighting over. But things have changed. Now businesses that have been making millions on the productive grounds to the south argue that the very boats for which the NGOM was created didn’t qualify to be “real” scallop fishermen. The fallacy of their argument is apparent when you recall that the council created the NGOM Management Area for the explicit purpose of preserving a diverse, small-boat fishery in the Gulf of Maine.

Fortunately for Gulf of Maine fishermen, this debate was already settled in Amendment 11 when the intent of this management area was made clear. The NGOM Management Area was created to preserve access for small boats in the Gulf of Maine.

Nowhere in Amendment 11 does it say these rights are secure only as long as the resource is in the crapper. The fact that boats to the south want unconstrained access into the Gulf of Maine as an insurance policy against climate change is irrelevant. A fisherman who’s willing to do what it takes to make a living from what Mother Nature offers close to home is no less of a fisherman than one who ventures far and wide to discover what offers the highest payday. With the preferred alternatives, both types of fishermen can flourish.

The preferred allocation alternative strikes an appropriate balance between survival and profits for small boats and big boats alike. It allocates the first 600,000 pounds to the NGOM set-aside and then implements a tiered sharing system. Between 600,000 and 3 million pounds, the set-aside will receive 25 percent of the quota; after 3 million pounds it will receive only 5 percent. In a best-case scenario this alternative will yield a NGOM set-aside of less than 1.5 million pounds. Beyond that everything will be added on to the big boats’ “regular” allocation — which by the way is over 46 million pounds this year.

The choice is clear. It is the answer to the question: Why was the Northern Gulf of Maine Scallop Management Area created? 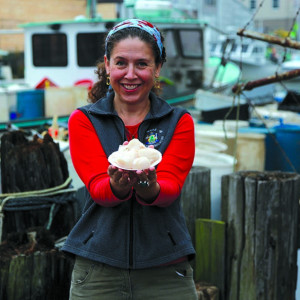 Togue Brawn ships Maine seafood to consumers across the country through her business Downeast Dayboat. In her spare time she advocates for Maine's dayboat scallop fishermen.