On Thursday, June 18, Pew submitted a petition to the Commerce Secretary requesting an immediate shutdown of some federal waters off the coast of New England to commercial lobster and Jonah crab fishing. A letter signed by Peter Baker of Pew Charitable Trusts and attorney Purcie Bennett-Nickerson accompanied the petition.

Citing deaths and serious injuries of right whales at levels "well over what the population can biologically sustain, and more than four times the legally allowable limit," the letter implores Secretary Wilbur Ross to use the authority of Marine Mammal Protection Act, the Endangered Species Act and the Magnuson-Stevens Act to effect the shutdown. 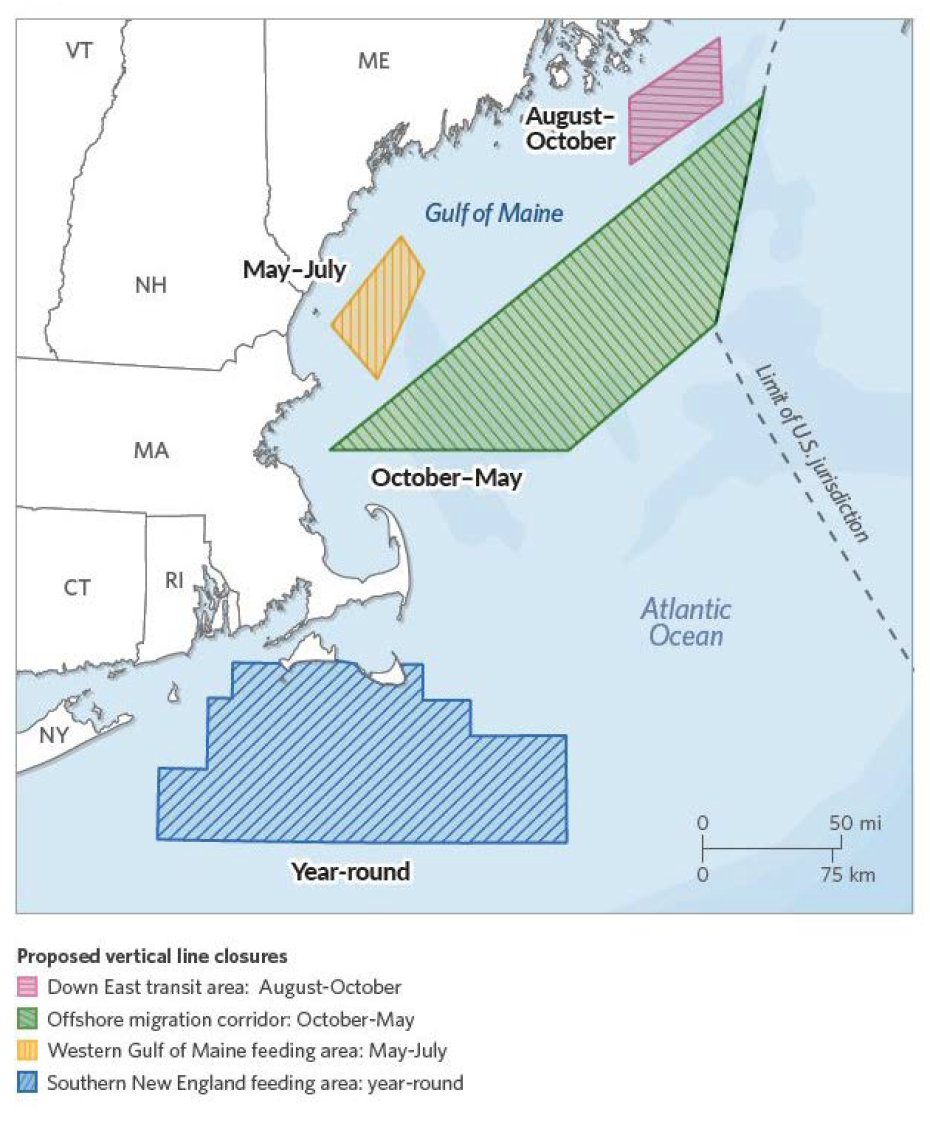 "Specifically, we request that you designate one year-round closure south of Martha’s Vineyard and Nantucket, and three seasonal offshore closures in the Gulf of Maine in which the use of vertical lines in the American lobster and Jonah crab fisheries is prohibited," the letter states. "The proposed areas have been scientifically identified as posing the greatest risk of entanglement to the critically endangered North Atlantic right whale."

Although U.S. gear has not been tied to right whale mortalities in recent years, the species migration into the Gulf of St. Lawrence has resulted in a high rate of right whale deaths from ship strikes and entanglements with Canadian crab gear. The petition carefully lays out the risk (rather than result) of entanglement with U.S. gear and points to the high mortality rate without drawing a straight line between the two.

"For the reasons demonstrated in the enclosed petition for rulemaking, we ask that the secretary immediately implement these interim regulations under the mandates of the MMPA and the authority provided by the ESA and MSA," the letter states. "Doing so will substantially reduce the risk of entanglement in trap and pot fisheries in the United States and help secure a future for this iconic species."

The request comes at a time when the nation's fishermen are already struggling to cope with flagging markets and increased risks resulting from the coronavirus pandemic. But it does not stop at these closures. The petition goes on to suggest trap and vertical line limits as a complement to these closures.

"We also request that through the permanent rulemaking the Secretary consider and implement additional measures that would complement vertical line trap/pot closures. Alternatives for such measures should include trap reductions and vertical line limits that cumulatively, with vertical line closures, will reduce take below the legal thresholds, including alternatives identified through the 2019 scoping to initiate rulemaking under the MMPA," the petition states.

U.S. lobster fleets and fishery leaders have long been leaders in reducing interactions with marine mammals, often voluntarily implementing expensive gear changes, and time and area closures. The fleets targeted by the petition have also been working through NMFS' Atlantic Large Whale Take Reduction Team to develop a NOAA-mandated 60 percent reduction in vertical lines in the water.

"Why are they bringing these proposals forward at this point?" asked Dave Borden, executive director of the Atlantic Offshore Lobstermen's Association and an Area 2 lobsterman. "Pew as an organization never offered a comprehensive fix that I know of."

Atlantic commercial lobstering organizations are also working on a deadline to provide material for a federal case and did not receive notice on the petition from Pew.

"They did not distribute a copy to us," Borden said. "I've been working on the depositions for the right whale case that are due tomorrow."