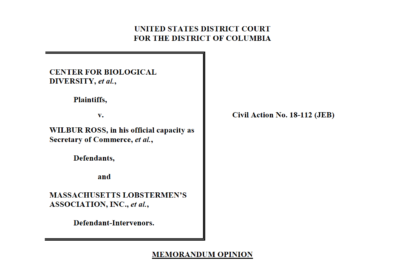 The federal lawsuit challenged a biological opinion filed by NMFS in 2014 stating that the American lobster fishery “may adversely affect, but is not likely to jeopardize, the continued existence of North Atlantic right whales.”

The judge ruled against NMFS, noting that the agency failed to include an “incidental take statement.” That failure, the judge declared, renders the biological opinion illegal under the Endangered Species Act.

The suit — filed by the Center for Biological Diversity, Conservation Law Foundation and several other environmental groups — is similar to the California Dungeness crab lawsuit (led by the Center for Biological Diversity) which also claimed the fishery violated the ESA. The finding there forced the crab fishery to file for an incidental take permit, a process that can take years, and negotiate with the plaintiffs on whether there will be fishing seasons in the interim and what those opening and closing parameters will be.

Fishing leaders in the California fishery have worked for many years with other stakeholders in a gear working group to find gear solutions to interactions with marine mammals.

The Center for Biological Diversity was a member of that group, which made the sting of the lawsuit that much harder for the fleet.

The fleet has taken some extreme measures to ensure that its season works around whale migration patterns to prevent a complete shutdown.

A 2017 spike in Atlantic right whale deaths caused in part by the population's migratory shift into Canada's snow crab and lobster grounds put U.S. fleets back into the spotlight and left them susceptible to lawsuits despite years of efforts to work with environmental groups, federal agencies and scientists to ensure a fishery with minimal interactions.

At an open forum with NOAA leadership at the Maine Fishermen's Forum in March, stakeholders pressed the agency on its drive to enforce gear changes (through the Atlantic Large Whale Take Reduction Team) that could endanger the lives of fishermen with little evidence that the changes would save any whales. 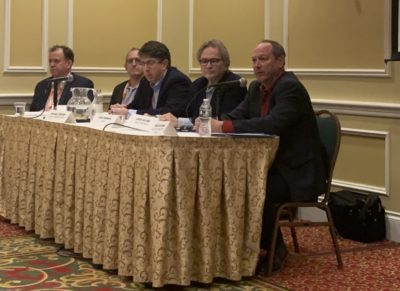 "If the right whale population is so dire how can the agency justify targeting only the lobster fishery?" Patrice McCarron, executive director of the Maine Lobstermen's Association, asked the panel.

"It's not within our control to force Canada to take action," replied Chris Oliver, NMFS administrator.

“The Massachusetts Lobstermen’s Association is reviewing carefully the Court’s summary judgment ruling on liability," the association, which intervened in the case in 2018, said in a statement. "The MLA expects to submit briefing to the court during the remedy phase of this proceeding to protect the rights and livelihood of the lobstermen it represents.”

The Maine Lobstermen's Association, which also intervened in 2018, released a statement on the ruling on Monday, April 13.

“Until now, the court has only heard from the environmental groups and the federal government. They have not yet heard the fishing industry’s perspective,” noted McCarron. “The MLA and its legal team are uniquely positioned and well prepared to educate the court on the Maine lobster fishery’s long-standing efforts to protect right whales and insist that decisions that affect our fishermen are based on the best available science."