Industry innovations abound, from the Deckhand, a new product that makes it easier to log vessel trip data to Rugged Seas, a new bib-recycling venture that incorporates discarded bib scraps into a variety of rugged and well designed bags that work just as well on the trail as they do in your bunk belowdecks. 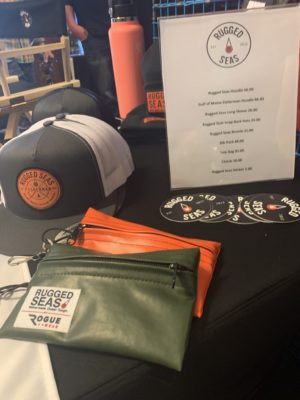 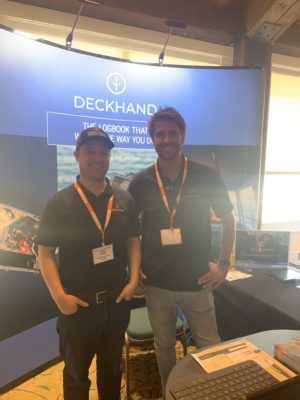 Simon Dick of Deckhand gets the farthest-traveled award for coming to Rockport from Australia, no doubt washing his hands all the way.

Groundfish monitoring is working, but does it matter?

Despite years of ever-increasing monitoring, cooperation from the fleet, and catch-shares-induced consolidation, the New England groundfish industry is still on shaky ground. See the full story here>>

Herring is not looking great.

Granted, this is not exactly a hot take.

The good news is that despite landings slipping from a historic 80,000 to 100,000 metric tons annually to less than 20 percent of that for 2019, the 2018 benchmark assessment determined the stock is not overfished and overfishing is not occurring.

However, by summer 2020 council will have an update on a management track assessment — which means they are looking at the science sooner than scheduled. They will be incorporating data from 2018 and 2019  into the model. That means two poor years will be added to the assessment, which increases the possibly that the fishery could get pushed over to overfished status.

Under Framework 8, if the spawning stock biomass falls below 20 percent of target, the fishery shuts down.

Maine groundfish captain Terry Alexander reported during public comment in the session that "the guys saw a lot of small herring in the seines last summer," which could bode well for future recruitment into the fishery. However, the stock assessment is showing slow rates of growth. 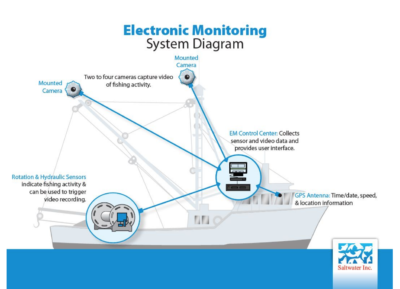 Maine's lobster landings were down in 2019

The bad news is that Maine's lobster landings were down about 17 percent for 2019. The good news is that they were still above 100 million pounds, and the value slipped by less than 2 percent for a total of $485 million.

2019 ranked as the fourth most lucrative year on record.

In a session on lobster science, Maine's Department of Marine Resources staff showed that lobster is king for the state's scientists, too. DMR staff collect lobster data on all stages of life, from larval to sublegals to the breeders protected by Maine laws. 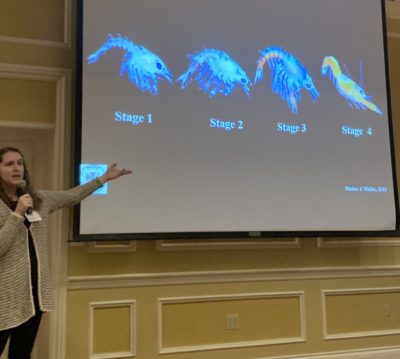 A tagging project seeks to determine the range of Gulf of Maine and Georges Bank lobsters and track their rates of growth. DMR also tracks water temperatures, molting, fishing effort, landings, all to the benefit of the fishery.

University of Maine Professor Rick Wahle's American Lobster Settlement Index tracks biomass throughout the region, which is used to make historically accurate predictions of the biomass of Homarus americanus.

NMFS director Chris Oliver and cohorts hold their own

In the NOAA-hosted open forum with managers, a panel of speakers led by NMFS director Chris Oliver more than held their own as their feet were held to the fire primarily on right whale protection measures. 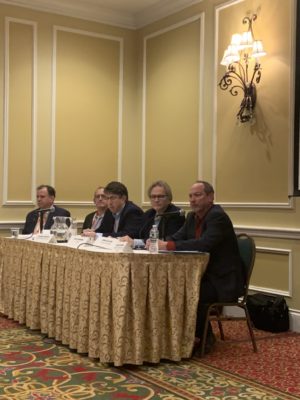 Oliver led the session with an anecdote about his responsibility to the commercial fishing industry.

"Someone said it isn't your job to be looking out for the fishermen's best interest, and I said the hell it isn't," Oliver told the crowd.

Oliver and Regional Administrator Michael Pentony both apologized for their response to Maine's proposed adjustment to its right whale risk reduction package being treated in the press as a rejection.

"I'm sorry my letter to [Maine Department of Marine Resources] Commissioner Keliher was read as a rejection because it wasn't," said Pentony, who leads the Greater Atlantic Region Fisheries Office in Gloucester, Mass.

Fishermen voiced concerns about safe operations under new management guidelines in a range of fisheries and at one point erupted in a yelling match about right whale risk reduction. 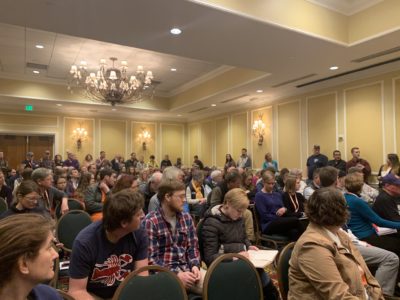 A packed room turns out to pitch tough questions at the NOAA leadership panel.

"You take this away from us and our communities die," said Julie Eaton, a Stonington/Deer Isle lobsterman. "Maine's leading this fight. What we're doing is working. Maybe other places ought to do the same."

"Exactly. What we're trying to do is make sure you do still have a fishery and you can still go fishing," said Oliver.

Last year's session on scallop mariculture in the state centered on investments in Japanese technology that improves the process for growing scallops on longlines. 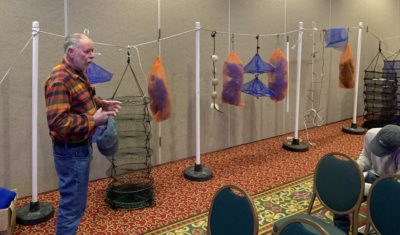 This year, the session focused on what Maine's scallop growers are using for gear and best practices, from longlines to oyster cages and bags.

"The attractiveness of those grounds wasn't all that surprising but the council felt that it had to take some action," said Jonathon Peros, a New England council scallop plan coordinator and fishery analyst. 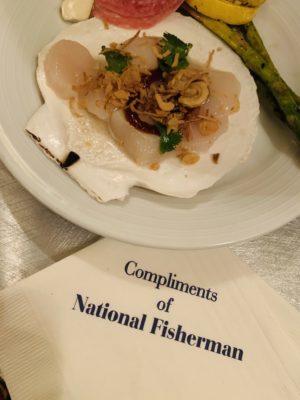 Togue Brawn's Downeast Dayboat Scallops from the Northern Gulf of Maine are fresh enough to eat raw on the half shell at the forum's seafood reception.

Amendment 21 to the scallop fishery management plan aims to establish new rules for allocating between user groups, support research on the stock through a research-set-aside program and likely change some rules to "minimize a derby," according to Peros.

"It's not a derby-style fishery. It never has been, and it probably never will be," said fisherman Jim West. "We figured out a way to make it safer and better for our small boats. I'm in a 40-foot boat. We cannot fish in big weather."

Peros estimated the number of return trips small boats made to avoid bad weather amounted to about 2 percent of the total trips in 2019. Fishermen like West still don't want to see those return trips taken away.

Representatives from across the industry attended and hosted a full-day session on proposed offshore wind-power projects that are creeping both north and south from Southern New England.

Annie Hawkins, executive director of the Responsible Offshore Development Alliance, and her board of directors advocate for the fishing industry on East Coast developments. They hope to offer their expertise in negotiating new federal permits that preserve access to fishing grounds. 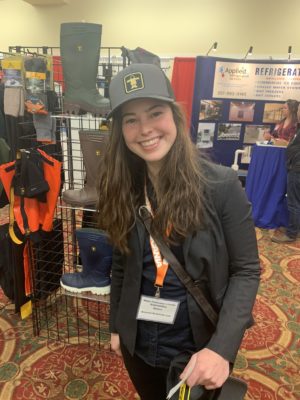 Sixth-generation fisherman Samantha Ames is on the verge of bringing her grandfather's boat back into the family.

Last but most certainly not least...

Young fishermen show us what the future looks like

Sixth-generation fisherman Samantha Ames, 26, of Matinicus Island is in the process of buying back her grandfather's wooden 40-foot lobster boat.

She learned how to fish from its decks and hopes to use the boat to expand into a range of mariculture fisheries — kelp, oysters, scallops, clams and eventually mussels.

The program is a supplemental and voluntary high school curriculum for young Mainers working in fisheries to provide the students with the core knowledge and skills to participate in co-managed fisheries, working with scientists and regulators to sustain the fisheries they depend upon as well as to run successful and adaptable businesses. The program is run by the Maine Center for Coastal Fisheries. 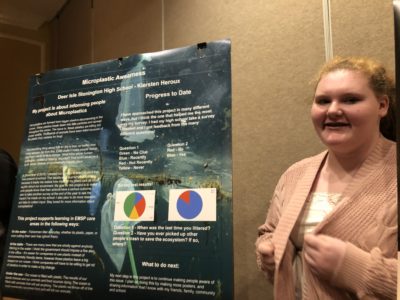 Kiersten Heroux of Deer Isle Stonington is writing a children’s book to increase awareness about plastic in the ocean. 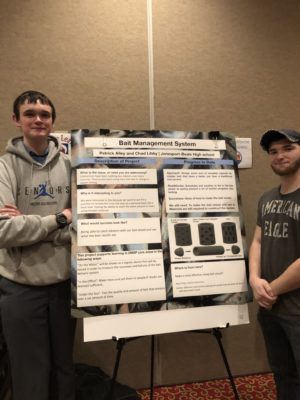 Patrick Alley and Chad Libby of Jonesport Beals HS hope to help fishermen get the most out of their bait, using the pair’s bait management system. 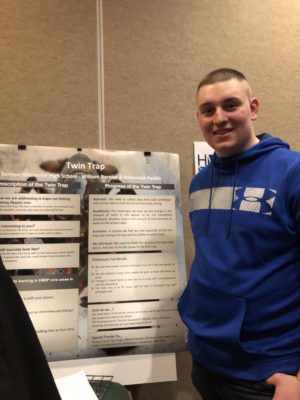 William Bernier of Sumner High School and his new lobster trap the fishes no matter how it lands on bottom.

NMFS pushing observer safety as it steps up Northeast coverage

NMFS pushing observer safety as it steps up Northeast coverage