Home / News & Views / National & International / Sexto Colectivo: It’s not what you might think

Juan Escalona set out to be a genomic biologist, but deep inside he wanted to be an artist.

“I can’t carry a tune, and I’m no good at painting, but I have always loved to cook,” says Escalona. After a few years of bouncing back and forth between biology and cooking, Escalona found a way to mix the two, with a focus on seafood. 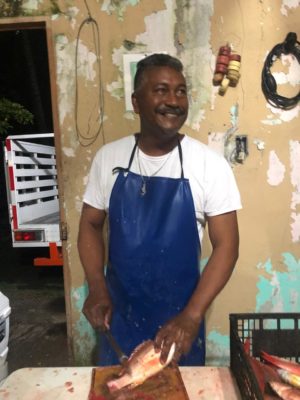 Catching small amounts of fish for niche markets puts a smile on Heriberto Reyes’s face. “People need to be willing to pay for what the life of a fish is worth,” says chef Juan Escalona.

“I started with a menu of 22 different kinds of fish on one side, and on the back, I had a phylogenetic tree that showed the evolution of all the fish. Some looked alike but were actually very different, and vice versa.” (Sort of the way Sexto Colectivo looks intriguing but actually means “sixth collective.” No sex.)

But a purely scientific approach was not enough for Escalona. “I wanted to know everything about the catching and killing of the fish, and how they got to us. So, I asked our supplier if I could go fishing with one of the fishermen in Veracruz.”

“I went out with a man named Heriberto Reyes, his son and another man. When I first asked his last name he said, ‘Heriberto Fish-Til-I-Die.’”

Reyes took Escalona out for 8 hours, half the time of a usual trip for the fishermen, but for the young chef it was eye-opening.

“At first I felt useless,” says Escalona. “But then they let me bleed the fish. And then they let me catch a fish.” It was the first fish Escalona ever caught, a small pink and yellow striped snapper called villajaiba (Lutjanus synagris, also known as lane snapper).

“I learned the value of fish,” says Escalona. “In taking its life, feeling it struggle I realized I had to give it my best in cooking it, and use everything.”

Sexto Colectivo’s mission is to turn fish into art and raise awareness about the real value of fish. At one of the groups’s pop-up dinners in Mexico City on January 29, Escalona and his team served 11 customers plate after plate of seafood from all around Mexico. Dishes included everything, even the heads and gelatin from the bones of biajaiba.

The team wants to do more, but whether Escalona will be able to source high quality fish in the future is uncertain.

“These fishermen are so skilled,” he says. “They can tell the species they have on the hook as soon as it bites. But they get paid almost nothing. Heriberto said he doesn’t want his children to go fishing. He said he makes money when he sells to Erik, but that is only once a week. He needs a good market every day.”

Escalona wants his customers to eat fish using all five of their senses – combined, they become a sixth sense, hence Sexto Colectivo.

“This is how people need to buy fish,” he says – meaning, with the understanding that comes from using all their senses.

“They should be willing to pay what the life of a fish is really worth.”