NMFS released two annual reports on Thursday, May 20, with stats on 2019’s landings and 2020 stock status. In the 2019 domestic fisheries economic report, called “Fisheries of the United States,” the top ports remained the same.

Alaska pollock has held Dutch Harbor in the top spot for landings. But wild salmon has the big story to tell for 2019, finally taking the lead for most valuable domestic species overall, which is especially notable because it is the only finfish in the top five.

This year, the report summarizes the top five 2019 landings by value: 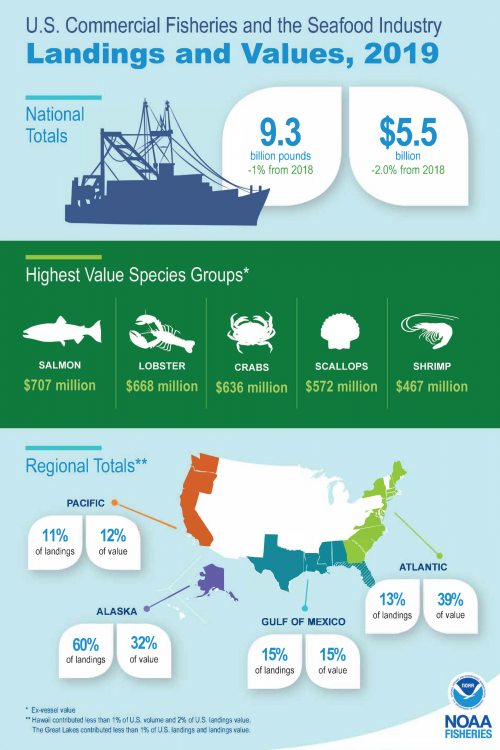 Last year, in the report on 2018 landings, the top five species by value were:

Unlike Atlantic scallops, which are landed primarily in New Bedford, salmon (like Northeast lobster) are landed in smaller ports across the region, so their high value is unlikely to push any single port into that top spot anytime soon.

The other report released today was the “Status of Stocks” for 2020.

Last year, our Overfishing and Overfished lists each increased by 1 percent. In 2019, 22 domestic fisheries (7 percent) were listed as experiencing overfishing, and that rose to 26 fisheries (8 percent) in 2020. The 2020 number is still lower than in 2018, when it was 28 fisheries (9 percent).

It is worth noting that the percentage of Overfishing/Overfished stocks is a reflection of the sheer number of fisheries monitored by the federal government (323 and 251, respectively) and not as a percentage of our landings. In other words, a small fishery counts the same as a large fishery in this report.

And as we must always note, overfished does not necessarily mean what it implies.

“Despite historically low fishing level in recent years, Atlantic herring was added to the overfished list because, since 2013, reproduction has been steadily declining to record low levels,” the report summary says.

That 20 percent number no doubt will be used against the fishing industry, despite the fact that it’s not exclusively a fishing-based designation.

The federal agency is also working to improve its data collection and understanding of some fisheries, so new modeling methods or collaborative research may change a stock status in either direction. 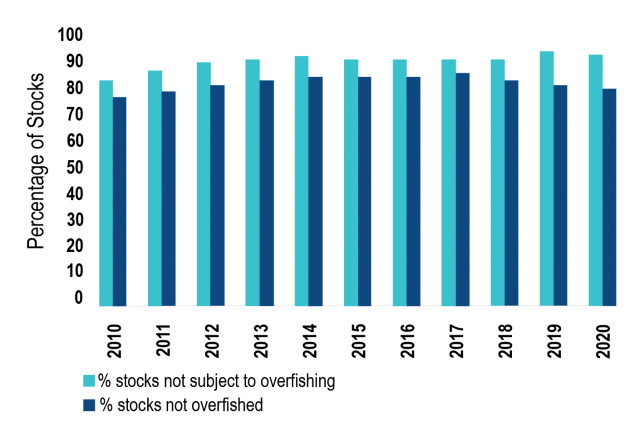