Commercial fisheries report: Alaska salmon reigns as the top finfish in the nation

According to NOAA's annual report on commercial fisheries landings, production and value, the top five species in order of value are: 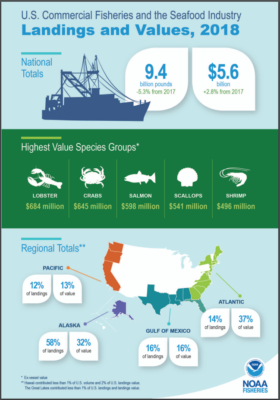 Alaska produces the overwhelming majority of our nation's wild salmon landings (more than a third of which comes from the imperiled Bristol Bay region), topping out at just over 650 million pounds of salmon worth $595 million in 2018. That means Alaska salmon alone takes that same spot as the top-value finfish in the nation.

Alaska pollock, which helped lock in Dutch Harbor as the top port by volume for the 22nd year running, is the sixth most valuable species on the list at $451 million in value for 3.4 billion pounds landed.

That helps keep Alaska squarely at the top for fish landings by region with 58 percent of the nation's total of 9.4 billion pounds (down from 9.9 billion pounds in 2017), though that tally is down slightly from the state's 61 percent share in 2017.

The state also takes the top spot for value with $1.8 billion over Massachusetts' $647.2 million. Maine comes in third with $587.4 million, thanks to lobster landings.

However, New Bedford, Mass., scores as the top port by value for its 19th year, thanks to landings of Atlantic sea scallops. Second place was Empire-Venice, La.

Commercial fish landings values were up almost 3 percent at $5.6 billion, despite the volume going down by just over 5 percent.

"Our nation’s fisheries are a critical component of the blue economy and contribute greatly to economies, recreation, tourism and jobs," said Laura Diederick, a communications specialist with NMFS. "We are grateful for the partnerships we have built over the years to ensure this industry continues its sustainable growth."

View the full report at NOAA.