The future of California’s iconic Dungeness crab fishery seemed uncertain after a three-year spike in the number of whales entangled in fishing gear from 2015 to 2017. A warm-water blob, domoic acid and a coinciding of whale migrations and fishing caused by the delayed start of the Dungeness crab season spurred a record number of whales and other marine animals to become twisted in crab gear.

Few fisheries were spared entanglement issues on the Pacific Coast, but California Dungeness crab fishermen came under fire for their lines snaring the largest number of whales. Negative publicity, threats of a federal shutdown and a lawsuit in federal court made California crabbers fear the worst.

But with ocean conditions returning in the direction of normal and state legislative effort looking to head off litigation, crab fishermen can breathe easier. Still, there’s no returning to the way things were.

A fisheries omnibus bill making its way through the California Legislature, (S.B. 1309) would give the director of the Department of Fish and Wildlife the ability to implement emergency closures in the Dungeness crab fishery when there’s a “significant risk” of entanglement in a specific area.

The new powers to close the fishery when there’s a threat to marine life would only be effective until November 2020 when the legislation calls for new regulations to be implemented based on the proposals of the California Dungeness Crab Fishing Gear Working Group — consisting of commercial fishermen, state and federal biologists and NGO representatives.

The director of Fish and Wildlife would have to give 48 hours’ notice before any closure and would have to allow feedback from the crab gear working group. 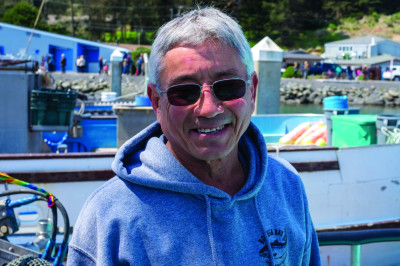 “We are working so hard as a fishery. Nobody wants to entangle a whale.”
— Dick Ogg,
California Dungeness crabber

“The fleet is protected from all but the most dire circumstances,” said Noah Oppenheim, executive director of the Pacific Coast Federation of Fishermen’s Associations and the Institute for Fisheries Resources. “But this is going to come as a major shock to a lot of people because this is the first time a fixed-gear fishery is managed this way.”

In 2015, 50 whales, including humpback, gray and blue whales, were confirmed to have become entangled in fishing gear — although the total increased to 62 when unconfirmed instances were included — up from an average of less than 10 annual entanglements recorded in the 15 years prior.

The California Dungeness Crab Fishing Gear Working Group was created in September of that year by the California Department of Fish and Wildlife, in partnership with California Ocean Protection Council and National Marine Fisheries Service. The goal was to have the not-always-harmonious mix of stakeholders, including members from the environmental groups Oceana and Earthjustice, to find ways to reduce negative interactions.

But domoic acid levels delayed the opening of the 2015-16 crab season until March 2016, and the number of entanglements remained high for the year with 48 confirmed whale entanglements and a total of 72 including unconfirmed instances.

Numbers in 2017 were down, but still above historic norms, with 31 confirmed entanglements on the West Coast and 10 unconfirmed instances.

While not all the entangled whales were spotted in California or were pulling Dungeness crab gear, some believed the spike in entanglements put the California fishery in violation of the federal Marine Mammal Protection Act and the Endangered Species Act.

The increase in entanglements was likely the result of multiple factors: An algae bloom sparked by El Niño conditions created high levels of the neurotoxin domoic acid in shellfish and Dungeness crab that delayed the start of the crab season in California for the 2015-16 season.

During that time, the warm-water blob in the Pacific Ocean led to lower levels of krill for baleen whales to feed on and also pushed bait fish and other sources of food for whales, like sardines and anchovies, nearshore. A heavy fishing effort in the spring months combined with an increased presence of migrating whale feeding on schooling fish in shallow waters likely led to a perfect storm of ocean conditions causing the increase in entanglements.

The Dungeness crab season in California has typically run from November to March, while migrating humpback, gray and blue whales have passed through California waters from March to November.

“Historically, there hasn’t been a lot of overlap” between migrating whales and Dungeness crab fishermen, said Karin Forney, a scientific adviser for the working group and a National Oceanic and Atmospheric Administration biologist.

While some fishermen concede that more fishing gear in the water at a time when there is an increasing number of whales boosts the likelihood of entanglement, most are adamant that whales and fishing can coincide without negative effects.

“People at the working group know that whales and gear can co-occur,” Oppenheim said. “This isn’t about saying where whales are gear can’t be. That’s absurd to think that’s a solution to this problem.”

While biologists have sought to understand why the spike in entanglements has occurred, fishermen like Dick Ogg, a member of the working group and a fisherman from Bodega Bay, have looked for ways stop negative interactions by changing the gear they set in the water.

“I think we are evaluating every option we can possibly put together: line profile, buoy, length, the number of buoys,” Ogg said.

Ogg and others in the working group have established best practices for setting gear in a way to mitigate entanglements. This means keeping gear tight and only using the bare minimum in scope. It also means using fewer buoys, reducing the distance between the main buoy and the trailer, and making sure there’s no excess floating line on the surface.

While the tight gear setup might reduce the number of fishing days with gear going under water in high winds, it’s a small price to pay by not going afoul with whales and other marine life.

While the legislation pending in Sacramento doesn’t enshrine any of the best practices being developed by Ogg and other fishermen into law, it creates the pathway to do so in two years. Having gear setups micromanaged by government officials isn’t a satisfactory solution for most fishermen. But some alternatives are worse, said Oppenheim and Ogg.

In October 2017 the Center for Biological Diversity filed suit against the state of California in federal court, arguing the Dungeness crab fishery is in violation of the Endangered Species Act because of increased whale entanglement.

A press release from the NGO to announce the legal action set in motion a public relations battle with an attorney stating: “Dungeness crab dinners shouldn’t come with a side of whale... California officials can’t let this minefield of crab traps continue to slaughter endangered whales and sea turtles.”

Oppenheim fears the suit might set the groundwork for a federal takeover of the state-managed fishery or would establish a federally managed Take Reduction Team at the least.

After filing a motion to intervene, the Pacific Coast Federation of Fishermen’s Associations and Institute for Fisheries Resources have taken over from the state as the main defendant in the case.

The hope is the power granted to the director of Fish and Wildlife to close the crab fishery when there is a significant risk for entanglement in S.B. 1309 will satisfy the Center for Biological Diversity’s demands and result in a settlement of the case, Oppenheim said.

The first six months of 2018, NOAA has preliminarily reported a total of 19 confirmed whale entanglements on the West Coast and three unconfirmed — a number still above average and enough to cause trouble for the fishery.

The California Dungeness Crab Fishing Gear Working Group continues to move forward, and members once at great odds are now finding common ground for ways to keep the fishery going and whales safe.

“To me, this the best way to go because fishermen are the best people to identify long-term solutions,” Forney said of the working group. Multi-stakeholder groups “are a slow process and sometimes it feels like we go around in spirals. But in the end it’s the best way to fix problems.”

Ogg, who owns the Karen Jeanne, was once fearful for the fate of his fishery but is happy with the work done by the working group.

“I just want to express how proud I am of the work we’ve done,” he said. “It’s not easy to change what you’ve done for 40 years, and everyone [in the group] seems to want to keep us fishing.”