After the first day of the Local Seafood Summit, attendees were treated to a seafood spread that was the envy of all Portland, Ore., foodies.

With salmon being grilled from Sitka Salmon Shares next to tuna from Trefin Day Boat Seafood and a plethora of shellfish options from Blue Siren Shellfish Co. and Georgetown Island Oyster Co., among other community-supported fishery businesses, no one turned in for the night with an empty stomach.

And this group needed it, because day two of the summit was all business.

The workshops slated for the day covered near all aspects of starting and running a community-supported fishery. Talia Young and Tasha Palacio, of Fishadelphia, a youth-coordinated, community seafood program based in Philadelphia, addressed the common challenge of extending the reach of CSF work beyond wealthy, high-end consumers, and focusing on how to support affordable seafood options.

Andrea Tomlinson of New Hampshire Community Seafood moderated a panel discussion on revitalizing the concept of “catch of the week” and how to find restaurants and chefs to support local values-based seafood operations. And Sarah Shoffler of NOAA’s Southwest Fisheries Science Center led a panel focused on building social capacity within cities how local fishing associations can boost marketing efforts to build a better local market for their catch.

A full list of the days workshops with information on organizations and representatives involved can be found online. Be sure to reach out to any organizer listed if you’re interested in getting a first-person account of the discussion. 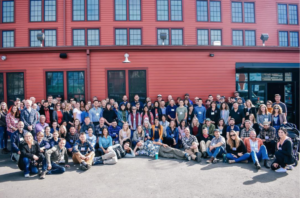 While organizers with the Local Catch Network were focused on these workshops and networking with current attendees, they turned the focus on the state of their network in the morning and sought feedback from attendees on how the network.

“The discussion I’m hoping we can have is — how do we create opportunities for people in the network to step out of their own daily context and learn from other people, said Joshua Stoll, a professor of Ecology and Environmental Sciences at the University of Maine and a member of the Local Catch Summit steering committee. “How can we do it not just through summits like this but in smaller and more frequent contexts?”

Through a series of roundtable discussions, attendees discussed the challenges of reaching more people. It was suggested that the Local Catch Network develop a database to house information on launching and maintaining a community-supported fishery that could be accessed by all. A mentorship program was also considered — those interested in launching CSFs could be partnered with an established champion in the space to learn and grow their operation from an experienced leader.

There were talks about how the network can expand to assist CSFs globally, potentially partnering and assisting groups such as Low Impact Fishers of Europe.

Another roundtable discussion focused on ways to improve Local Catch’s seafood finder map, a worldwide map where CSFs can input their company info and be represented. One thing fishermen were interested in is developing a map that was more customer-facing — something that was deemed as important in all aspects of the network’s operations. Right now the map simply lists business headquarter locations, but fishermen suggested in would be more valuable if customers could search the database by pick-up location options or by species.

“Right now Local Catch has been focused on connecting with each other,” said Taylor Witkin, the network’s managing director. “But as we grow we realize that we need to develop tools for businesses to communicate with their customers and to spread these CSF values.”

This was Local Catch’s first event on the West Coast since it’s launch in 2011 and one goal of this year’s event was to gain support from Pacific fishermen and operations to expand the network and include more voices. In the future, the network could expand to include other aspects of the industry like seafood processors and marketers.