On Saturday, Nov. 9, the 54-foot troller Miss Hailee capsized with four crew onboard about 30 miles northwest of Bodega Bay, Calif. A Coast Guard rescue swimmer retrieved two men and a woman from the water about three hours after the first EPIRB signal was picked up at Coast Guard Sector San Francisco just after 3:30 p.m. 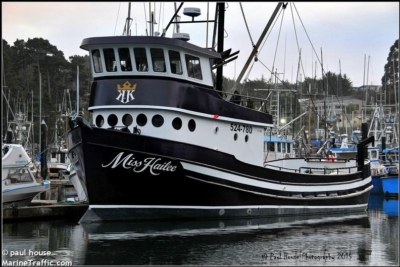 The 54-foot troller Miss Hailee was built in 1970, based in Fort Bragg, Calif., and was known to be well-maintained. Paul House/MarineTraffic.com photo

The Coast Guard suspended the search for the missing fourth crew member on Sunday, Nov. 10 after 16 hours of overnight searching that covered about 368 square miles.

“The decision to suspend a search is extremely difficult, and our thoughts are with the missing man and his family at this time,” said Capt. Marie Byrd, the sector San Francisco commander.
The troller’s crew was based in Fort Bragg, about 100 miles north of Bodega Bay, where the vessel capsized on Saturday afternoon. Water temperatures were about 50 degrees in the search area, but the Coast Guard could not confirm whether the missing crewman was wearing a wetsuit or a drysuit, which would affect survival time.
The area’s Dungeness fleet is allowed to drop pots on Nov. 21, but the boat’s mission in Bodega Bay was not confirmed.