A taste of the working waterfront

The Working Waterfront Festival returned to New Bedford, Mass., on Sept. 23 with locals and visitors from afar filling the waterfront to dive into a taste of the fishing life and learn about the port’s commercial fleet.

Conditions at sea from Tropical Storm Jose had pulled in most of the local fleet that week, but the clouds didn’t stop hundreds of people from lining the docks.

“We’ve got a visitor here this week named Jose,” said festival director Jessica Bailey, “but hopefully he won’t be here too long.”

The waterfront and pier were lined with tents hosting a variety of vendors selling seafood, fishing and coastal themed decor, clothing and jewelry. Representatives from regional NMFS offices, the U.S. Coast Guard and the Massachusetts Division of Marine Fisheries were around to make introductions, listen to concerns and teach the community about what they do. The Fishing Partnership and Massachusetts Lobstermen’s Association had tables up to connect with fishermen and visitors alike.

Down on the Steamship Pier stage a crowd was gathered all day as events rotated in and out. The Sea Chantey Chorus busted out a lineup of folk songs that drew people in for the following link squeezing contest and scallop shucking demonstration.

With the fleet tied up, fresh scallops weren’t available for the regular contest, so the event became a one-man show. With an extra two years to practice, the 2019 contest should be quite a sight. 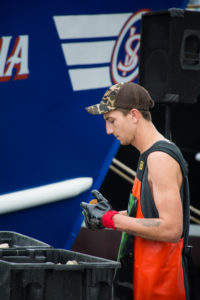 In lieu of a contest, visitors were given a scallop shucking demonstration. 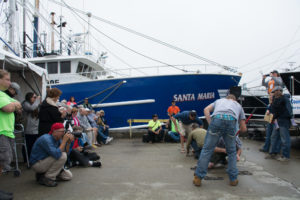 Fishermen showed off their nautical tattoos on stage as well, competing to see who had the most seaworthy ink.

Just past the stage, visitors boarded and toured a local scalloper, inside and out.

Despite all the amazing events throughout the day, the food court might have been the crowd favorite. From plates of scallops, crab cakes and lobster tacos, there were almost too many dishes to try (at least if you wanted to leave without an empty wallet).

A man overboard demonstration gave visitors a chance to learn about marine safety and rescue operations.

A shuttle brought visitors to the New Bedford Fishing Heritage Center just a few blocks away all day long. The center serves as a one-stop shop to preserve the local fishing industry stories through exhibits and regular programming.

The “From Boat to Table” exhibit allows for those unfamiliar with the industry to get a crash course in how all that delicious seafood gets from the ocean to their plate with displays explaining gear types, the management process and how fish come to market.

Photographer Phil Mello is currently exhibiting “Nautical Tattoos and the Stories Behind Them,” a series of portraits showcasing some unbelievable tattoos. It’s only up until Oct. 1, so be sure to check it out this weekend if you’re in the area.

There’s also a display wall with a curated list of nicknames heard along the New Bedford waterfront over the years. (There were quite a few fishermen who were dubbed “crazy,” of course.)

While you may have missed this event, you can still talk to and visit all of the people, organizations and locations involved with the festival. A one-day celebration can’t represent how much the city of New Bedford embraces the local fishing fleet and the community is as supportive as ever.

If you’re on the East Coast, don’t wait two years for the next festival. Get on over to New Bedford to explore the culture on your own whenever you get the chance.

More Than a Job: New Bedford’s work and community

More Than a Job: New Bedford’s work and community