If you find it hard to imagine a college professor (of a subject other than epidemiology) drawing a crowd nowadays, I’m with you. Yet that is exactly what fisheries scientist Ray Hilborn did April 2.

It’s conceivable that the size of the audience reflected a degree of covid-19-inspired restlessness. But ennui alone cannot explain the more than 450 people who signed up for Hilborn’s presentation on the status of fish stocks and the role of management. And rather than dwindle, as webinar audiences tend to do, by the time the session ended Hilborn’s audience had swollen to “an easy 600,” according to NOAA’s Tracy Gill, who coordinated the event. 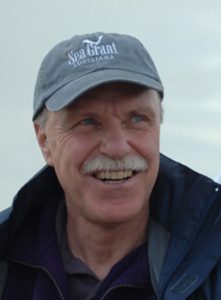 To be fair, Hilborn was no stranger to his audience. A professor of aquatic and fishery science at the University of Washington, he’s written several books, including, most recently, “Ocean Recovery: A Sustainable Future for Global Fisheries” (co-authored by his wife, Ulrike Hilborn) as well as scores of peer-reviewed papers, and is respected by industry, academics, and NGOs.

His message Thursday was reassuring – more or less. Listen to scientists long enough, and you realize that you can get yourself into trouble reading between the lines.

Many of you, for example, will recall how in 2006, mainstream journalists leveraged a study led by the Canadian ecologist Boris Worm on the loss of biodiversity in ocean ecosystems services into the disappearance of fish by 2048. “One very small part of the paper,” Hilborn recalled, extrapolated from catch trends and came up with a downward curve that “hit the y axis,” in the professor’s words, at 100 percent collapsed in 2048.

The New York Times, Washington Post, Time and other media found this calamitous and irresistible. Hilborn, among other scientists, pushed back, but to no avail.

“It is much easier to get a paper published that has doom and gloom in it, rather than one that is more optimistic,” Hilborn observed. “It was probably one of the most impactful papers in fisheries ever published.” 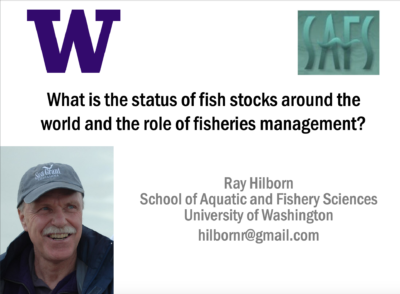 As things turned out, though, Hilborn and Worm wound up discussing their perspectives on NPR. “We identified very quickly that people in the fishery science world, like me, tend to look at the abundance of fish stocks, whereas their paper was focused solely on the catch.”

So, they put together a group that looked at abundance using stock assessments and scientific surveys. “We found that when you looked at the abundance of fish stocks, we did not see such a [downward] trend,” Hilborn said, and in 2009 they published, “Rebuilding Global Fisheries.” Specifically, he said, they saw some decline in the 1970s, but after 1980 or so, “overall we saw… no statistically valid evidence of a decline.”

Worm bet Hilborn a bottle of champagne that this rather more upbeat study would make the front pages of the same newspapers and magazines that had proclaimed the fish apocalypse. Hilborn took the bet, and two months later he drank the champagne. “We didn’t make the front page of anything,” he said.

Work on the database has continued over the last 15 years, and it’s now public and available at www.ramlegacy.org, a URL in honor of the late Ransom Myers, a colleague of Worm’s with whom Hilborn also worked, and who in the 1990s first attempted to assemble a global database of fish stocks. Most of the world is covered. “The big gap in our understanding is south and southeast Asia,” Hilborn says.

In January, as a derivative of this effort, Hilborn and others published a paper, “Effective fisheries management instrumental in improving fish stock status.” The group reports that fishery abundance is improving and effort is declining. It’s important to note that abundance levels vary across regions and fisheries, but “on average,” Hilborn says, we are above targeted levels of abundance and below targets on effort. “The takeaway message is, fishery management works if it’s applied.

Across Europe, the United States, Canada, and Japan, Hilborn says, “There is almost no yield lost from fishing too hard.” But in a nod to the vagaries of economics, he notes that underfishing – fishing below maximum sustainable yield – imposes societal costs, just as overfishing does.

“The perception is that the real problem in terms of sustainable fishing is fishing too much, [but] if we’re interested in producing food, actually we’re losing more by fishing too little.”

But “social objectives are complicated,” he acknowledged, and “much more than maximizing the volume of fish we catch.”

Jerry Fraser is a retired commercial fisherman, journalist, editor, and publisher of National Fisherman, as well as a 2020 NF Highliner award winner.