The 13th named storm of the 2018 season started to form in the Caribbean on Oct. 2. By the ninth it had spent two days building up strength in the Gulf of Mexico, and the storm was a major bloody monster, a Category 4 and heading right for my home in the Florida Panhandle. The storm made a slight course correction to the East, sparing my small piece of Florida waterfront, and instead slammed like the hammer of the gods into Mexico Beach on Oct. 10 as the third most powerful Atlantic hurricane to make landfall in the United States.

Hurricane Michael packed a major punch of winds recorded at 155 mph, killed 45 people in our country, and caused as much as $14.5 billion in damage and more than $3 billion in insurance claims.

My tuna season was over Oct. 5, and I was scrambling to put the boat away and make it home. I ended up just winterizing the engine and leaving the boat in the hands of Gloucester Marine Railways to haul and block up on the hill. I got back to the panhandle three days after Michael tore through the area. 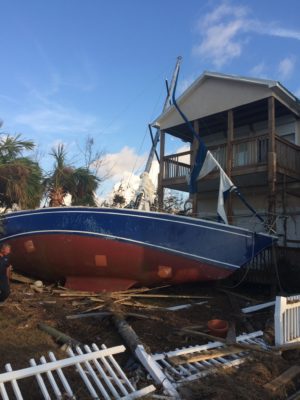 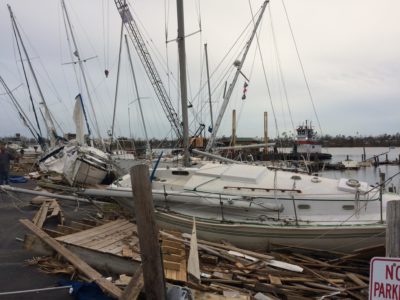 Hurricane Michael packed a major punch of winds recorded at 155 mph and cause an estimated $14.5 billion in damages. 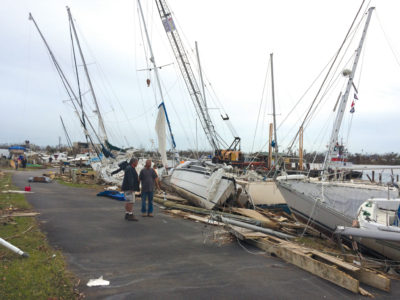 I have a good friend here who owns a salvage company, and I found myself on his tug and crane barge heading though the Intracoastal Waterway the next morning. Going under the Route 77 bridge, Michael introduced himself to me. I parked that 150-foot barge and tugboat on the beach at 6 knots right between the red and green markers. Where there should have been 15 feet of water, there was less than 5. The storm piled up mud, trees and god knows what else under that bridge. It took us a few hours to become unstuck, contact the Coast Guard, and report the position and new depth.

As we rounded the corner into Panama City waterway, the effects of the storm were front and center. I have never seen anything like it. When we neared our destination of Watson Bayou, I saw the North Star on her side across from Eastern Shipyard. I almost took out a half-sunk navigation buoy because I could not take my eyes off that boat. The most advanced factory trawler ever built was lying on her starboard side in 20 feet of water.

The trawler North Star lay on her starboard side from Oct. 10 to Dec. 5. Corky Decker photo.

The boat was nearly a finished product, ready for sea trials, and making the run around to Seattle within a month of this storm’s interruption. (Now finally righted in the first week of December, she will need to be rebuilt.) Eastern Shipbuilding is somewhat back online.

Two full months after I arrived home, I was still hard at it seven days a week. We dig out one back bayou and move on to the next. I’m a commercial fisherman, and my heart goes out to the Florida fishermen I have met these past two months.

Some of these guys lost their homes and boats and have so little insurance that they are forced to start over with next to nothing in working capital. We help out where we can. We have salvaged what is left of their boats more than once for free, but that is really little, just a token of what they need. This has been a huge wake-up call to me and my own operation.

I’ve been meeting fishermen who were doing pretty well, owning a couple, three boats in a nice little waterfront family operation. They carried the minimum insurance on their property and boats and now are living in a FEMA trailer and just trying to piece together a single boat out of the wreckage.

Lesson learned that insurance is not the place to save money: Insure your operation for replacement costs at the very least. I’ll be at this salvage until I head back to New England for 2019 bluefin season in June, and I’m sure I’ll be leaving behind people still in need of help. This was one hell of a storm.

Who We Are: Jacob David Hulse

Who We Are: Jacob David Hulse