It’s not a fishing club that anyone willingly joins, but once you’ve met the requirements you are a member for life.

Some recent inductees include the crabber Imperial on Nov. 19, 2018, the crabber St. Dominick on March 6, 2017, and the crabber Savannah on Feb.16, 2015. The only membership criteria that needs to be met is that the fishing vessel be involved in an accident with fatigue as the primary cause.

The Freyja (formerly the Miss Corrine) is the newest member. She was inducted on March 9, 2019, when the 58-foot cod longliner, slammed into the rocks near Point Tebenkof on the island of Unalaska in the Aleutian chain.

The Freyja was based in Kodiak, Alaska, and fished out of Dutch Harbor. She had a four-man crew — three deck hands and the captain who was also the boat’s owner. Experience varied: the captain had 25 years, one deckhand 22 years, another 17 years, while the third deckhand was on his first trip and was new to fishing in Alaska. 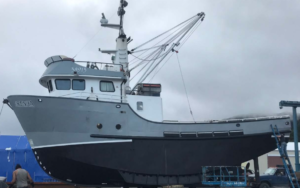 The 58-foot cod longliner Frejya, shown on the hard before her accident. Monson Fisheries photo.

On March 7, the Freyja left Dutch Harbor between noon and 1 p.m. About 4 p.m., she anchored to give the cod bait time to thaw. Then after setting the gear, the Freyja, which was one to 2 miles offshore, was jogging at about 1.5 knots as the gear soaked.

The crew turned in except for the new member who had the first watch. He would be responsible for waking his relief. There were about 10 minutes left on his watch, which was due to end at 11:30 pm, when he fell asleep.

The Freyja had a bridge watch alarm that required the person on watch to set the alarm for certain intervals to prevent him from falling asleep. The guy at the wheel that night said he did set the alarm to go off every 10 to 15 minutes.

But if the alarm went off, he never heard it, and didn’t wake up until three hours later when the Freyja slammed into the rocks on the western side of Driftwood Bay, near Point Tebenkof.

Attempts were made to free the Freyja from the rocks but to no avail. Breaking waves between 7 and 20 feet were hitting the Freyja, making it impossible to launch the life raft. The Alaskan Pearl, a nearby fishing vessel, received a mayday call and showed up about 2:30 am. In teams of two the Freyja’s crew swam to the Alaskan Pearl. The 40-year-old Freyja was salvaged that summer but was considered a total loss.

In weeks prior to the accident a member of the crew said they had been averaging 3 hours of sleep every 24 hours. The captain said he “gave the crew four hours of rest at a time when he could.” Either way you have chronic fatigue.

The National Transportation Safety Board notes that the grounding of the Freyja occurred at a time when “an individual’s strongest sleep drive generally occurs” and the fatigue experienced at this time is “exacerbated when a person is sleep-deprived.”

In other words, it’s a perfect time to fall asleep. In fact, between 2014 and 2019, 10 of the 14 marine accidents the NTSB investigated where fatigue was a contributing factor occurred between 1 and 6 am.

It’s hard to say how accidents like this can be prevented because a lot of the commercial fisheries are built around the kind of work schedule experienced by the Freyja’s crew.

One thing is for certain; you don’t want to join the membership list of what I’m calling commercial fishing’s Sleeping-Crash Club, not with membership dues of a ruined boat, injuries or death. So, get some sleep.