Published last April, The Blue Revolution - Hunting, Harvesting, and Farming Seafood in the Information Age, dedicates 272 pages to tell the story of a long and worrisome problem for the world’s oceans, with few answers: overfishing.

In his new book the author reveals how while other industries have embraced technology, using anything from artificial intelligence to drones to become more efficient, “commercial fishing, one of the oldest industries in the world, is a stark exception. Industrial fishing, with factory ships and deep-sea trawlers that land thousands of tons of fish at a time, are still the dominant hunting mode in much of the world.”

There is hope, though, according to the author. Nicholas P. Sullivan writes that “many of the global fish stocks are at a dangerous tipping point, some spiraling toward extinction. But as older fishing fleets retire and new technologies develop, a better, more sustainable way to farm this popular protein has emerged to profoundly shift the balance.”

The Blue Revolution tells the story of the recent transformation of commercial fishing: an encouraging change from maximizing volume through unrestrained wild hunting to maximizing value through controlled harvesting and farming. Entrepreneurs applying newer, smarter technologies are modernizing fisheries in unprecedented ways. In many parts of the world, the seafood on our plates is increasingly the product of smart decisions about ecosystems, waste, efficiency, transparency, and quality. 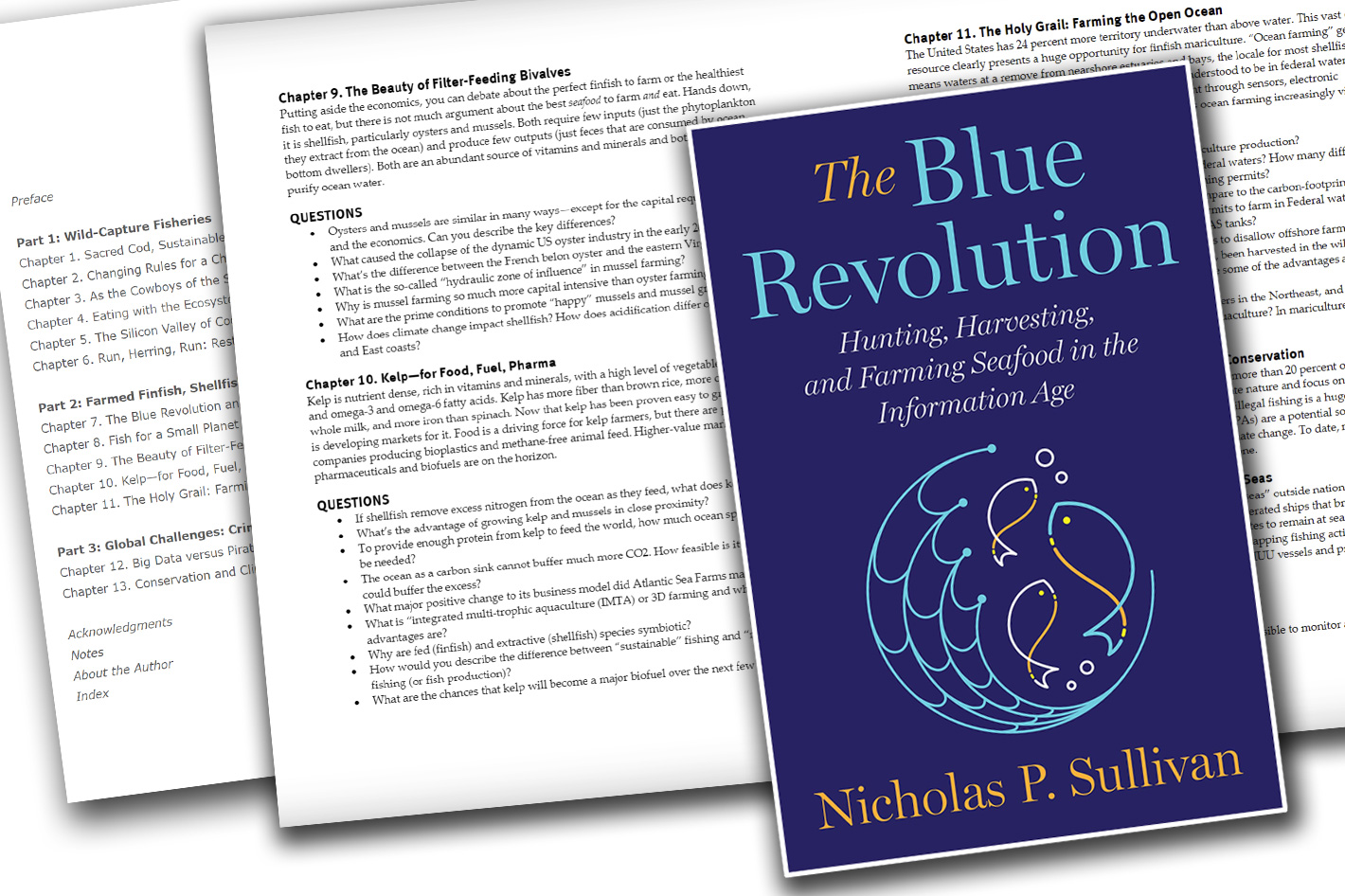 From New Bedford to the Gulf of Mexico

Changes in behavior, technology and policy are occurring throughout the fishing industry. The author points two good examples from the United States, but more can be found in the book:

Sullivan presents this new way of thinking about fish, food, and oceans by profiling the people and policies transforming an aging industry into one that is “post-industrial”—fueled by “sea-foodies” and locavores interested in sustainable, traceable, quality seafood. Catch quotas can work when local fishers feel they have a stake in the outcome; shellfish farming requires zero inputs and restores nearshore ecosystems; new markets are developing for kelp products, as well as unloved and “underutilized” fish species.

In the book Sullivan shows how the practices of thirty years ago that perpetuated an overfishing crisis are rapidly changing. In the book’s final chapters, Sullivan discusses the global challenges to preserving healthy oceans, including conservation mechanisms, the impact of climate change, and unregulated and criminal fishing in international waters.

Nicholas P. Sullivan is a writer and editor focusing on the impact of business and technology on international development. The Blue Revolution is his fourth book. Sullivan is currently a Senior Fellow at The Fletcher School’s Council on Emerging Market Enterprises and a Senior Research Fellow at its Maritime Studies Program. Sullivan has twice been a Rockefeller Foundation Bellagio Center Resident Fellow. A graduate of Harvard University and The Fletcher School of Law and Diplomacy, he lives in Dartmouth, Massachusetts.