Sky-high lobster prices over the past several months appear to have abated, both at the shore and in the market.

The price has dropped steeply enough that it's garnered wider media attention, with reports saying the price of lobster has suffered its largest drop in years. The Fish, Food & Allied Workers Union in Newfoundland and Labrador, Canada reported the average market price went from USD $10.50 per pound in mid-April to $8.22 in late May.

However, the price dips are nothing new, Cozy Harbor Co-Founder and President John Norton told SeafoodSource.

“I’ve been seeing stories about the price has dropped in half, and it’s in freefall, and I think that’s an inaccurate representation of what’s going on with boat price here in Maine, for example, and to a certain extent Canada as well,” Norton said.

Portland, Maine-based Cozy Harbor specializes in fresh and frozen lobster tails, and Norton has been in the lobster processing business since 1993 – and the industry itself for longer than that. The latest price shift, he said, is a “normal adjustment.”

The price of lobster has fallen significantly, but that was coming off of a period of record-high prices on the back of relatively low inventory, Norton said. Prices over the winter were some of the highest he’d seen in a decade, for a combination of reasons.

First, the inventory of lobster stored over the winter was low, Norton said.

“The second factor is, we had very blowy weather all the way from January into early May, so there was very little new caught lobster coming in because the boats weren’t fishing,” Norton said.

That combination resulted in extremely high prices, “as high as $13 a pound,” but high prices in winter are nothing new.

“The price always goes high in the winter, because the availability is fairly low,” Norton said.

Even without the normal increases in winter, record-breaking prices had become the norm in 2021. Sky-high demand coming off the back of the COVID-19 pandemic, coupled with the supply of lobster, were the reasons for it, Maine Lobster Dealers' Association Executive Director Annie Tselikis told SeafoodSource at the time.

The high prices drove the fishery to a record value as well – the fishery in the U.S. state of Maine alone hit $730 million in value in 2021 – shattering the previous record.

As a result, the price dropping to a normal level during its routine spring adjustment meant a larger dip than usual.

“The pricing adjustments that we’ve seen in the last two months are completely normal, with the exception that the starting price was much higher than it is normally,” he said.

While the pricing adjustments are normal, parts of the situation that the lobster industry finds itself in at the moment are not.

According to Norton, a large part of the current change in lobster prices is partially a collateral effect from the pricing adjustment that recently hit snow crab in Canada.

Prior to the current season, snow crab pricing was hitting record levels.

“Prices that retailers and foodservice distributors were buying at started at $11.50 or $12 a pound at the beginning of the season, and it got up to $16.50 at the high point,” Norton said. 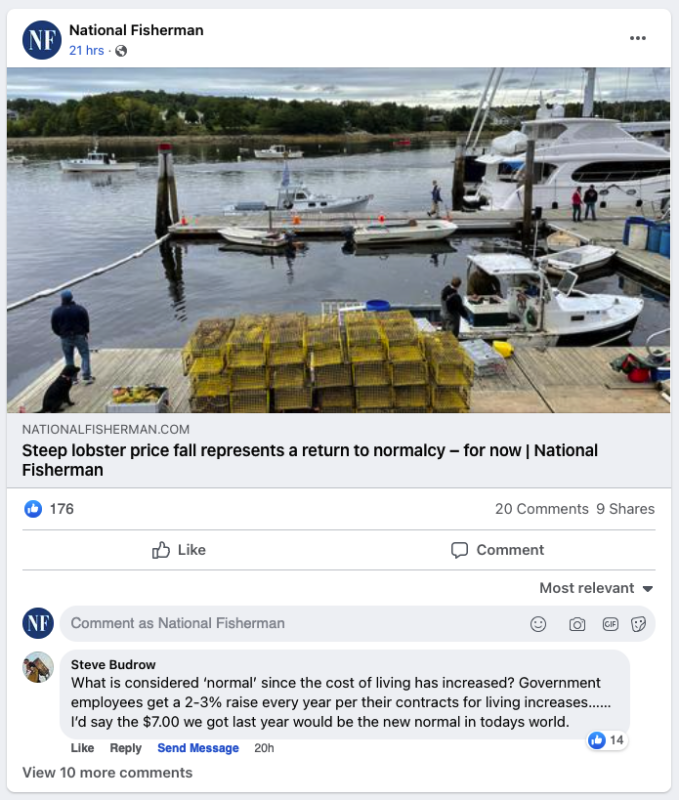 Typically, $11.50 is a high point for the species, so when the price started out at that it was already above normal.

“When it rolls up to $16.50, everybody was in disbelief at how high that is,” Norton said.

That price was high enough that fishermen in Newfoundland and Labrador Canada were pushing to receive $9.05 Canadian ($7.21 U.S.), per pound at the boat at the start of this year’s snow crab season.

That hope for a high price quickly faded as prices began to fall, decreasing to the point that the Association of Seafood Processors in Canada put out a release saying the snow crab market was “not functioning in a normal manner” and that production might end up being restricted.

That huge price drop in snow crab, Norton said, is having ripple effects for lobster, particularly for the market for frozen lobster.

“Buyers – and we’ve been told this by some major supermarket buyers and others – say that everybody sees what’s happening in snow crab and thinks it’s happening in lobster,” Norton said. “They’re waiting for the low point to step in and buy, and they think it’s going to fall at the same rate as snow crab did.”

That assumption, Norton said, may have consequences down the road due to the differences in the two species.

Currently, part of what is driving a drop in snow crab prices is an oversupply – Canada increased the quota for the species significantly, with many processors sitting on large inventories.

The same is not the case for lobster, Norton said.

“The difference is the lobster processors saw what happened in snow crab, and we’ve seen a significant reduction in what’s going through the processing plants,” Norton said.

What that means is, once buyers think the bottom of the lobster market is nigh and begin buying product, the supply of lobsters won’t be there. The lobster industry is typically divided between the live and the frozen market, with whichever product form that has more demand getting more of the lobster.

“So when they decide to step in, and this usually happens in the fall, there’s not enough to satisfy the market, and the price skyrockets. I’ve seen that happen three or four times in my career,” Norton said.

“So far, to a certain extent, we’ve got something relatively new in the frozen industry that wasn’t a big factor five years ago. And that is the private equity money that has come into this industry and the financial capacity of companies to hold inventory,” Norton said.

Smaller companies without the access to capital would, in the past, often be forced to dump product just to get cash in. Now, however, large sections of the lobster industry can be bankrolled by companies worth much more.

“They’re looking at longer term and realizing at some point here the market sentiment is going to change, and they’re going to be in a good position once that happens,” Norton said.

This story first appeared on SeafoodSource.com and is republished here with permission.

Chris Chase is the Portland, Maine-based associate editor of SeafoodSource. Previously, he worked covering local issues at the Coastal Journal in Bath, Maine, where he won multiple awards from the Maine Press Association for his news coverage and food reviews. Chris is a graduate of the University of Maine, and got his start in writing by serving as a reporter and later the State Editor of The Maine Campus, an award-winning campus newspaper.

Alaska pollock on a wild ride