Boston Globe journalist threatens Maine filmmaker with $1 million lawsuit over whale video. Filmmaker Andrew Joyce released a YouTube video, “Weaponizing the Right Whale,” on April 25, in defense of the Maine lobster industry. Boston Globe journalist David Abel, the maker of the 2020 film, “Entangled,” which identifies Maine lobster gear as a major threat to the endangered North Atlantic right whale, is threatening to sue Joyce for copyright infringement over Joyce’s use of clips from Abel’s film. 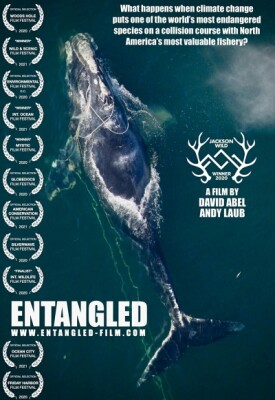 In 2020, noting that many whales bear scars of entanglement, Abel made the case that Maine lobster gear, particularly the vertical buoy lines used to haul traps and trawls, “lobster lines,” as Abel calls them, pose a dire threat to the endangered North Atlantic right whales, whose numbers have dwindled to an estimated 366.

In his video, Joyce, scion of a Maine lobster fishing family, utilizes the voices of people in the Maine lobster industry and clips from Abel’s film to refute the claim that Maine lobster gear is killing right whales.

“I used a clip from Entangled that showed an entangled whale while people talked about how much damage was being done by lobster gear, I added text that this whale was actually entangled in Canadian snow crab gear,” says Joyce. “Things like that that I believe fall under the fair use rules that govern the use of copyrighted material.”

“If all Maine lobster gear was taken out of the water, how many whales would it have saved?” he asks. “Exactly zero.”

The Boston Globe’s Abel has demanded that Joyce take down the video.

Joyce says he has no intention of taking down Weaponizing the Right Whale, so it remains up to Abel to decide if he will proceed.

Who We Are: Andrew and Jason Joyce

Who We Are: Andrew and Jason Joyce