Lars Vinjerud II can’t stop growing his fisheries and seafood business. “I’m lucky,” he says. “I’ve got a lot of good people working for me.”

Vinjerud’s company Fleet Fisheries in New Bedford, Mass., has 14 boats in the scallop, lobster and longline fisheries, and branches in the seafood marketing, a machine shop and more boats scheduled for construction. “Ya just keep rolling,” he says.

Vinjerud’s newest contribution to the New Bedford waterfront is the Viking Power, a vessel that is definitely outside the box. The Viking Power is 106 feet long, has a beam of 30 feet and draws around 14 feet, and catches the eye immediately because of its unique bow shape, which slants down forward into the water.

“I’ve been drawing this boat for 20 years,” says Vinjerud. “I took the design to Williams Fabrication [in Bayou La Batre, Ala.] and we took it to a company called C. Fly Marine. And they modeled it going 6 or 8 knots in 15-foot seas.” According to Vinjerud, the bow cuts through waves and reduces the motion of the vessel, giving the crew a safer more comfortable work platform.

“I call it the positive energy bow,” says Vinjerud. “Like how in judo you use the other person’s energy in your favor.” 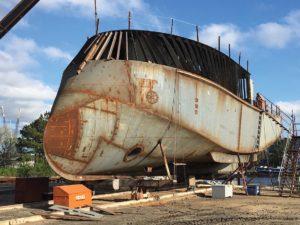 The Viking Power has a V-12 Mitsubishi Marine engine set up at 1,100 horsepower. “I got the Mitsubishi because it’s Tier IV and mechanical. I don’t want an engine with a lot of computers in it that can mess things up.”

Besides its hull design, another obvious innovation on the Viking Power is that the vessel sets and hauls its dredges using A-frames instead of traditional booms. “We’ve eliminated a lot of the steps for bringing the dredge aboard, so it’s safer, and a guy can keep cutting until the dredge is on deck.”

With booms, the hook-up person on a scallop boat has to jump like a monkey, hooking the dredge in different configurations to get it landed on deck, dumped, and back on the rail, often having to hop on the dredge in rough weather and ride it sliding around on deck. The Viking Power’s heavy steel A-frames are set fore and aft and flop out over either side of the boat, the towing wires run out through blocks on the frames, giving the 14-foot dredges more spread. When it’s time to bring the gear aboard the dredges are hauled up to the blocks on the A-frames, and then hydraulic rams pivot the frames up, lifting the gear over the rail in a simple procedure.

Back in the day, scallop boats typically sailed with 11 people: two watches of four crew on deck — 6 hours on, 6 hours off — with a captain, mate, and cook or engineer. Vinjerud’s boats are limited to crews of seven in the open areas, and crews of eight when given quota in closed areas. But the Viking Power has 17 bunks between five staterooms. “We might be able to do something with permits in the future,” says Vinjerud, hinting at the possibility of bigger crews. “Then this boat would really be something different. The way it is now she’s just another scallop boat.” Not quite.

“Everyone remembers exactly where they were that day. I was building a winch foundation when Lars arrived at our yard. We were talking about boats when we heard the news of the attacks on the World Trade Center. Lars went home wondering whether it was a good time to build a boat. He called me up a couple of weeks later and said, ‘Let’s build that boat.’ Since then I’ve built 11 boats for him, including scallop boats, longline boats and lobster boats.”

The Viking Power started with Vinjerud asking Williams to design a scallop boat with the X-Bow. Lane Williams’ father, Dale, took on the challenge and did the initial design work. “My dad is old school,” Williams says. “He still designs everything with pencil and paper on a drafting board. He then hands it over to me and I put that into CAD and loft every piece from there.”

According to Williams, C. Fly Marine, in Mandeville, La., provided engineering support after the initial hull design had been completed.

“Another innovative feature Lars wanted was A-frame booms for towing and handling the dredges,” says Williams. They were a challenge, he notes, because they were added after the boat was well under construction.

“Building boats with Lars is a privilege,” Williams says. “Because he wants to do things different than anyone else and that challenges us to be our best.” Vinjerud is proud of his boats and Williams is too. Besides the A-frames, the deck equipment includes two Pullmaster H30 winches for hauling the dredge, Pullmaster H12s for dumping the bags, and Pullmaster PL-5s for the outriggers. “Lars also wanted a 12,000-pound hydraulic deck crane for unloading the catch,” says Williams. “Another advancement was in using electric over hydraulic controls for all the boat’s hydraulics.”

Product handling on the Viking Power is also customized for efficiency. “Once the scallops are shucked, they put them into a sorter/washer, where they drop below deck into vats that we built custom chill plates and baskets for,” says Williams. “At the end of a watch, the crew will box the scallops and place them on stainless steel racks in the 30-foot by 18-foot freezer hold.” According to Williams, fresh scallops will be held in a 30-foot by 14-foot ice hold.

Below deck, the Viking Power’s V-12 Mitsubishi turns a ZF 5350, 5.5:1 reduction gear and a 6-inch diameter Aquamet 17 stainless steel shaft, with a 79-inch diameter, 72-inch pitch, four-blade Kaplan-style wheel inside and 80-inch nozzle. Two 150-kW John Deere 6068 gensets provide electricity for the vessels and the refrigeration, and another JD 6068 drives the hydraulics.

While Williams’ 17-person crew keeps almost all the work on the boat in-house, he contracts out the refrigeration, electronics, upholstery and insulation.

R.S. Price & Son of Fairhope, Ala., did the refrigeration work, and E&R Marine provided the electronics. “We put on eight remote monitors,” says E&R Marine owner Jody Esfeller. “It’s got cameras looking at the dredges and looking forward for when the captain’s at the aft station.

The Viking Power’s wheelhouse is equipped with a suite of Simrad electronics, including an NSS evo3 16-inch, and three NSS evo3 12-inch monitors, a Halo 4 radar, a BB 4G dome radar, and an HS 60 sat compass for use with computers, autopilot, and rudder indicators.

“The wheelhouse is set up with a console set back from the front windows,” says Williams. “So you can step up and see everything out the window. And there’s an aft station with all the electronics and hydraulic controls, including an electronic over hydraulic joystick steering.” A Lorex nine-camera CCTV system enables the captain to keep an eye on the entire vessel, even from his stateroom via the boat’s onboard WiFi system.

Vinjerud’s innovations don’t stop at the job of getting product to market. The Viking Power has an oil separator to prevent oil from going overboard and a recycling system for all the trash generated onboard. Whether other scallop boat owners copy Vinjerud’s ideas remains to be seen.

“I think they’re watching me for now,” says Vinjerud. “I’m the guinea pig.”

Get the full specs and layout in National Fisherman's January issue.