NOAA is now seeking input on the draft on ropeless roadmap to help protect the North Atlantic right whales.

According to NOAA Fisheries, “endangered North Atlantic right whales are approaching extinction. The latest preliminary estimate indicates there are fewer than 350 individuals remaining and less than 100 breeding females. Primary threats to the species are entanglement in fishing gear and vessel strikes.

"Climate change is also affecting every aspect of their survival—changing their ocean habitat, their migratory patterns, the location and availability of their prey, and even their risk of becoming entangled in fishing gear or struck by vessels.”

The proposed changes announced by NOAA Fisheries will introduce, as National Fisherman reported, new vessel speed regulations to further protect North Atlantic right whales from death and serious injuries resulting from collisions — part of a multifaceted approach to stabilize and recover this endangered population. The changes would expand the current mandatory seasonal speed restrictions of 10 knots or less and broaden the spatial boundaries and timing of the seasonal speed restriction areas along the East Coast of the United States, incorporating most vessels measuring 35 to 65 feet in length. 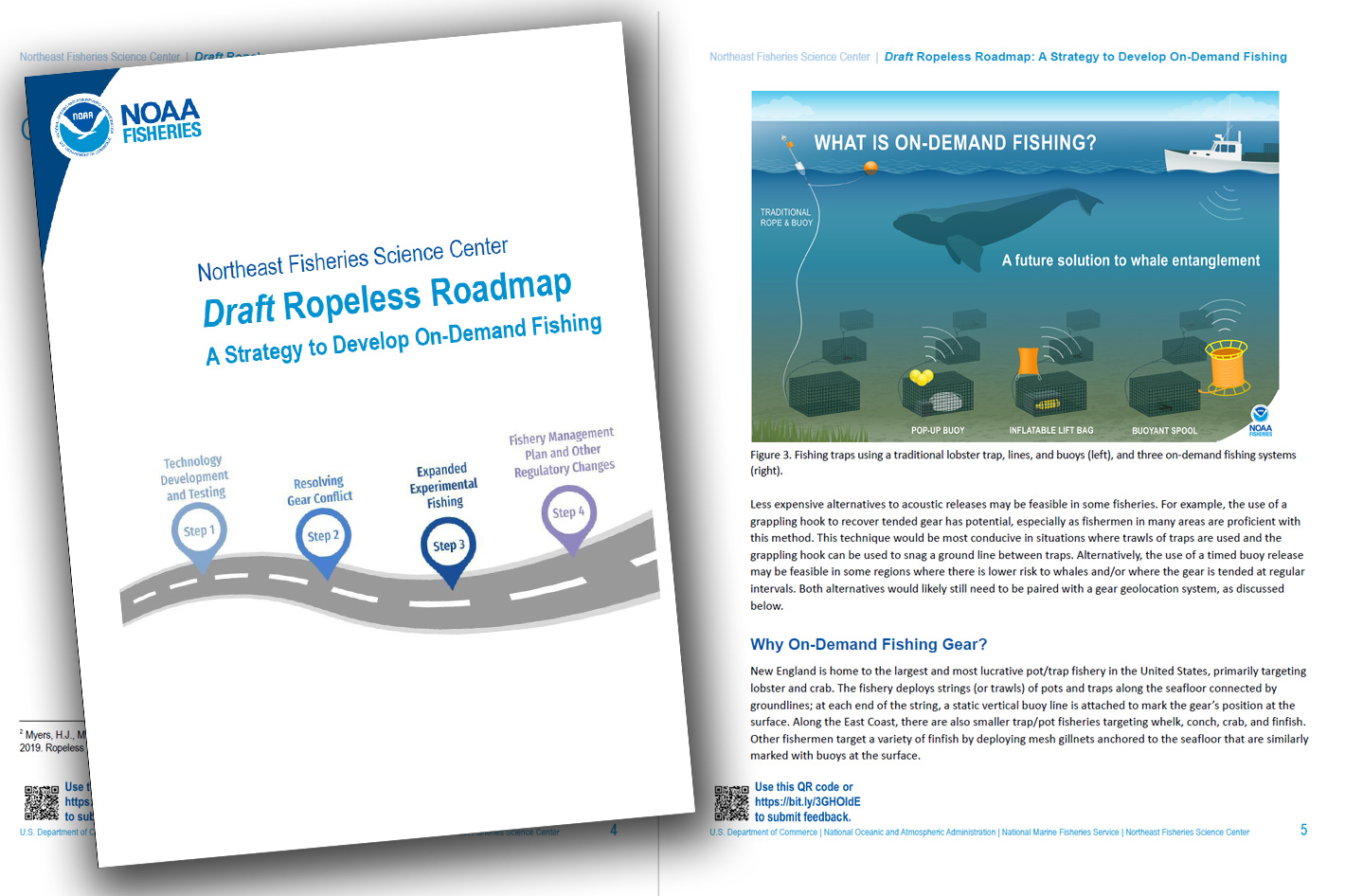 In addition, the agency is releasing a draft “roadmap” for public comment about on-demand, or “ropeless” fishing gear, which outlines possible ways to increase the use of this technology in commercial fisheries off the East Coast of the United States. The draft roadmap – under the title Ropeless Roadmap: A Strategy to Develop On-Demand Fishing - leverages lessons from fisheries using on-demand gear that are emerging around the world.

Entanglement in fishing gear is one of the greatest threats to North Atlantic right whales. NOAA Fisheries and its partners estimate that over 85 percent of right whales have been entangled in fishing gear at least once. Fishing gear can cut into a whale’s body, cause serious injuries, and result in infections and mortality.

Even if gear is shed or removed through disentanglement efforts, the time spent entangled can severely stress a whale, weaken it, prevent it from feeding, and sap the energy it needs to swim, feed, and reproduce. Chronic entanglements are one reason scientists think that female right whales are having fewer calves and are taking longer to have calves.

“These two efforts are part of our North Atlantic Right Whale Road to Recovery, a strategy that encapsulates all of our ongoing work across the agency and in collaboration with our partners and stakeholders to conserve and rebuild the North Atlantic right whale population,” said Janet Coit, assistant administrator for NOAA Fisheries and acting assistant secretary of commerce for oceans and atmosphere at NOAA. “Despite the many challenges we face, including climate change, we must find solutions to mitigate the threats to marine mammals while supporting the livelihoods and economies of our fishing communities who put healthy food on our tables.” 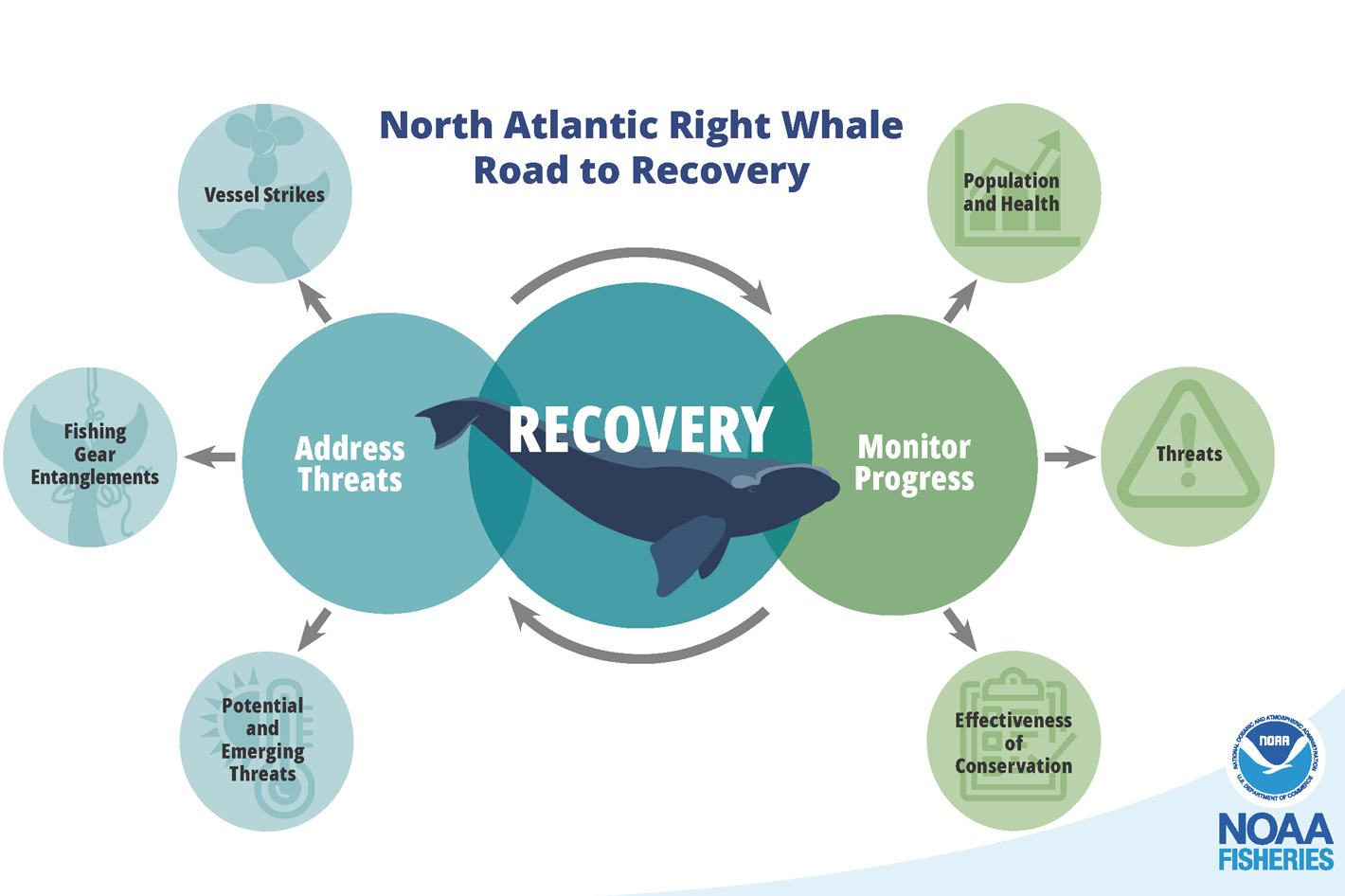 For decades, vessel strikes and entanglements in fishing gear have been the two primary causes of right whale injury and death. Researchers found that between 2003 and 2018, in cases where a cause of death could be determined, all juvenile and adult right whale deaths were attributable to human activities. Beyond the first year of life, right whales are not living long enough to die of natural causes. Scientists declared an “Unusual Mortality Event” for North Atlantic right whales in 2017, which is defined as a significant die-off of a marine mammal population, requiring immediate response. In just the last two and a half years, at least four vessel strikes have killed or seriously injured North Atlantic right whales in U.S. waters.

NOAA Fisheries’ efforts are visible in the North Atlantic Right Whale Road to Recovery, which is built on the foundation of the statutory requirements that NOAA Fisheries is charged with implementing under the Endangered Species Act and the Marine Mammal Protection Act. The strategy complements the North Atlantic right whale 2021–2025 Priority Action Plan by identifying NOAA’s goals and related objectives, and by tracking and communicating progress on major activities and associated milestones. The Road to Recovery webpage is a living information resource that is being updated regularly.

The draft “ropeless roadmap” identifies the status and remaining research and technology needs for on-demand fishing gear, and includes considerations of the economic, safety, operational, regulatory and enforcement challenges and opportunities related to implementing on-demand fishing. On-demand systems provide an alternative to seasonal fishery closures that are used to substantially reduce the risk of marine animal entanglement in fixed gear trap/pot fisheries. These fisheries typically use rope to connect surface buoys to gear on the ocean floor so it can be retrieved. 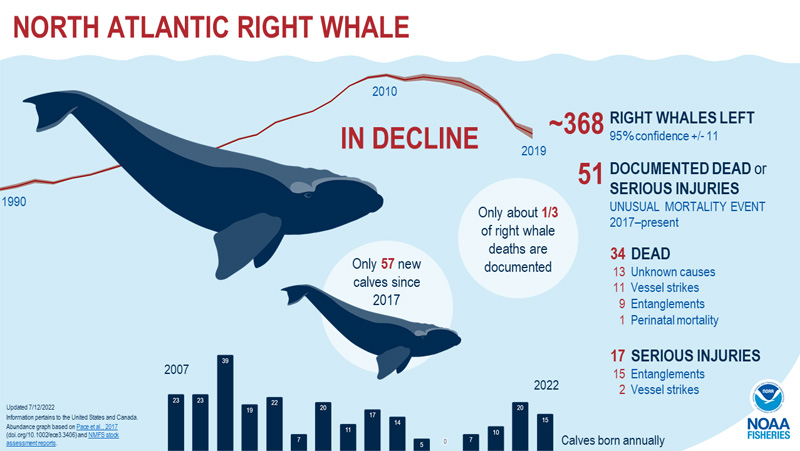 NOAA Fisheries says that both of these efforts, are part of the organization’s North Atlantic Right Whale Road to Recovery, a strategy that encapsulates all of its ongoing work across the agency and in collaboration with its partners, dedicated to conserving and rebuilding the North Atlantic right whale population through a variety of innovative techniques to study, protect, and recover these endangered whales.

The organization recognizes that “that there are many partners who are key to this process and strategy, particularly state fishery managers. Because this technology is still in development, public input is invaluable. Presentation of the roadmap at meetings of the Atlantic Large Whale Take Reduction Team, New England Fishery Management Council and Atlantic States Marine Fisheries Commission will provide a venue for input.”

NOAA Fisheries ends stating that “we will work to carry on a dialogue and use the feedback to guide our on-demand program moving forward. You may provide feedback using our form.”