With an Oct. 21 deadline for public comment, fishing and environmental groups are pushing for NMFS approval of Amendment 8 to the New England Fishery Management Council’s herring plan.

If approved by the agency, Amendment 8 would prohibit the use of midwater trawl gear inshore of the 12-mile territorial sea limit, from the Maine-Canada border south to the border of Rhode Island and Connecticut. Off eastern Cape Cod, the restricted area would bump out to 20 miles, within 30-minute squares 114 and 99. 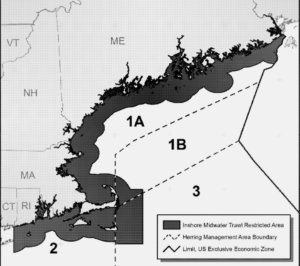 John Pappalardo, CEO of the Cape Cod Commercial Fishermen’s Alliance that pushed hard for the changes, said the future impact is uncertain.

“The first and most obvious thing is what we won’t see: the lights of midwater trawlers, factory boats working in pairs, wiping out schools of forage fish like herring close to shore,” Pappalardo wrote in the association’s Sept. 25 newsletter.

“What we hope to see next is more subtle: the return of those schools, and then all the bigger fish that feast on plentiful herring like cod, haddock, pollock, striped bass, bluefin tuna, even some species of whale,” Pappalardo wrote.

That area restriction will come on top of the existing seasonal closure of Area 1A in the inshore Gulf of Maine. Herring trawlers and buyers – including the lobster industry that has seen its traditional bait supply shrink – are expecting another hit.

“The information in the document clearly indicates it’s 30 percent of revenue. It’s going to have a significant effect,” said Mary Beth Tooley, who represents the O’Hara Corp., a major fishing and bait supply company in Rockland, Maine.

The company operates two vessels in the herring fishery and supplies a significant amount of bait for the lobster industry. The Maine Lobstermen’s Association, whose membership has long watched escalating bait prices come with herring quota reductions, had likewise pushed for less severe restrictions.

A longtime industry representative on herring management, Tooley said Amendment 8 “in current form will have significant impacts,” while the impact of trawlers on localized fish abundance has been overstated.

“On top of that we’ve had a series of low recruitment events” that contribute to pressure on the quota process and how people perceive the issue, she said. On the other hand, summer 2019 saw lot of menhaden caught in the Gulf of Maine, so pogies were plentiful even as the herring quota was reduced.

“Everything you could have predicted about the bait market this summer was wrong,” said Tooley.

In documents published in the Federal Register, the New England council contends its amendment as proposed will turn “short-term negative economic impacts” on herring and lobster fishermen into long-term benefits, by reducing variable yields and the probability of future overfishing and shutdowns.

The inshore midwater trawl restricted area will “minimize local depletion and user group conflict” when those waters are being used by other commercial and recreational fisheries and ecotourism, like the whale watching fleet, the council says.

“Information to quantify the impact of midwater trawling on other user groups is scarce, so the amendment analyzed the degree of overlap between midwater trawl vessels and other user groups,” according to the document. That effort looked specifically at predator fisheries throughout the year and tuna fishing and ecotourism in Area 1A during the fall months.

The council passed Amendment 8 in September 2018, submitting the measure to NMFS for agency officials to decide whether to approve, disapprove or partially approve its provisions. At this point the agency is collecting public comment on the proposal, a regulatory step called a notice of availability.

NMFS still must publish another rule proposal with the actual Amendment 8 regulations, explained Janice Plante, a public affairs officer for the council. Then there will be a second comment period when those actual regulations to implement Amendment 8 are published, she said.

“We aren’t going to see our nearshore immediately return to the fertility we knew in the 1990s, when huge shoals of herring coursed through, filling the water column from bottom to top. The fish have taken too hard a hit to come back that fast,” Pappalardo wrote. The next step should be to close offshore areas to fishing during spawning, he says: “Areas of Nantucket Shoals as well as farther out, the northeast peak of Georges Bank, should be closed during spawning times.” 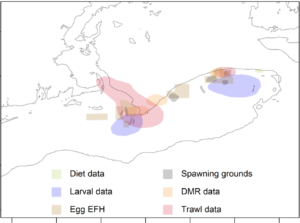 Meanwhile the council has begun preparing for that step, developing possible ways to protect spawning herring offshore on Georges Bank. The Gulf of Maine Research Institute was engaged under contract to review all available scientific research and previous management actions and pull in other data sources.

All that was overlaid to help the council reach a consensus on the most important likely locations and times of spawning. According to the council, those findings indicate “that most spawning activity takes place in two locations along the northern edge of Georges Bank – one in the west (Nantucket Shoals/Great South Channel) and one in the east (Northern Flank). Spawning occurred primarily in the months of September and October.”