In early April, Judge James Boasberg of the Federal District Court for Washington, D.C., ruled that NMFS violated the ESA in permitting the lobster fishery. The judge’s opinion states that “Congress enacted the ESA in 1973 to halt and reverse the trend toward species extinction, whatever the cost.”

“The MLA has launched a campaign to raise $500,000 to save Maine’s lobster industry,” McCarron said. The MLA is an intervenor in the court case and is the only organization in Maine that has been granted standing to participate in the case.

Whale entanglement data collected by NMFS show that no right whale deaths or serious injuries have ever been documented in Maine lobster gear. This is in stark contrast to the death of 10 right whales in Canada last year. 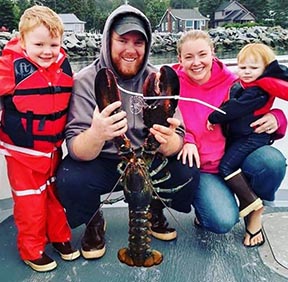 “Maine lobstermen have not broken any laws. For nearly a quarter of a century they have followed every law and fishery management regulation, including major changes to their gear and fishing practices to save right whales,” said McCarron. Nevertheless, the court's decision will directly affect Maine lobstermen and the communities that depend on them.

“This case could lead to closure of the world’s most sustainable fishery, and we cannot let that happen. Right whales are not dying in Maine lobster gear,” McCarron continued. “Lobstermen have done everything they have been asked to protect right whales and remain committed to doing their part to save the species.”

Another federal ruling at the end of the April requires Massachusetts officials to obtain a permit from NMFS to license vertical buoy lines, gear that is vital to the fishery. Cape Cod bay's seasonal closure from February to May is designed to protect migrating right whales as they move north to Canadian waters.

Richard “Max” Strahan, a longtime whale advocate, filed the case against state regulators in Massachusetts. Strahan has filed a similar lawsuit in federal court in Maine.

“Right whale entanglements now have to come to an end,” Strahan said, according to the Boston Globe. “Lobstermen won’t be able to use vertical buoy ropes. If they don’t adapt, their industry is going bye-bye.”

“The Massachusetts Lobstermen’s Association is reviewing carefully the court’s summary judgment ruling on liability," said Beth Casoni, the association's executive director. The Massachusetts association "expects to submit briefing to the court during the remedy phase of this proceeding to protect the rights and livelihood of the lobstermen it represents.”

An adverse decision would have a ripple effect on the thousands of businesses and communities that depend on lobstermen.

“This is an urgent situation for Maine’s lobster fishing families and also for everyone in Maine who values our cultural heritage and the economic impact tourism brings to the state,” noted Amy Lent, executive director of the Maine Maritime Museum.

“This could mean the end of the lobstering tradition for our children,” said McCarron. “We are fighting for our lives right now, and we are prepared to appeal if it comes to that,” she said.

The association is organizing donations through the Legal Defense Fund. Contributions may be made on the MLA website, via phone at 207-967-4555, or by mailing checks made out to MLA Legal Defense Fund and mailed to MLA, 2 Storer St., Suite 203, Kennebunk, ME 04043.