The federal government's 2021 annual report on the state of U.S. fisheries portrays progress in managing the nation's marine resources – even with the massive wallop, the seafood industry took with the covid-19 pandemic.

The National Oceanic and Atmospheric Administration and its National Marine Fisheries Service released the annual summary on May 12, updating the status of 460 fish species in U.S. waters.

“NOAA’s annual Status of Stocks report shows that the United States continues to be a global leader in sustainable fisheries management, as we work to understand how climate change is affecting fisheries and the communities that this sector supports,” said NOA Administrator Rick Spinrad. “The report demonstrates that we remain on track to maximize marine fishing opportunities while ensuring long-term ecological and economic sustainability in our changing world.”

Updated stock assessments and other metrics show improvement "in the face of climate change" and the economic value of fisheries "remain strong" at $4.8 billion in 2020 with 8.4 billion pounds landed, said Janet Coit, NOAA's assistant administrator for fisheries, in a May 12 conference call with news reporters.

The agency calculates that covid-19 depressed values and landings by 10 percent to 15 percent, a result that was in line with expectations, said Coit. Seafood consumption among U.S. consumers dipped to 19 pounds annually per capita from 19.3 pounds, she said. NMFS officials say storms including hurricane Ida's strike on the Gulf of Mexico coast also had a big impact.

The long-term challenge of climate change is already being felt, said Coit.

Now NOAA is on board with the Biden administration's push to expand offshore wind energy development. The agency is deeply enmeshed with the federal Bureau of Ocean Energy Management in trying to move toward the administration's goal of 30 gigawatts of offshore wind power potential by 2030 while managing potential conflicts with fishing, endangered species, and other maritime industries.

"The path forward for the U.S. includes responsibly working to decarbonize our energy supply, and to promote renewable energy while looking out for marine resources," said Coit.

The 2021 report brought no big surprises. It features a first-ever assessment of the Atlantic blacktip shark, with a determination by NMFS that the stock is not subject to overfishing, not overfished, and is above the sustainable level.

One major fishery on the downside is Bering Sea snow crab, with catches that have declined by more than 50 percent over two years. Predation by cod and a shifting stock are thought to be factors, said Kelly Denit, director of the agency's Office of Sustainable Fisheries.

Another is the continuing, years-long bad news of Atlantic cod, with catches reaching a low point of 1.6 million pounds in 2020, according to the report. The cod quota is so low that much of the remaining New England dragger fleet avoids the species for other groundfish.

"At this point, we can't separate all the causes. There were a lot of factors," much of it decreases in an effort, said Liddell.

NMFS officials point to 47 fish stocks being rebuilt since 2000, with 90 percent not subject to overfishing. The agency noted overfished stocks increased slightly from 49 to 51. Conversely, the environmental group Oceana sees the annual report as a glass half empty.

“It’s disappointing to — once again — see the lack of progress to rebuild our nation’s struggling fisheries,” said Gib Brogan, fisheries campaign director at Oceana. The group pointed to slippage in managing the Gulf of Mexico and South Atlantic gag grouper, which now declined after being seen as a success story a few years ago. 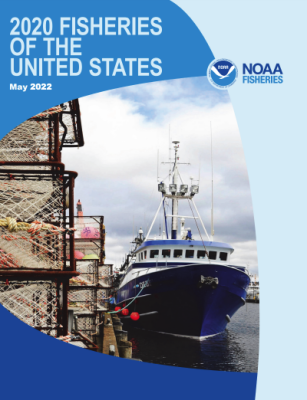 Download the Fisheries of the United States 2020 report HERE