Oceana released a new analysis today finding that the United States’ requirements for transparency of fishing vessels fall short of other countries’ requirements, including the European Union. Oceana says this analysis reinforces the need for the U.S. government to expand regulations and require more fishing vessels to use public tracking devices.

Originally developed to increase maritime safety, reduce vessel collisions, and enhance awareness of vessel locations at sea, the automatic identification system (AIS) has become an invaluable tool for monitoring fishing vessel activity at sea… but it must be used to work. The problem, according to Oceana’s analysis, is that only 12% of the more than 19,000 commercial fishing vessels registered in the U.S. fleet are required to carry AIS devices. 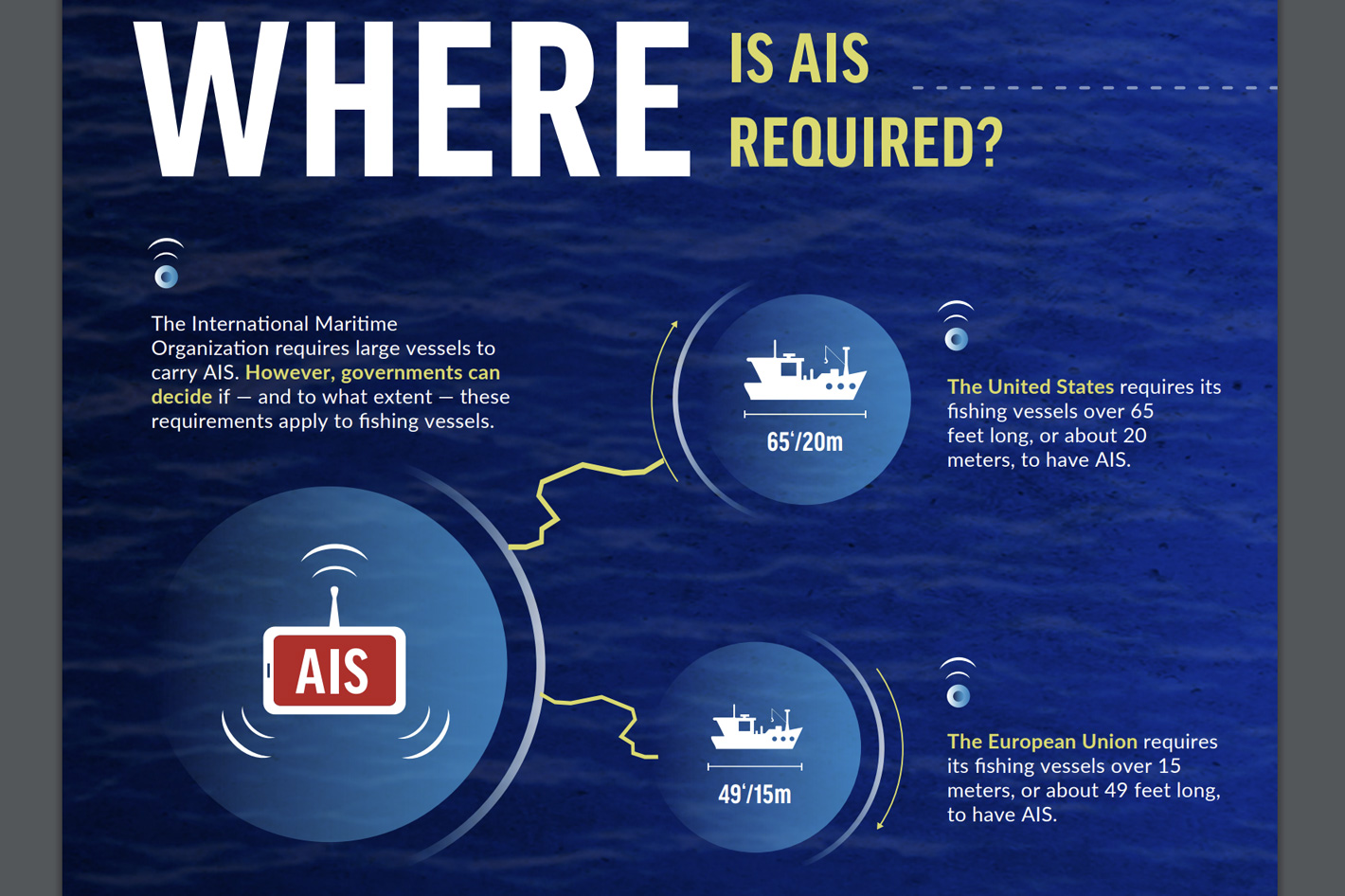 According to the report, “the United States requires fishing vessels 65 feet or longer to carry AIS devices and transmit signals within 12 nautical miles from the coast. In contrast, the European Union requires all fishing vessels over 49 feet (15 meters) to continually broadcast their AIS signals for their entire trip. While the length requirement differs by only 16 feet, expanding the requirement in the United States would increase AIS usage by 65%, covering more than 1,500 additional fishing vessels.”

The mandatory tracking does not differ just in larger vessels. The report notes that “the European Union, the United Kingdom, Liberia, and smaller fishing nations like Mauritius also require smaller fishing vessels — compared to U.S. requirements — to carry and transmit AIS devices. Indonesia requires all vessels, both domestic and foreign flagged, to use AIS devices in Indonesian waters. “

The automatic identification system (AIS) broadcast of a vessel’s location, speed, direction, and other identifying information is the key to that vessel’s transparency, as it, provides key details that, when analyzed, can demonstrate when a vessel is fishing and infer what type of fishing it is engaged in. Because AIS is an inexpensive, easy-to-implement technology, Oceana says it should be required on more U.S. fishing vessels and the United States should require similar transparency of seafood imports. Expanding transparency will help bring to light suspicious behaviors, protect our ocean habitats and wildlife, and discourage illicit activity like illegal fishing and human rights abuses.

85% of the fish consumed in the U.S. is imported

A nationwide poll released by Oceana in January 2021 reveals that Americans overwhelmingly support policies to end illegal fishing and seafood fraud. Included among the key findings, 81% of voters say they support policies that prevent seafood from being sold in the U.S. that was caught using human trafficking and slave labor. Based on that information, Oceana notes that as up to 85% of the fish consumed in the U.S. is imported, “expanding these domestic requirements is necessary to hold imported seafood to higher standards.”

The results reveal that 83% of voters agree that all seafood should be traceable from the fishing boat to the dinner plate, and 77% support requirements for all fishing vessels to be publicly trackable. The findings, the report continues, “show widespread bipartisan support for policies aimed at increasing transparency and seafood traceability to ensure that all seafood is safe, legally caught, responsibly sourced, and honestly labeled.”

The organization adds that “when vessels are required to transmit tracking data, the public and fisheries managers can keep a better eye on what is happening at sea. This allows officials to more effectively focus their enforcement and inspection actions on higher-risk vessels like those that disable their tracking systems or appear to be fishing in closed areas. According to a report by the International Trade Commission, the United States imported an estimated $2.4 billion worth of seafood derived from illegal, unreported, and unregulated (IUU) fishing in 2019 alone. Requiring fishing vessels to continuously broadcast AIS would result in more transparency in vessel behavior and could be used to validate information reported on the origin of the catch.”