Redefining 'Minority' with Imani Black of Minorities in Aquaculture

In just two years of founding Minorities in Aquaculture, Imani Black has amassed over $52,000 for programs, formed a women-led board of directors, and gained one hundred twenty members and counting. On a recent call during her lunch break, we chatted about MIA's growth since our first interview in the fall of 2020.

"It's really kind of settling into what MIA is about," Black says. "I think the more I learn, the more I see where MIA can fill roles (in aquaculture). It's shaping to be something I didn't even know it could be."

The hustle is real but pays off by inspiring minorities into water careers worldwide. "I think the beauty about our members is that they're from all over, on different journeys, and in different parts of their careers," Black said. "The common thread is that they've been wanting and needing a network, like Minorities in Aquaculture, who consistently advocates for them and provides a community they feel connected to. It truly means a lot to them, which ultimately means a lot to me."

In celebration of how one woman's idea can reshape an industry, I'm sharing an exclusive interview with Black from the archives of meganwaldrep.com – including an updated answer on her definition of "minority" and what it means for the community to come.

Let's start with the basics. Which do you prefer – Black or African-American?

I don't have a preference, but probably African American.

Q: Cool. Thanks for that. You said you didn't realize your family's deep roots in fishing and aquaculture until you got older and showed interest in marine biology. Can you please elaborate?

A: Yeah, it wasn't until I was in high school that my mom really got into our genealogy. That's when she knew that I was bringing it back full circle.

The 1800s. That's from the information that I've picked through. My mom has continued to research here and there, but as far as I know, the 1800s. They were just full-fledged watermen who worked on the water full-time.

If we could talk about enslaved watermen on the East Coast and the South, what are your thoughts, and how does this relate to MIA.?

I think keeping that history at the forefront is important because many people don't know it. Especially for people of color, it's more of a representation thing. I use Minorities in Aquaculture for educational purposes. I also use it to show young minority women that we've been a part of this for a while and are not being introduced to something new. It's like giving a history of where our families came from.

To clarify, Minorities in Aquaculture is targeted at women and minorities or minority women? *

Women are just so powerful, intelligent, creative, and skilled in so many different ways that I wanted to target specifically the people – women – that aren't in the history books. With MIA, even though it only targets women of color, I want to use partnerships, mentorships, and internships to highlight as many women in aquaculture as possible, regardless of their race or background.

In the beginning, I had a lot of time to think about what I wanted it to be. It started from wanting to connect with other women of color in the marine science space and aquaculture industry. But it shifted to something so much more. I'm excited to expand the definition of Minorities in Aquaculture and what it means to us. 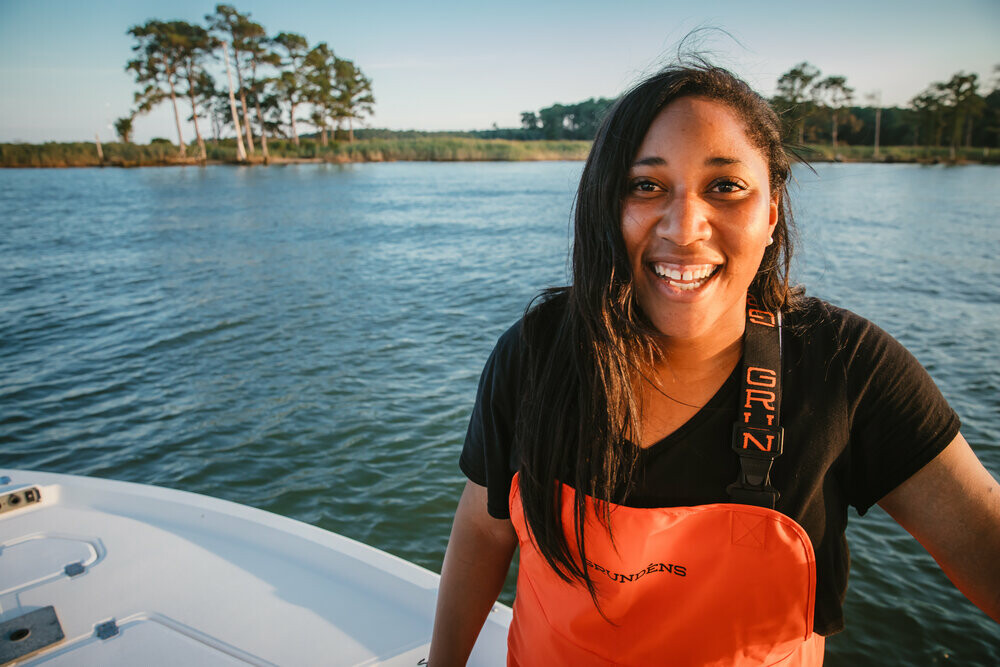 When did you start MIA, and what has been the community response?

The community has been another overwhelming aspect of it. I didn't start Minorities in Aquaculture to be this huge thing. I started it when I was unemployed; I just lost my job in May of 2020, and I was devastated because I felt like it was my dream job. So, I just did it because I saw a need and just wanted to try. And the support I've gotten within the community and other environmental organizations have had for it makes me more aspirational.

For example, I'm starting my graduate program at the University of Maryland's Center for Environmental Science at Horn Point Laboratory in Cambridge, MD. Since January 2020, I've been a Faculty Research Assistant and now transitioning over to a full-time student. My professors have said, Don't stop because you're in grad school. We want to support you. So, they are helping me get through the first couple of years of being a non-profit. It's like a pinch-me moment at times because I never expected any of this.

Like Admiral Vince Leggett & Captain Lamont Wright, some of my idols on the Chesapeake Bay. They are two really historical African-American men who are very vocal about their support, and I never dreamed that anybody like that would even know my name. To have a conversation with them and to hear they're proud of what I'm doing and think that MIA will change a lot of lives, and that's all that I need to hear. It keeps me pushing forward.

What do you know of the partners of watermen in your family?

Though my family has a huge legacy of being on the water, it skipped a few generations before it came back to me. So I haven't had a POCF or another waterman in my lifetime. But my grandmother worked at the packing houses and the shucking houses, and I've gotten the verbal history of it, like my grandmother's stories about the ladies singing church hymns while they were shucking oysters and picking crabs. And she can still pick craps faster than anybody in my family!

What's a memory of eating seafood as a child?

It's so funny because when I had my first crab, I was hooked. My mom, aunt, and grandmother were picking crabs, and I pulled on my mom's pant leg, saying that I wanted more. We're not like a huge family, but my grandmother is kind of the glue and the backbone of many of our recipes, like oyster fritters. Eating seafood is a time to really connect with her. We sit around and talk and pick crabs and catch up with each other.

My favorite way of eating seafood is catching it myself, you know? But my favorite way is steamed crab with spices and oysters on the half-shell. Also, my grandma makes oyster fritters.

Sounds fantastic, but could you please describe the difference between a fried oyster and an oyster fritter?

A fritter is like a pancake. The oysters are chopped into little pieces, then put into the batter, and cooked like pancakes instead of being battered and fried. Cook the batter until the outside's really crispy and the inside is really soft.

Yum! Do you eat it plain or with a sauce?

What do you hope someone will take away from MIA?

I want to create a  network to show women of color that is something you can do. You can take success into your own hands, step into that path, and it's not only going to be great for you but also for the community and aquaculture.

Learn more, donate, or become a partner with MIA at www.mianpo.org and on Instagram at @mia_npo.

Megan Waldrep is a writer based in Ojai, California, and Wilmington, N.C. Her husband, Chris Dabney, is a second-generation California spiny lobsterman and Bristol Bay fisherman, which gives Megan plenty to dish about on her lifestyle blog for partners of commercial fishermen at meganwaldrep.com.

FUBUKI gets fishermen to consider something new when choosing their boots

What does the present and future of XTRATUF look like as part of Rocky Brands?