As recounted in the National Transportation Safety Board’s marine accident brief, issued one year after the sinking, on Sept. 17, 2019, the 65-foot shrimp boat (built in 1973 as the Miss Laurie and later named the Nguyen LV) was shrimping in the Gulf of Mexico on the afternoon of Sept. 17.

A refrigeration problem forced the skipper of the Capt. M&M to stop fishing and head into Sabine Pass for repairs. After leaving the grounds, the captain was at the wheel for 13 hours before a deckhand relieved him with orders to call him just before reaching the Sabine Pass jetties. This is when the problems started.

The deckhand said he had “many years of experience in the industry,” but this was only his second day on the Capt. M&M. The primary navigating machine was a P-Sea WindPlot electronic charting system that operated on a laptop computer. It had to be reset every hour; otherwise, the Capt. M&M disappeared from the screen. 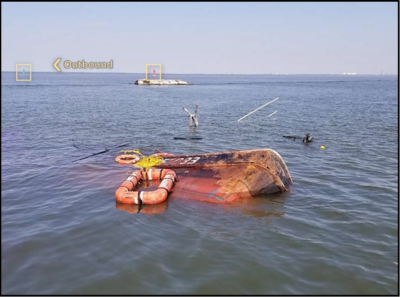 The starboard quarter of the Capt. M&M wreckage. The jetty's channel buoys 19 (green) and 20 (red) are highlighted in the NTSB report. U.S. Coast Guard photo (Click to enlarge.)

Unfortunately, the deckhand wasn’t familiar with the P-Sea WindPlot, and the captain reportedly neglected to explain how to reset it. Thus, two hours later, as the Capt. M&M approached the jetties, the deckhand had no idea of the boat’s position relative to the jetties.

There were, however, buoys with flashing green and red lights and the East Jetty Light, which would have been visible to port to indicate the jetty’s position.

This brings up another possibility, which is alluded to in the accident brief:  “It is also possible that the deckhand fell asleep while on watch.” In any case, the NTSB determined the cause of the accident was the “failure of the wheelhouse watchstander to keep a proper navigation watch.”

The impact from grounding out against the jetty punched a hole in the forepeak below the waterline. Water quickly flooded the forepeak and the engine room though a hole that had been cut in the collision bulkhead separating the two compartments. The hole allowed the crew to pass from one compartment to the other.

Incoming water was quickly chest deep, and it wasn’t long before the Capt. M&M rolled to starboard, and the captain and three crewmen climbed up the deck, over the bulwark and onto the bottom of the hull, where they were rescued.

Watertight subdivisions are not required for a boat the size and age of the 45-year-old Capt. M&M, and it is beyond the scope of a dockside exam. However, the NTSB did note that modifying the watertight collision bulkhead contributed to the sinking, as it allowed progressive flooding.

It added what would seem to be a common sense observation: “Cutting holes in these bulkheads for ease of access to adjacent spaces defeats the designed intent of the bulkhead.”