Texas opens its waters to shrimp trawling on July 15

The fishery closed May 15, 2022, as part of the annual plan. The waters off Texas are closed to shrimp fishing annually to allow brown shrimp to reach a larger and more valuable size prior to harvest, and to prevent waste of brown shrimp that might otherwise be discarded because of their small size.

Shrimp represents the most important fishery in Texas, and it accounts for both 85% of landings and overall economic value of the Texas commercial fishing industry. The fishery is composed mainly of three species: brown (Farfantepenaeus aztecus), white (Litopenaeus setiferus), and pink (Farfantepenaeus duorarum), from which brown and white shrimp are the most common, with brown shrimp landings in Texas accounting for 49% of the total harvest in the Gulf of Mexico, according to the Audubon Nature Institute.

Last year, NOAA Fisheries announcement of closure was made on May 15 (2021), corresponding to the time Texas closes its state waters to shrimp trawling. The Texas closure ranges from 45 to 60 days, but due to Texas regulations only allowing a 60-day closure, the opening date was on July 15, 2021. This year, again, after two months, federal waters from 9 to 200 nautical miles off Texas will open to shrimp trawling beginning 30 minutes after official sunset, local time, on July 15, 2022. 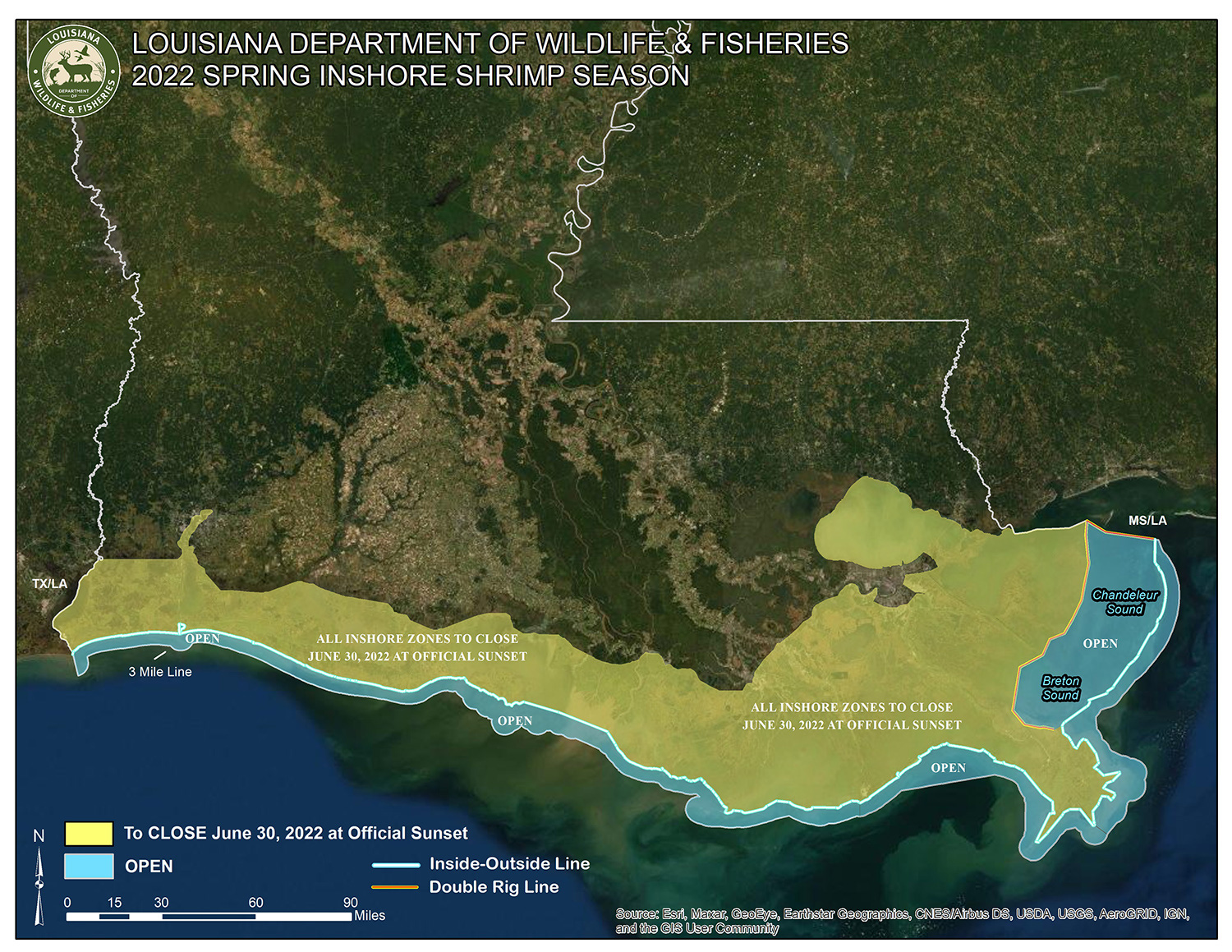 The closing date is based on catch rates of brown shrimp collected with seine gear by the Coastal Fisheries Division of the Texas Parks and Wildlife Department, mean length of shrimp collected in April, percent of samples containing shrimp, and periods of maximum nocturnal ebb tidal flow. According to NOAA Fisheries, the re-opening date for Texas waters is based on the results of biological sampling by the Texas Parks and Wildlife Department and assessment of maximum tidal durations.

Texas is not the only area where shrimp fisheries go through this process. The Louisiana Department of Wildlife and Fisheries announced by the end of June that 2022 Spring inshore shrimp season would close at official sunset on Thursday, June 30, 2022, in all state inside waters from the Mississippi/Louisiana state line westward to the Louisiana/Texas state line.

The line generally follows the coastline from the Louisiana/Texas state line to the Louisiana/Mississippi state line. Waters landward of the shrimp line are inside waters; waters seaward of the shrimp line out to the three mile line are outside waters. Inside waters are further divided into seven major estuarine basins. The Louisiana Legislature, Wildlife and Fisheries Commission, and LDWF are responsible for managing the shrimp fishery in inside and outside waters. The Gulf of Mexico Fishery Management Council and NOAA Fisheries are responsible for the shrimp fishery in federal waters. 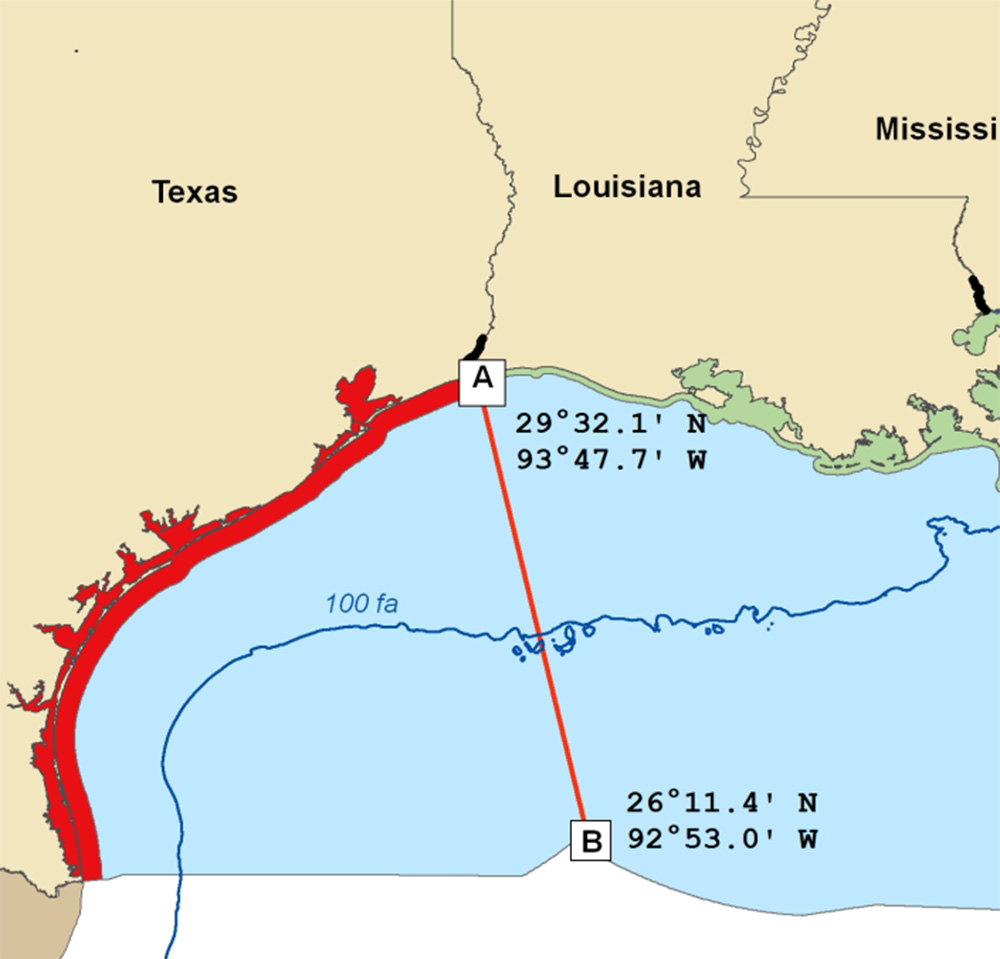 Harvesters of shrimp in the Gulf

According to the Louisiana Department of Wildlife and Fisheries “data collected in recent weeks by LDWF biologists indicate an increased quantity of small, juvenile white shrimp within these waters. The decision to close inside waters was made to protect these developing shrimp and provide an opportunity for growth to larger and more marketable sizes. The areas that remain open will be monitored and closed if biologically appropriate.”

White and brown shrimp support the most valuable and the second largest commercial fishery in Louisiana. Louisiana is the top harvester of shrimp in the Gulf and the United States. Louisiana’s state waters are divided by the shrimp line into inside and outside waters for management purposes. The Louisiana Wildlife and Fisheries Commissions sets seasons for these waters based on recommendations from LDWF's biologists who actively monitor shrimp populations and environmental conditions in Louisiana's waters as well as input from the industry through the Louisiana Shrimp Task Force.

Most of the shrimp harvested in the U.S., (60%) comes from the Gulf of Mexico, especially Texas and Louisiana. In 2020, landings of brown shrimp totaled 67 million pounds and were valued at more than $151 million, according to the NOAA Fisheries commercial fishing landings database.