OMAO’s research and survey ships comprise the largest fleet of federal research ships in the Nation. Ranging from large oceanographic research vessels capable of exploring the world’s deepest ocean, to smaller ships responsible for charting the shallow bays and inlets of the United States, the fleet supports a wide range of marine activities including fisheries research, nautical charting, and ocean and climate studies.

A huge part of the fleet is used to support fisheries. One example is the Gordon Gunter, a vessel used to collect fisheries data by stern trawling, longlining, and the deployment of plankton nets and other types of gear. Named after Gordon Gunter, whose career as a marine biologist and leader in marine research and education spanned over 60 years.

Homeported in Pascagoula, Mississippi, NOAA Ship Gordon Gunter is a multipurpose oceanographic research vessel that monitors the health and abundance of fisheries resources and marine mammals. The ship primarily serves the National Marine Fisheries Service (NOAA Fisheries) and operates mainly in the waters of the Gulf of Mexico, Atlantic Ocean and Caribbean Sea.

Named after Henry Bryant Bigelow (1879-1967), a visionary oceanographer, zoologist and marine biologist whose work helped establish oceanography as a scientific discipline, the NOAA Ship Henry B. Bigelow is a state-of-the-art fisheries survey vessel that studies a wide range of marine life and ocean conditions along the U.S. East Coast. The ship's primary mission is to study and monitor fish stocks. The ship, homeported in Newport, Rhode Island, also conducts habitat assessments and surveys marine mammal and seabird populations. 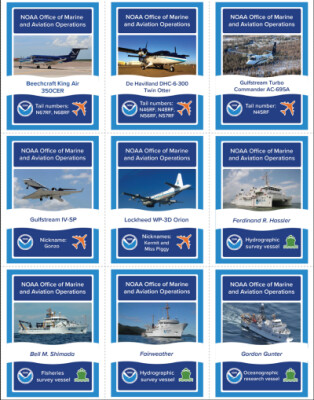 NOAA published a series of virtual trading cards that can be used to show teens and all those interested its fleet of ships and planes. The collection which includes the 15 research and survey ships and nine aircraft is a valuable tool to promote NOAA’s work and mission. Get to know NOAA’s ships and planes with these virtual trading cards, which are available in a .pdf document that can be downloaded and printed at home.

To better understand NOAA's Office of Marine and Aviation Operations (OMAO) mission and future plans, download the OMAO Strategic Plan 2021-2025, a .pdf document that reveals a framework for measurable, incremental progress towards our long-term objectives while meeting short-term needs.