One of the world's first marine protected areas dating back to 1984, the Ocullina Coral Reef was about to be opened to rock shrimp trawling. But National Marine Fisheries Service has rejected that option over potential damage to the reef ecosystem.

The South Atlantic Fishery Management Council proposed Amendment 10 to its coral and reefs management plan. It came as a surprise to conservation groups, as it suggested the opening part of the Oculina Coral Reef, a 90-mile strip of reefs off the central east coast of Florida, to fishing activities.

In 1984 the council designated part of the Oculina Bank as protected habitat, prohibiting use of bottom trawls, bottom longlines, dredges, fish traps, and to mitigate the risk of damage by fishing gear to Oculina coral.

Information on shrimp fishing effort in the area and its economic value to the rock shrimp portion of the shrimp fishery was discussed by the council very late in the development of the 2014 amendment, Coral Amendment 8. Rock shrimp fishermen had then requested adjustment of the area boundary, and provided coordinates of the important fishing grounds in that area.

The Amendment 10 proposal was developed by the council to explore options to establish some options for establishing a shrimp fishery access area in the northern extension. The other impetus came from the Trump administration, in the form of the May 2020 Presidential Executive Order on Seafood Competitiveness and Economic Growth.

“Coral Amendment 10 would address the recommendation to reduce burdens on domestic fishing and to increase production within sustainable fisheries contained,” according to the proposal. “This would be accomplished by re-opening a closed area to commercial fishermen who have lost access to areas that have been traditionally fished.”

This would allow rock shrimp fishermen to bottom trawl for rock shrimp in a 22-square mile area where the gear has been prohibited since 2014. As a result, the first marine protected area in the world to protect a deep-water coral reef would suffer from damage, the agency concluded.

“After the public comment period, the NOAA (Fisheries) rejected Amendment 10, preventing the opening of a unique ecosystem to rock shrimp trawling," the group said in a release after the agency's decision. "This came as a result of the thousands of signatures and comments submitted urging the NOAA to save and protect the Oculina coral reef, unique among coral reefs and exists nowhere else in the world.”

The South Atlantic Fishery Management Council's vote to open the area to commercial rock shrimp fishing drew strong opposition over concerns  it would hurt an ecosystem that is an important habitat providing spawning and nursery services for young fish, including commercially important grouper and snapper, which represent one of the most valuable fisheries in the State of Florida.

The proposal is still not completely off the table however. The South Atlantic Council is expected to discuss a revised proposal at its September meeting in Charleston, S.C.

The Oculina ecosystem is “home” for a variety of fish including scamp grouper, gag grouper, snowy grouper, speckled hind, and red snapper. 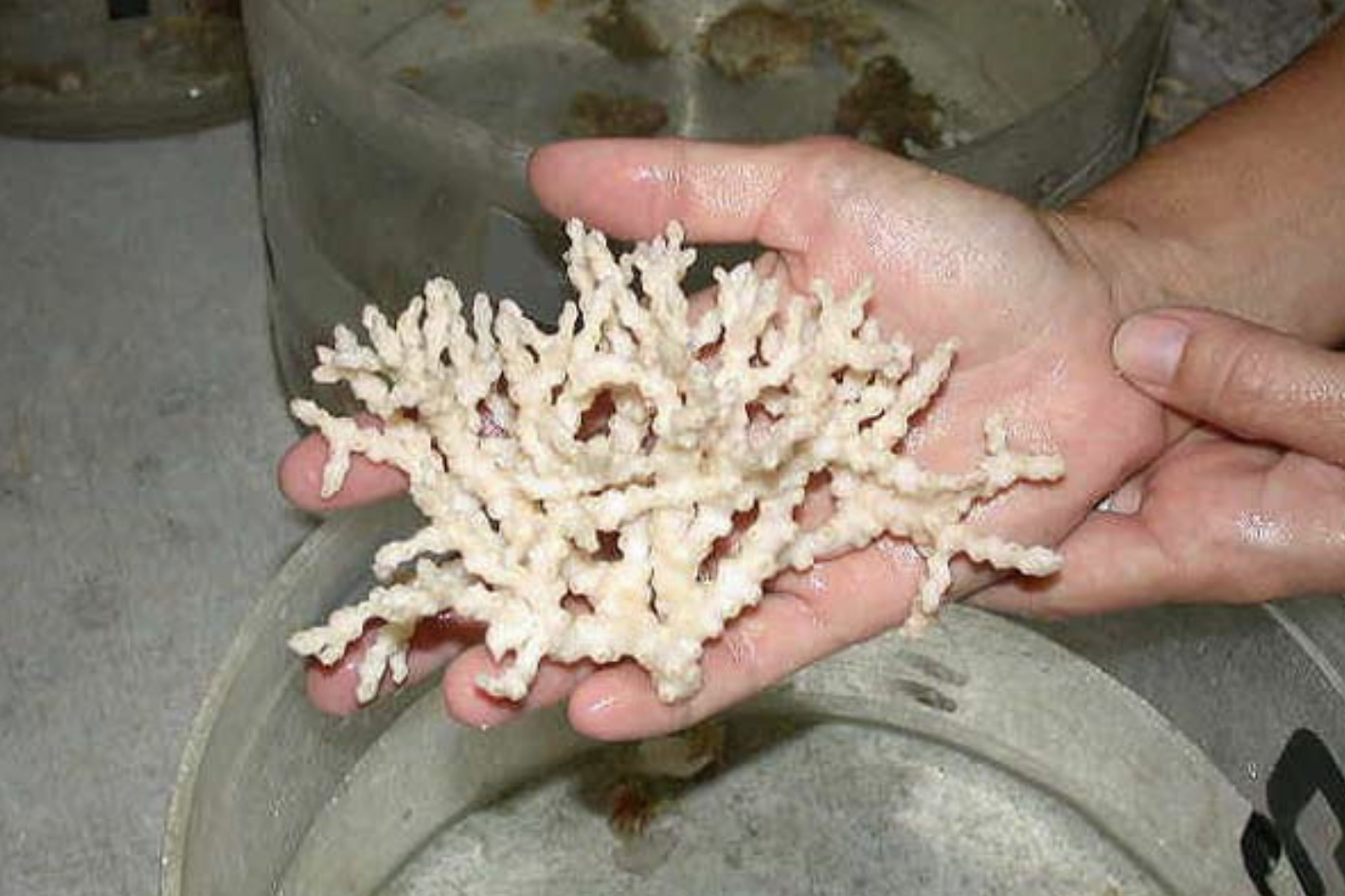 The coral reef was first discovered in 1975

Besides the commercial interest of the fish nursery area, the Oculina Bank, named after the slow-growing ivory tree coral, Oculina varicosa, is a unique coral reef ecosystem that was first protected in 1984 and designated as the Oculina Bank Habitat Area of Particular Concern (HAPC).

The urge to protect the area predates that, as the Oculina Coral Reef was first discovered in 1975. At the time scientists requested that the coral reef be protected from the developing roller rig trawl fishery, as well as fish pot and longline fisheries. The original section was 23 nautical miles long and 4 nautical miles wide (92 square nautical miles) and located about 15 miles off the coast of Fort Pierce, Fla. 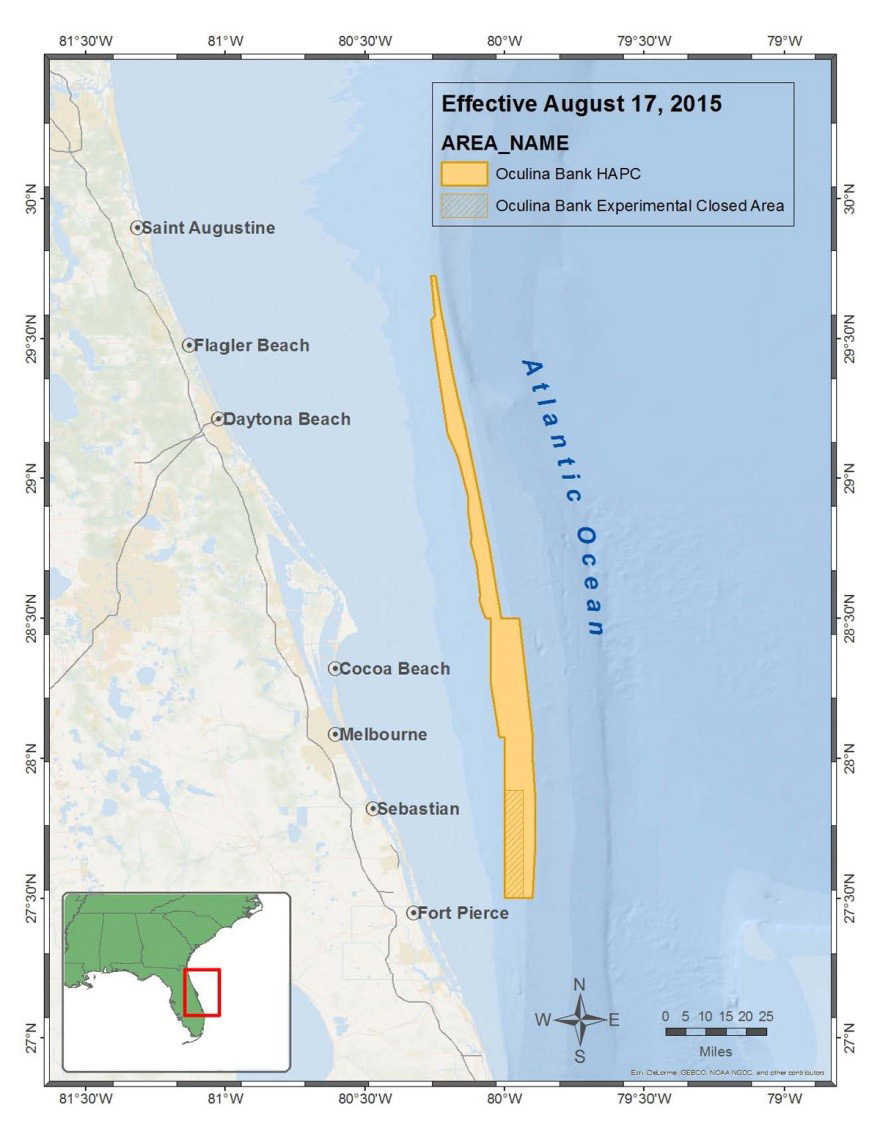 Upon the discovery of additional Oculina coral mounds, the area was expanded in 2000 and again in 2015, as the result of different research trips into the area. The Oculina Bank HAPC is now over 130 nautical miles long, stretching from Fort Pierce northward to almost St. Augustine, Florida. Bottom-tending fishing gear (which includes trawling, fish traps, and dredging) and anchoring are prohibited in the area.

The Oculina Bank supports diverse communities of finfish and invertebrates, and consequently have been designated as essential habitat for many species of fish. Damaged in World War II during antisubmarine operations to destroy German U-boats, fishing impacts, and episodic die-offs, the important ecosystem is now protected in federal waters of the U.S. South Atlantic Bight.

As biologist Chip Collier, from the South Atlantic Fishery Management Council, wrote on NOAA’s Ocean Exploration website, “the Oculina Bank HAPC and the Oculina Experimental Closed Area are rich in biological diversity and cultural history. The regulatory measures that are currently in place should aid in the protection of these important and fragile Oculina corals, as well as the myriad of species that rely on these corals for habitat.”

Deep water Oculina reefs are not known to exist anywhere else in the world except off the Atlantic coast of Florida, so it makes complete sense to protect the area, not just because of the delicate coral ecosystem, but also because the area protects critical habitat for juvenile and spawning groupers, including snowy grouper, speckled hind, gag, and scamp.