A northern right whale calf was injured by a vessel propeller off Georgia, apparently just days after being born, and a massive operation was mobilized to aid the calf and its mother, NOAA officials said.

The injured calf has two roughly parallel, S-shaped that experts say are consistent with propeller injures from a vessel strike sometime on Jan. 8.

“One of the injuries appears to include damage to the calf's mouth which could hamper its ability to nurse and feed,” according to a narrative of the case from NOAA. “Biologists estimate the newborn is just days old and the wounds were perhaps hours old.” 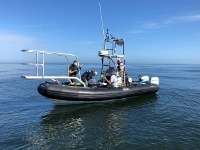 The calf was spotted that same day by biologists with the Florida Fish and Wildlife Conservation Commission, who work with NOAA in tracking the movements of highly endangered right whales on their calving grounds off the Southeast coast.

The calf was born to an approximately 27-year-old mother known to biologists as Derecha – Spanish for “right,” dubbed in keeping with biologists’ practice of identifying and closely tracking individual whales of maternal age. It was one of four calves born in this season, acclaimed by conservationists for adding to a population estimated at only 450 animals.  Derecha herself last gave birth in 2010, according to NOAA.

Lobster and crab fishermen in the U.S. and Canada are under increasing pressure to come up with ways to reduce whale gear entanglements. But ship strikes are a mortal danger, and Canadian authorities have imposed additional restrictions on ships operations in the Gulf of St. Lawrence after whale deaths there.

In the following days biologists and veterinary experts assessed the calf’s injuries and saw them to be worse than originally thought, downgrading the calf’s condition from guarded to poor.

A bigger aid effort was mobilized including Florida and Georgia wildlife agencies, the Clearwater Marine Aquarium, Sea World, the Blue World Research Institute and International Fund for Animal Welfare, and calling on other experts to consult on the injuries.

On Jan. 15 a team again located the mother whale and calf off Ferdinandia Beach, Fla., and an aerial survey crew verified their identity and condition. A veterinarian determined the calf would benefit from antibiotics.

“The team was able to remotely administer the drugs with the hopes of staving off infection,” according to NOAA. “Now biologists will continue to monitor the calf during routine aerial surveys. The calf’s prognosis remains poor.”

The group will continue to track and assess the whales with photo and video imagery, the agency says. Meanwhile it is warning mariners and the public to “give these animals some space” by complying with federal law that forbids approaching closer than 500 yards by air or sea.