Oysters are having a moment, if you haven’t noticed. Even small towns are getting oyster bars, and national demand has skyrocketed.
But down on the Gulf Coast, oystermen (and blue crab fishermen) have spent the last decade struggling to stay afloat in the face of massive freshwater runoff events when the Army Corps of Engineers opens the Bonnet Carré Spillway to spare New Orleans infrastructure from floodwaters.
“The spillway openings had a devastating effect on our fisheries in 2011, 2016, 2018, and two in 2019,” says Ryan Bradley, executive director of Mississippi Commercial Fisheries United and a 2018 NF Highliner. “And the only time disasters were declared was 2011 and now 2019.” 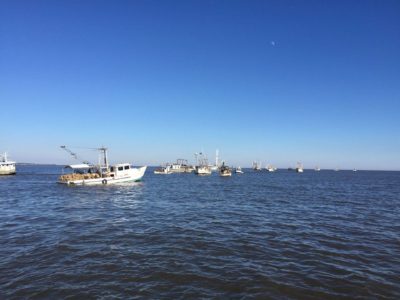 Mississippi oyster fishermen relocated nearly 40,000 sacks of oysters away from freshwater intrusion as a result of the 2016 Bonnet Carré Spillway opening. Fishermen were paid with funds allocated from the 2011 spillway fisheries disaster. MCFU photo

A freshwater spillover shocks nearshore oyster stocks with a sudden and deadly change in salinity. That water quality change also affects young crab. Fisheries advocates were able to win a congressional disaster declaration for the 2011 losses to the oyster and blue crab fisheries.

The state of Mississippi was awarded $11 million for that 2011 declaration, but fishermen have seen very little of those funds so far.
“It was probably about 2015-16 before we started seeing money from that disaster declaration. And they’re still spending that money, almost 10 years later,” Bradley says.
The funds, he adds, have largely been funneled away from fishing communities.
“The Mississippi Department of Marine Resources took 30 percent of it off the top for indirect,” says Bradley. “That’s essentially a flat rate that they take for handling the money. Another major source of the money has gone to scientific study. Our universities have received a big chunk of money to do studies we still haven’t seen.”
Fishermen and seafood dealers saw some relief with programs designed to lay out cultch material, conduct oyster relays — relocating healthy oysters to depleted grounds — and through derelict crab trap cleanup programs, according to Bradley. 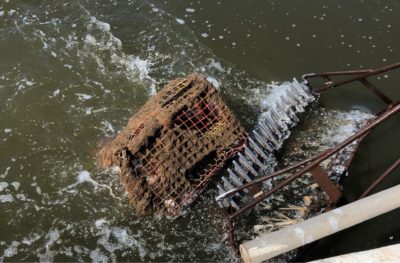 “Oystermen and crab fishermen and seafood dealers have received about 15 percent [of the $11 million in disaster funds]through that work,” says Bradley. “Seafood dealers were the lead contractors for the oyster relays. The government contracted with the seafood dealers, who subcontracted the oystermen. The state required multimillion-dollar insurance coverage, which the fishermen didn’t have, but the dealers did. And those programs worked good. But you only have so much resource you can relay and so many times you can do that.”

Now almost nine years after the 2011 disaster occurred, oystermen could finally be getting their cut of the funds. On Feb. 18, 2020, the Mississippi DMR approved a request to designate $1 million of the disaster funds to distribute as direct payments to the affected oystermen. (Bradley notes that payments are not designated to affected blue crab fishermen.)
“You had to have a commercial license for two years prior to the 2011 disaster, and one year after,” Bradley says. “We have a trip-ticket system in Mississippi, with all guys reporting landings. If they have a license, they may be eligible. But if they didn’t have any landings, they may get weeded out.”
“The last I’d seen, there were 150 oystermen who were eligible during this time. A lot of these guys have gone out of business, some have passed away,” Bradley says. “At the end of the day, at least 100 fishermen are going to be eligible.”
“It may put anywhere from a 6, 7 or 8,000-dollar check into their hands,” Bradley says. “That could go toward annual repairs, boat haulouts and maintenance. They can definitely use those funds.”
Widespread delays in funding disaster declarations have led to the introduction of the federal Fisheries Fund Act, which would simplify and shorten the process to relief.
“It’s a long time for these communities to suffer,” Bradley adds. “It’s been a long road.”
And that road doesn’t seem likely to change.
Two spring 2019 openings of the Bonnet Carré Spillway wreaked havoc on a wide range of fisheries across Mississippi, Louisiana and Alabama, sending fishermen back to the federal government for disaster assistance.
“This 2019 is a catastrophic disaster declaration,” Bradley says. The spills were so large they affected oysters, crab, shrimp and finfish. “In that, we’ve got seafood processors, restaurants, dealers, bait shops, ice houses. Anyone that can prove they have a direct tie to the fishery is going to be included.”
Mississippi requested $215 million in damages, $250 million for Louisiana, and Alabama requested some as well.
That tallies up to more than $500 million total from the three Gulf Coast states.
“I think there’s a lot of pressure in Congress right now to provide relief,” Bradley says.
“We’ve got people asking every day: How are they gonna pay their mortgage, how are they gonna pay their car note, how are they even gonna afford groceries?” Bradley says. “We’re glad that the state is stepping up and at least trying to make things a little bit better.”