“We have everything secured — as much as we could do,” said fisheries writer Susan West on Thursday morning from the Outer Banks village of Buxton, N.C., as Hurricane Florence bore down on the Carolina coast. “We have plywood shutters up on most of our windows. The boat has extra lines on it.”

Her husband, Rob, fishes their 34-foot gillnetter, the Lucy B., which is docked at Jeffery’s Seafood on the sound side of nearby Hatteras Village.

“Most of the folks that we know — the fishermen — all stayed here,” West said. “Hatteras Village is still a thriving commercial fishing center.”

“A very unscientific survey of residents deciding to ride out the storm proved to be commercial fishing families. Reasons for staying inevitably center on being near their boats and equipment. At nearby Oriental, it’s evident that two of the largest commercial fishing operations have made preparations — the docks are lined with trawlers securely tied to the docks.”

She added that the fleet has been busy for days leading up to the storm’s arrival.

“Beginning last week, the commercial industry responded to a call by the N.C. Division of Marine Fisheries to keep a close eye on the progress of Hurricane Florence and to start getting ready for the storm. Fishermen were out in force, many with extra help, to remove fishing gear from waters well before the storm’s arrival. For days, boats crowded with crab pots and gillnets headed to the dock to be stored as securely as possible. All coastal waters in North Carolina are temporarily closed to shellfish harvest until further notice.”

In Buxton, several local businesses have been humming along with the rest of the storm-prepping fishing community — in full swing and riding it out.

“Our local grocery store here in Buxton is still open for business. They will stay open until 6 o’clock as long as conditions don’t deteriorate too bad.” West reported. “They got deliveries yesterday, and they’re well stocked. I was in there yesterday, and they had plenty of milk, plenty of bread. The deli was open. Thank god for our local hardware store. The lumber place in Buxton was open yesterday and advertising that they would deliver plywood.” 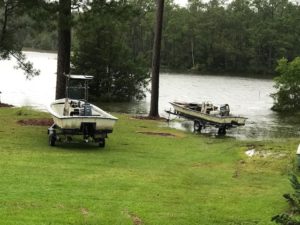 Boats on Buxton Creek in Merritt, N.C., at noon. 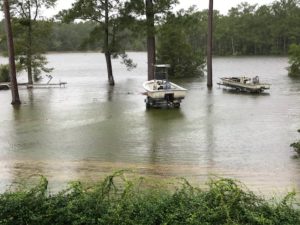 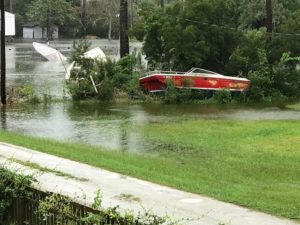 “Everybody helps each other,” West added. “The last couple days down at our boat, the fishermen were conferring how to run the lines. There’s a really strong sense of community here.”

There’s also a well-tested emergency relief plan. According to West, the local power company can run mobile generators for whole villages, rotating days to run temporary power to communities around the island.

“Dare County has a protocol to run emergency ferries to Rodanthe,” she added, which aids in transporting supplies and emergency responders to the barrier islands.

“That’s part of living on Hatteras Island,” West said. “We experience a lot of storms. We’re about as prepared as any community.”

That preparation has filled the days leading up to Florence’s landfall, as the communities watched the Category 4 storm churn at sea and drop to Category 2 just before coming ashore.

“Those of us that chose to stay have worked hard for days to secure fishing equipment, pull boats and prepare our homes as much as possible,” Donald added. “We have cleaned out ground-floor buildings, lifted precious things as high as possible and nailed doors of sheds holding the necessities of fishing for a living shut.”

And now all they can do is wait.

“The water is rushing to cover our property at an amazing rate — looks like about 40 feet in the last hour,” Donald reported at about 1 p.m. on Thursday as she watched her local creek rise. “The worst isn’t expected until late tonight. It’s a scary kind of quiet with only the sounds of possible destruction for company.”

Local high tide was around noontime today and midnight tonight.

“The local weather forecast says to expect winds of about 70 from [Thursday night] until through Saturday,” West said. “South of here is expected to get heavy amounts of rainfall and also inland.”

Then there’s the aftermath to worry about in and around isolated communities.

“Ocean flooding and surge is more of a concern at this point,” West said. “Our biggest concern is the condition of Highway 12 after this is all over and if travel to other villages or off the island will even be possible.”

She remembered destruction of hurricanes past and how they affected the local fleet.

Back in 1999, the flooding from Hurricane Floyd led to “hog farms and lagoons overspilling,” West reported, “a lot of agricultural runoff spilling into Pamlico Sound.”

Through it all, they have weathered the storms, hoping the lines hold fast. Fishermen, she added, are well aware of how a storm affects the sea.

“Sometimes I feel like the reporters on the national news act like the folks who decide to ride it out are idiots. And that doesn’t go over well here.”

Still, the decision to stay or go isn’t easy.

“We didn’t make the decision to stay here lightly. We went through a lot of discussion and monitoring the projected tracks and computer models,” West added. “With a Cat 4 coming straight for the Outer Banks, we’d be out of here.”

“North Carolina’s Outer Banks and Downeast communities usually hunker down for hurricanes, while visitors and newcomers leave quickly. Little is different in the Inner Banks counties, especially those with a significant number of commercial fishermen,” Donald said, leaving room for a lesson learned. “This hurricane may change our minds going forward. That’s if we manage to survive this one.”