Three lanchas – small, slim-hulled outboard boats of 20 to 30 feet that can run at 30 knots – were corralled about 50 miles inside the boundary and detained by crews on a Coast Guard cutter, small boat and helicopters.

The haul brought in 12 miles of longline gear, other fishing equipment illegal under U.S. law, and 2,020 pounds of poached red snapper. 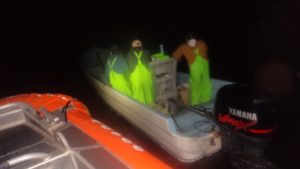 A lancha crew is escorted by Coast Guard law enforcement after they were stopped fishing in federal waters off south Texas. Coast Guard photo.

Mexico suffers from poor fishery management and enforcement, and the better fishing in waters off Texas is an irresistible lure for many fishermen. The recovery of red snapper in U.S. Gulf of Mexico waters has brought the fish back to a relatively consistent market with good prices.

The Coast Guard and Texas state authorities regularly patrol the sea frontier with Mexico against frequent probes by lancha crews.

“The Coast Guard’s continued commitment to protecting wildlife and deterring illegal fishing is highlighted in this case,” said Chief Warrant Officer Homar Barrera, a command duty officer at the Coast Guard’s Corpus Christi air station, in a statement describing the operation. “The teamwork between the command center and assets on scene resulted in the flawless execution of multiple interdictions.”