Scallops on the double

After photographing nearly all of the inshore fisheries on my home waters of the Chesapeake Bay, I wanted to branch out and begin my documentation of fisheries along the Atlantic Coast. I used my connections that I had created with fishermen on the bay to connect with scallopers out of Maryland, New Jersey and Virginia and also a packing house in New Bedford, Massachusetts — the epicenter of the scallop fishery. After laying down the groundwork and doing the research, I was able to make it out on the water.

The story of the scallop fishery sparked my interest, and I knew that it was necessary to document both the day boat and trip boat fishery when covering the Atlantic Coast’s fisheries.

The stories and photographs in this piece reflect my experiences on the water on two scallop boats — a day boat and a trip boat. Both of these boats were targeting the same product using similar gear but were subject to different regulations. To create an all encompassing view of the fishery, it was necessary to cover both types of boats.

The Atlantic sea scallop fishery took off in the 1950s when Norwegian immigrants started dragging in the waters off of New Bedford, Mass. Environmental conditions and lack of management created dramatic supply swings in the fishery until the early 2000s. That’s when the industry collaborated with federal regulators to change data collection and management; the fishery rebounded and was declared fully rebuilt in 2001.

For the last two decades, the fishery has been among the most lucrative in the world, with the Atlantic Coast landings of Placopecten magellanicus valued at more than $500 million. The most recent stock assessment in 2018 revealed that the fishery is not being overfished and is not subject to overfishing. The rebound of the Atlantic scallop and the profitability of the fishery has made it one of the world’s best success stories in fisheries management.

In late August, I connected with Kent Island, Md., waterman David Tedford and his crew of three out of Ocean City to go out on a one-day scalloping trip onboard the 43-foot Chasin’ Rainbows. Tedford began his career on the water in Chesapeake Bay, dredging for soft-shell clams and trotlining for blue crabs.

In 2005, he saw a financial opportunity in bluewater fishing and found the 43' x 14' 6" Chasin’ Rainbows in Canada’s Prince Edward Island. He hauled it to West Ocean City on Sinepuxent Bay and has spent every year since scalloping from April through August and harvesting whelk in the winter. 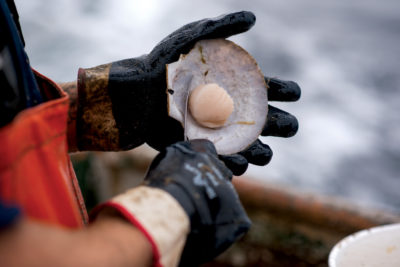 Cutting scallops on the dayboat Chasin’ Rainbows out of Ocean City, Md.

After loading 700 pounds of ice onto the boat at Martin Fish Co., we came out of Ocean City Inlet at midnight into a 4- to 6-foot Northeast swell leftover from a two-day blow. The captain and crew took turns on watch and tried to sleep in the four bunks in the bow during the run out.

After 4 1/2 hours of pounding into the swell, we made it to the Mid-Atlantic Access Area, a closed area about 52 miles northeast of Ocean City. We joined a small fleet of dayboats and trip boats out of Cape May, N.J., that were dotting the horizon around us.

The 10-foot-wide dredge went overboard at first light, and within about five minutes of towing was full with 20 bushels of live scallops. The crew unloaded the scallops and started cutting as I put my ocean kayak in the water to document the boat working from another perspective. Chasin’ Rainbows pulled the dredge for a second tow in circles around my kayak and hauled back after a five-minute tow.

After the scallops from the second tow were cut, iced and packed in 50-pound cheesecloth bags, Tedford dropped the dredge over for a third and final tow. Within five minutes, the dredge was full again. Once the scallops and the dredge were onboard and secured, we started the four and a half hour run back to Ocean City. Tedford and the crew cut scallops on the way in. Approximately 7,000 scallops in the 10-20-count size made up the 600-pound limit of cut meats. They fetched about $12 a pound at the dock. 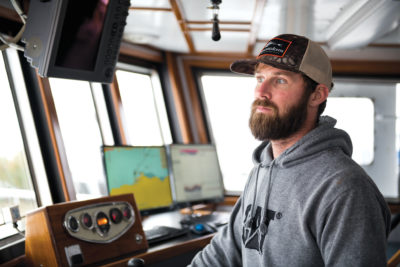 “The numbers are big out here,” Tedford said. “When my first motor went up, I had to take out a home equity loan and use credit cards to replace it.”

Selling the scallops, however, is not hard. Dayboats have the ability to provide their customers with a premium fresh product. The quick turnaround translates to a longer shelf life after it reaches the customer.

Charles Wiscott is a 35-year-old captain in his 13th season of running scallop draggers. His family has been invested in the fishing industry for multiple generations. Wiscott made his first trip scalloping on his father’s dragger when he was 7. David Wiscott ran the Susan L.

On Jan. 6, I arrived in Seaford, Va., and loaded my gear onto the 83-foot-long, Italian Princess owned by Seaford Scallop Co. The crew was topping off the boat with 10,000 gallons of diesel fuel and preparing for departure.

The dragger Captain Billy Haver was tied up next to the Italian Princess at Seaford Scallop Co. That boat was the scene of a tragic and violent death at sea last fall. Franklin Vazquez, a crew member with a documented history with heroin and domestic violence, stands accused of murdering a crew member and assaulting two others with a hammer and a knife while working 55 miles off the coast of Massachusetts. It reminded me of the importance of getting on the right boat. Industrywide, captains struggle to find good crew, and reliable crew members struggle to find the right boat. It adds a layer of risk to an inherently dangerous job. 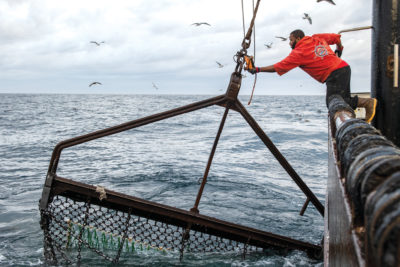 Devon Leigh, a crew member on the Italian Princess, prepares the rigging on the dredge as Capt. Charles Wiscott drops it overboard for another tow.

Wiscott estimated it would take six full days to hit their quota for the trip. The dredges went into the water at first light, and while pulling in the first tow, a hydraulic line on the port side went up, spilling hydraulic oil all over the upper deck. Wiscott was able to secure the port-side dredge on the deck of the boat. Wiscott hailed his brother, Jake, captain of the Sea Quest out of Cape May, for spare parts to fix the hydraulic lines. Jake Wiscott made his way over to us and was able to transfer spare parts he had onboard.

Though the crew was unable to fix the hydraulic lines with the parts on hand, the experience demonstrated the importance of being connected with other boats, especially on a trip boat.

Even with one of the dredges out of commission, Wiscott was able to keep the deck full of scallops and his crew working. During their 18- to 20-hour shifts, the captain and crew spent most of their time cutting and washing scallops. While cutting the meats, the crew graded the scallops into 12/20-count and 10-count, separating them into two buckets.

When a bucket filled up, the meats went from a hopper to a tumbler that cleaned and washed them. The washed meats were then packed into 50-pound cheesecloth bags and put on ice in the hold of the boat.

For the first two days of the trip, we had beautiful sea conditions and put an average of 65 cheesecloth bags in the hold. When the gale-force winds picked up on the morning of the third day, production dropped off slightly. The 18-foot waves made working more difficult for the crew.

Wiscott kept the bow into the sea, and the outriggers with the birds kept the boat from listing in the gusty winds. The conditions did not improve for the next three days, giving me an insight into the mental and physical endurance this trip-boat fishery requires.

Jay Fleming is a freelance photographer and writer based in Annapolis, Md.

Southern fleets look north for supplies; a builder’s life is measured in skiffs

Southern fleets look north for supplies; a builder’s life is measured in skiffs