When a typical Bristol Bay gillnetter goes screaming out to an opening and sets its gear in water where a seagull can almost stand, chances are about 50-50 that it’s being propelled by a Hamilton jet. Hamilton has dominated the industry for years, and for many good reasons, but as Hamilton’s sales rep, Matt Gordy, says: “There’s a lot of good competition out there.”

For Bristol Bay boats, Hamilton is meeting the competition with the HTX30. “That’s our new tapered impeller, mixed-flow jet.” The HTX30 features a conical wear ring so that the impeller tip tolerance can be reset as it wears down.

“We just put a pair on a Beaver Valley boat,” says Gordy, who notes that it may be the last from the builder. “It’s got our new AVX electronic control system, with all the bells and whistles. It’s got the Mouseboat/3-axis controller, it’s got the handheld remote for the aft deck, so it’s going to be a very advanced bay boat.”

The handheld control comes with a 9-meter umbilical that can plug into a bulkhead fitting and give the skipper complete control including lateral movement.

“It does the math for you so you, so those complex maneuvers where you would be dropping a bucket and raising a bucket and then steering to counter to create that lateral movement — our Mouseboat or joystick does that for you.”

When it comes to service, Gordy believes Hamilton has the best. “We have the largest spare parts inventory in the world,” he says. “And we have our own foundries and are making our own parts from raw materials, which is pretty unique.”

One of Hamilton’s service managers, Colin Davis, recalls being in Bristol Bay just prior to the opening of salmon season, when a customer came to him with a serious problem.

“I was walking through the boatyard, meeting people, and this guy came and his thrust bearing was failing. I went to see the boat, and the bearing was growling. I arranged for all the parts to get goldstreaked to Anchorage. I picked them up and flew out to King Salmon and was able to rebuild his front end there in time for him to go fishing, all in all it was three days.”

The Finnish marine jet builder Alamarin has been around for decades but is a relative newcomer to the Bristol Bay fishery, having made an entry with its Omega 42 and Omega 37 jets. 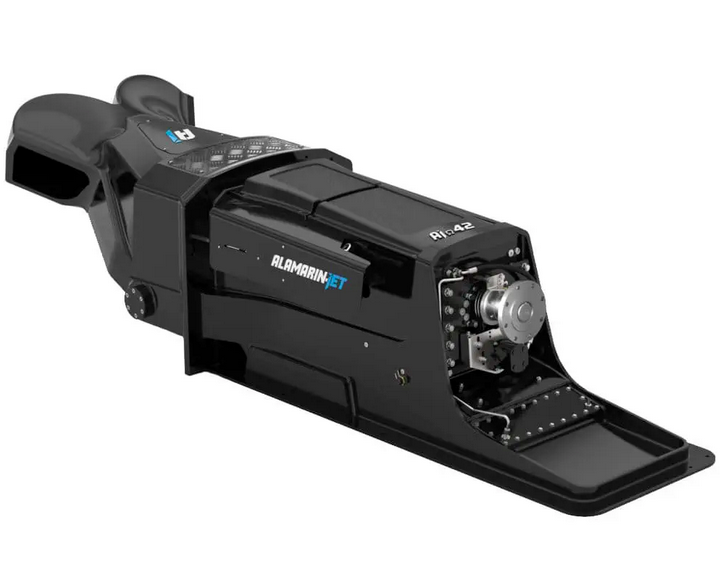 “We put an Omega 42 on a boat built in Homer, the Evo,” says John Miele, Alamarin sales manager for Asia and the Pacific. “The owner wanted a jet with the power to get up on step with 20,000 pounds, to get those fish to the tender faster.”

The Omega 42 can handle up to 2,040 horsepower, and the Omega 37 can take up to 1,200 horsepower, and both feature Alamarin’s dual-angle shaft, as well as a conical impeller housing that can be shimmed as the impeller wears.

When it comes to competition, Alamarin is betting on service to attract new customers.

“We are setting up a service center in Naknek,” says Miele. “It will be fully stocked with parts and technicians, and there won’t be any delays waiting for parts or service. No one wants to hear that a mechanic is flying up from Seattle.” In a fishery where some captains say they’re losing $50,000 for every day they can’t fish, Alamarin could make waves.

Fisherman and boatbuilder Tom Allioti prides himself in choosing only the best components for his boats. His company, NTG Fabrication, equipped their 2021 vessels, including the graphics wrapped Killer, with UltraJets.

“Engineered and built in Sweden, MJP’s proven stainless steel, mixed-flow and aluminum, axial-flow waterjets are used in many diverse applications, including commercial fishing.”

According to Nemeth, the Ultrajet is designed with low operating costs and ease of maintenance in mind. “The team at MJP believes in a full-service approach,” says Nemeth.

“From performance and efficiency to aftermarket support and service, MJP is a true marine propulsion partner.”

As Hamilton Jet’s Matt Gordy says, “there’s a lot of good competition out there,” and the primary beneficiaries will be the Bristol Bay fishermen.