Rebuilding a Duffy after more than 30 years

“It was better than the day she was built.” That’s what the owner of the Salty Cod told Bruce Farrin after he took delivery of his boat this past fall.

The Salty Cod, a fiberglass 35 Duffy lobster boat out of Friendship, Maine, was built in the 1980s, and after more than 30 years of lobstering needed a lot of help when she showed up at Farrin’s Boatshop in Walpole, Maine.

It started with “stripping her right down to the washrails,” says Farrin. That included removing the plywood and oak-framed wheelhouse and then building a new one, rebuilding the cuddy cabin and replacing the washrails forward of the steering bulkhead. The hull itself was in good shape. “She had been bumped a couple of times, but never damaged heavily.” 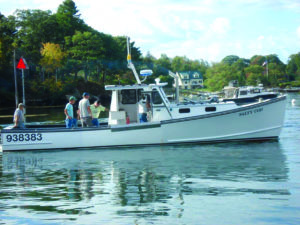 After basically being rebuilt, the Salty Cod is ready to go back lobstering. Farrin's Boatshop photo.

The cockpit deck, which Farrin says, “for some reason was still good,” only had to be refastened with stainless steel screws. New shafting was installed, and “there was pretty much all new plumbing, new hoses, new wiring.” The Salty Cod was repowered at Art’s Marine Services in Owls Head, Maine, with a 300-hp John Deere, prior to arriving at Farrin’s Boatshop.

Farrin’s Boatshop has had several older lobster boats similar to the Salty Cod. “I call them complete rebuilds,” Farrin says. Despite the cost of such a project, “it does save the guys money in the long run.”

A boat as yet unmarked with the daily scars of lobstering is a 45 Young Brothers built as a bare hull at S.W. Boatworks in Lamoine, Maine, before being trucked to Farrin’s Boatshop to be finished off.

When launched — probably at the end of March — for a Harpswell, Maine, fisherman, the 45-footer will hit the water with a 750-hp John Deere and a split wheelhouse. It will be all composite construction with lobster tanks below the deck amidships. Farrin describes it as an “offshore dayboat” whose owner “plans on long days but not overnight.” When she doesn’t get in until late at night or if a night is spent offshore, the crew can take advantage of a 10-kW Northern Lights genset for lighting and running electric pumps in the lobster tanks.