Pop-up pots and the search for ‘whale-safe’ gear

I lay becalmed one summer night trying to sail from Cutler, Maine, to Nova Scotia. I drifted in the dark, laying across the cockpit in my survival suit and listening for the thrum of a freighter that might run me downhill. Out of the inky black came a blast like a tire exploding, followed by a ringing like bellows, the sound of a great inhalation. It was a whale. I sat up, startled, but could see nothing. Right whales had been in the area that summer and frequented the channel where I lay adrift. They passed me for 15 minutes or so and then were gone.

The morning broke with the wind driving me right back to Cutler, through a carpet of lobster buoys. There are an estimated 3 million traps off the coast of Maine, ground zero for a $483 million dollar industry. Unfortunately, the last 400 North Atlantic right whales are an endangered species with a propensity to get tangled in the buoy lines of fixed-gear fishermen anywhere between Florida and Newfoundland. According to the New England Aquarium, 83 percent of these whales show signs of having been entangled at least once and 59 percent more than once.

While right whales also die from ship strikes and other causes, the environmental groups that are part of NOAA’s Atlantic Large Whale Take Reduction Team are calling for eliminating rope in the water column.

Fixed-gear fishermen on the West Coast have a similar problem. A spike in humpback whale entanglements in 2014 and 2015 led the environmental group Center for Biological Diversity to sue the commonwealth of California in 2017, resulting in a settlement that will require fishermen to limit spring fishing and pursue a conservation plan that could include ropeless or “pop-up” gear, as they call it in California. 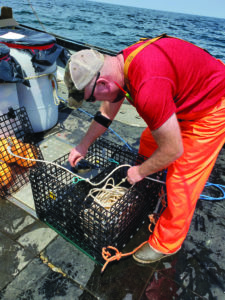 Handling ropeless gear adds time to a day's work. If a fisherman spends 5 or 10 minutes more per trawl, that can add up to hours in the course of a day. EdgeTech photo.

Ropeless fishing is out of the question for Maine at this point, as far as Cutler lobsterman Kristan Porter is concerned.

“There’s just no way to make it work,” he says, emphasizing, “no way.”

Porter, president of the Maine Lobstermen’s Association and a 2018 NF Highliner, points out a host of obstacles for shifting the fishery to ropeless gear, beginning with the time it takes to use most of the systems being developed. Porter visited a lobsterman in Australia who was using the Desert Star bagged-rope system.

“It’s slow and tedious,” says Porter. “You send an acoustic signal down and wait for wire to burn that releases the buoy and rope. Then it’s just a small buoy that comes up, and you have about five minutes to get it before the tide drags it under.” The problems don’t stop there.

“You’ve got these bags of rope, and you need three sets for each trawl: one on the traps, one on the boat, and one getting rebagged,” says Porter. “How are we supposed to have space on the boat for all that? Not to mention the cost.” According to Porter, regulations would also have to be changed because gear must be marked at the surface.

Porter has declined invitations to participate in testing. He argues that since 2002, only one whale has died from being entangled in Maine lobster gear, and that since 1997 the industry has eliminated floating buoy line at the surface, added break-away links to help entangled whales free themselves, replaced floating groundline with whale-safe sinking line, and eliminated 2,700 miles of buoy line by establishing a minimum number of traps per buoy.

Mark Baumgartner, associate scientist at the Woods Hole Oceanographic Institute, has talked about the entanglement issue with Porter and believes ropeless fishing can work, and that it may be the best option for enabling fishermen and whales to share the same waters. But he acknowledges that it will take time to find a system that works in a way that is effective and economical for intensive trap fisheries, such as Maine lobster.

Baumgartner acknowledges Porter’s points, but notes that besides Desert Star, a number of systems are in development and limited production, some of which are being tested in other fisheries.

“The idea had been around for a while, but in 2017 we started thinking about ropeless fishing again after 17 whales were killed that year,” says Baumgartner. He points out that the right whale population has been declining since 2010, and the smaller it gets the more pressure will be put on fishermen to take action. “It may take five years to get something that works,” says Baumgartner. “But if right whales continue to decline, we will need a solution in the coming years to avoid fishery closures. And if we start now, we’ll be that much closer to having a system that works when we really need it.”

In California, participants in the Dungeness crab and other fixed-gear fisheries must come up with a conservation plan as part of their settlement with the Center for Biological Diversity. A number of fishermen working with the environmental group Oceana are wondering if ropeless gear could be part of the solution.

Shester organized some tests in May 2018, and is continuing to expand those efforts. “In September 2019, we organized a gear innovation day and looked at five systems: galvanized release, Desert Star, Fiobuoy, SMELTS, and Ashored.”

A dozen California crabbers, including 2019 NF Highliner Dick Ogg of Bodega Bay, and Calder Deylerle of Moss Landing, joined Shester. They tested a galvanic release system that is the epitome of simple: A wire rusts away over a calculated amount of time and releases a buoy and line. They also tested the Desert Star system described by Porter. 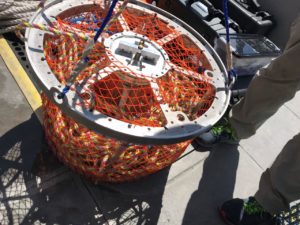 Shown here upside down, the Ashored system uses a proprietary acoustic signal that frees the buoy from its base and allows it to lift the line. Oceana photo.

“We tested the Fiobuoy system,” says Shester. “That’s a spool with and acoustic release mechanism.” Shester and company also tested the SMELTS system, which uses a compressed-air tank activated by an acoustic trigger to inflate a lift bag.

The last prototype they worked with was the Ashored system, developed by a company in Nova Scotia. It’s a variation on the theme of a container holding rope and buoy that are deployed by an acoustic signal to the release mechanism.

“We were supposed to have EdgeTech here, too, but they couldn’t make it,” says Shester.

In October 2019, EdgeTech’s Rob Morris was in the Canadian Maritimes testing the new system with snow crab fishermen.

“If you want to stop whale entanglements, I guarantee our system will do it,” says Morris. “We’re in production and could deliver in 30 days.” EdgeTech’s system consists of a buoy attached to the lid of a cage that holds the buoy line.

“We made it so the fishermen can make the cage themselves to match the footprint of the gear they’re using,” says Morris. “The acoustic release is the heart of the system, and can be adapted to whatever the fishery requires.” The potential weakness of the EdgeTech system is that when the buoy line gets flaked back into the trap it could become tangled. “Over hundreds of tests, we have never had a snarl,” adds Morris.

Baumgartner sees promise in several of the systems, but getting a buoy to the surface is only one part of the problem to be solved; fishermen need to be able to find their own gear and know where other gear is so they don’t set on it.

“I’m working on a system that will constantly update the position of the gear on bottom and allow fishermen to know where each other’s gear is,” says Baumgartner. “Right now, the most basic system registers the last known position of the gear at the surface. But if your gear moves from that surface location, other fishermen won’t know exactly where it is. And if it moves a long way, you can’t retrieve it.” 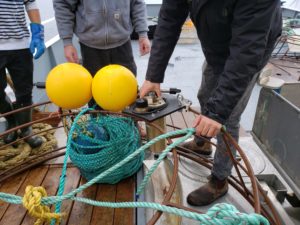 The EdgeTech system, shown on Canadian snow crab gear, uses an acoustic modem that reportedly is adaptable to almost any fishery. EdgeTech photo.

In high-energy environments like the coast of Maine, that may not be ideal. A fisherman may send a release signal to gear that has moved too far away.

A more common method of locating gear is called ranging, in which a boat sends a ping to its trap in the area where it was set, and the trap responds.

“Then you can triangulate and find it,” says Morris, of EdgeTech. If the trap is too far from that point, it is also difficult to locate. In the case of EdgeTech, for example, the signal to the trap can reach around 1,000 fathoms.

According to Baumgartner, gear equipped with an acoustic modem that constantly updates its position using information from passing ships is the most accurate location system possible. “The system we’re working on uses an acoustic modem that responds to passing ships with its position, so that they know where it is,” he says. As Baumgartner describes it, every time a trap equipped with the acoustic device answers a ship that sends it a ping, the coordinates get plugged into a database that fishermen can use to check on their own gear while at home. “But this is all in prototypes. Six months ago it existed only in my brain,” he says.

The technology, particularly the acoustic modems and release mechanisms that are the crux the ropeless/pop-up systems, are far from cheap.

“Ours are $3,750 per unit,” says Morris of EdgeTech’s pots. “Multiply that by 40 trawls. It’s not fair to ask the fishermen to pay that.” Baumgartner and Shester agree. All contend that the cost of the gear needs to be subsidized somehow.

Fishermen are keeping a close eye on developments, but pop-up gear is still a long way off. Recent rules proposed for protecting whales in Maine make no mention of ropeless gear, nor do proposed or pending rules elsewhere in the country.

“I’m not aware of anything pending in the regulations,” says Baumgartner.

Baumgartner and Shester also point out that entire fisheries do not need to shift to ropeless gear. “We could start this in areas that are closed because of whales,” says Baumgartner. “It’s a way to get fishermen back in those areas and increase demand so that we can get the cost down.”

According to Caroline Coogan at NOAA, ropeless gear can be used in areas that aren’t closed to trap fishing if fishermen get authorization from state or federal authorities that allow them to fish without surface marking. “We are looking into modifying areas closed to lobster and other trap/pot fisheries to protect whales (so closed under the Marine Mammal Protection Act) to areas closed to the buoy lines rather than closed to the fishing itself,” says Coogan. “Fishing would still be subject to gear marking requirements of other fishery management regulations, so an exemption to those requirements would still be necessary.”

In the meantime, fishermen continue to watch the water for whales and the horizon for a change in tide.