Watch out for the weak link

On Aug. 26, 2019, the purse seiner Ariel, its main fish hold packed with pink salmon, was crossing Alaska’s Sheep Bay, an extension of Prince William Sound, to meet a tender. Visibility was 10 miles, seas one to two feet.

Seventeen months earlier the Ariel had gone through a condition and valuation survey on March 28, 2018 and judged to be “well maintained and fit for intended use.” The Ariel’s owner was a member of the Alaska Marine Safety Education Association.  Both the owner and the Ariel’s engineer held Coast Guard drill instructor qualification cards. In fact, emergency drills were held monthly; the last one had taken place on Aug. 6, not quite three weeks previous. 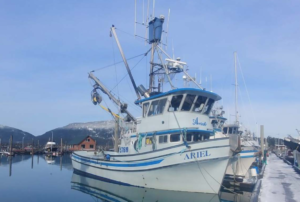 The Ariel was a well-maintained vessel with a very safety-conscious owner and crew. Compass Rose Marine Surveyor photo via NTSB.

That’s a pretty good level of safety consciousness and it would be a good bet the Ariel would soon offload its catch to the tender, anchor for the night and be back fishing the next day. But 6:30 p.m. marked the first inkling that something was going terribly wrong on the 50-foot fiberglass seiner; it wasn’t long before the crew was in the seine skiff.

The engineer had been the first to smell smoke. A quick look into the engine room showed flames near the generator. The main hatch was quickly closed and portable chemical fire extinguishers were released through a hatch in the galley. That didn’t work and smoke drove the crew out of the galley and the captain from the wheelhouse just after making a Mayday call. Extinguishers were also discharged into the stack on the deckhouse and ventilation inlets on either side of the cabin. To no avail.

Quickly it was determined it wasn’t safe to be on the Ariel. The crew boarded the skiff and then stayed about 100 feet from the seiner. Only then did the Halon system discharge, but the smoke dissipated only briefly before increasing as the fire rekindled. After burning for several hours, the Ariel sank at 11:35 pm in 275 feet of water. Fortunately, none of the crew was injured. They were picked up by nearby fishing boats.

The National Transportation Safety Board determined the cause of the fire was fuel leaking from the generator fuel supply line. The fuel was run through USCG-Type-A1-rated reinforced rubber hoses from the valve manifold to fuel filters and then to the generator. However, over time hoses can become worn and fittings loose, allowing fuel to come in contact with a hot surface and be ignited,

Contributing to the fire and the sinking of the Ariel was air entering through fixed-open inlets designed to ventilate the engine room. The NTSB wrote: “to ensure the effectiveness of the (Halon) system and prevent the reintroduction of oxygen to the space, ventilation inlets should be designed or modified to be closed remotely or covered.”

In summary, it seems that no matter how safety conscious a boat’s owner and crew may be, there’s always something that might go wrong. It’s best to be vigilant and always looking for that weak link.