As the “graying of the fleet” poses concerns to the industry, a recent research by NOAA Fisheries suggests equipping the next generation of U.S. commercial fishermen for success using tools that have helped beginning farmers.

New research from NOAA Fisheries titled “A livelihoods assessment of new entrants within the US fisheries agriculture continuum,” published by researchers Marysia Szymkowiak and Melissa Rhodes-Reese, identifies the challenges young fishermen face and, maybe surprisingly for some, recommends equipping them for success using tools that have helped beginning farmers.

The new research is the first to examine and compare the generational crisis across the fishing and farming industries. Based on their findings, the research team recommends steps to help young fishermen that are modeled after long-established national programs which have successfully helped beginning farmers.

According to the study, even though “commercial fishing and farming are critical industries that ensure national food security, provide employment opportunities, and contribute to the well-being of rural livelihoods and communities," in the U.S. “both industries face a looming challenge in the aging of their workforce and concerns about their long-term resilience.” 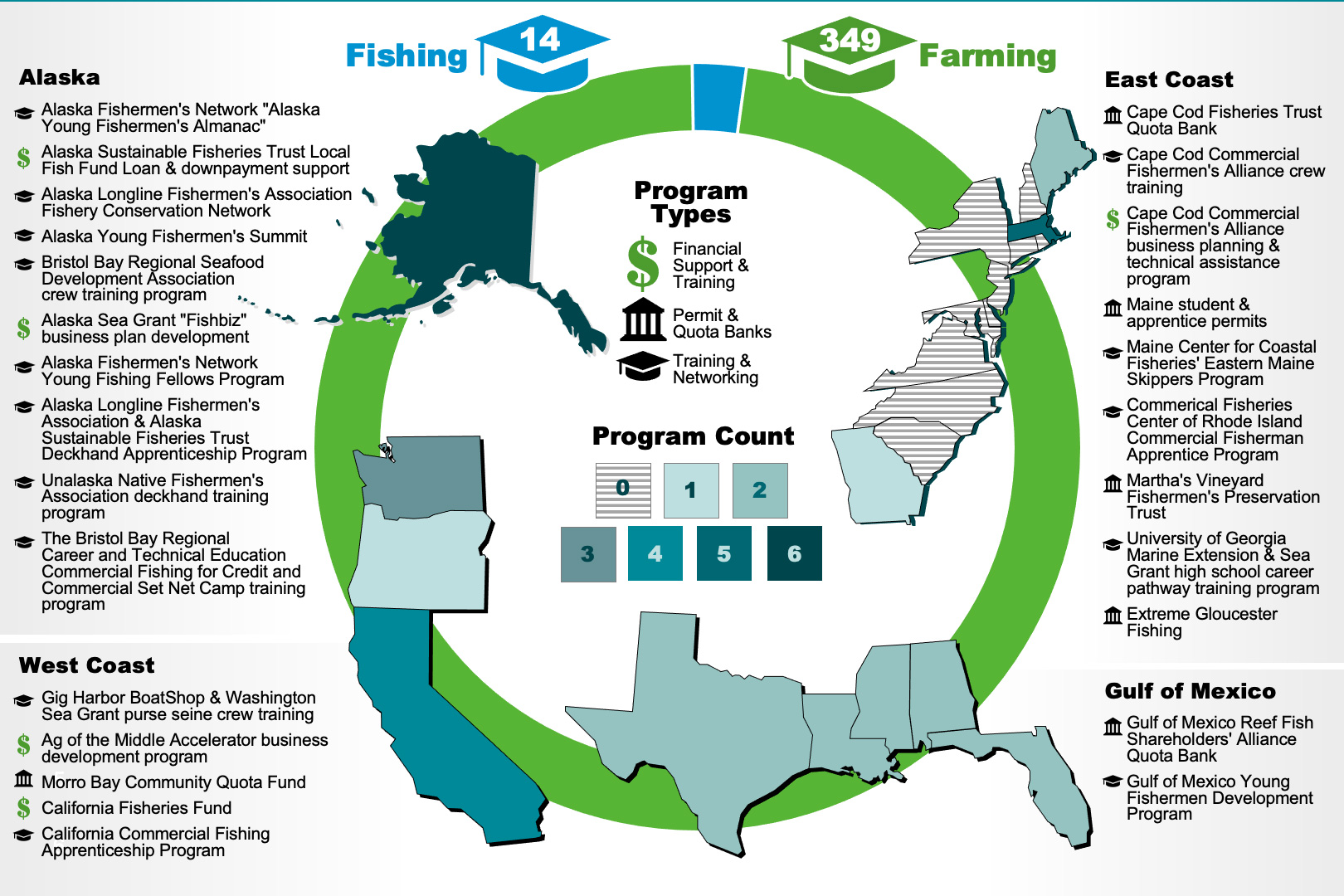 The 'graying of the fleet'

With so many U.S. commercial fishermen on the cusp of retirement, the “graying of the fleet” poses concerns for industry resilience and national food security if there are not enough young fishermen willing and able to take their place. The challenges this poses are not hugely different from those faced by the farming industry. The study notes that, despite the strikingly similar situation, the level of national support is quite different, adding that “In contrast to the decades-long national-level recognition of beginning-farmer issues, the aging of the fishing industry was acknowledged only in the 2010s. Documentation of this issue grew out of Alaska, where the U.S. fishing fleet is relatively new.”

Founded in 1978, ALFA has successfully represented longline fishermen in securing sustainable access to healthy halibut, sablefish and rockfish stocks. The organization notes that “30 years ago, a young person who wanted to fish commercially needed a boat, some fishing gear and a sense of adventure to get started in the business. Today, young fishermen face staggering entry-level costs, high operating costs and a level of risk that is equivalent to buying a starter hotel, instead of a starter house as a first step in home-ownership.”

According to ALFA, “studies show that the average age of Alaska’s commercial fishermen is now 50, up by nearly 10 years since 1980.  Fishery access permits and quota are being lost from rural Alaska communities” and that’s the reason why its members are glad for the fact that the Young Fishermen’s Development Act passed in Congress and was officially signed into law last December, as it offers training, resources for the industry’s newest participants.

Various Alaskan organizations are now partnering to build the next generation of fishermen. According to ALFA, there is not a single federal program currently in place that's dedicated to training, educating and assisting the next generation of commercial fishermen. So, the Alaskan organization has joined forces with the Fishing Communities Coalition, a nationwide fisheries advocacy group to advocate for a national program to support young fishermen.

The research now published by NOAA fisheries may help the endeavor. “Our findings show how relatively little there is to help young fishermen compared to farmers,” Szymkowiak said. “In farming there is a holistic, centralized, national-level approach. In fishing it’s been from the ground up. They’ve been coming up with their own ways to address the problem with minimal funding through small programs across the country.”

Based on their findings, the team recommends specific steps that can help support young fishermen entering the industry:

NOAA Fisheries believes that by addressing the issues facing new fishermen now, a new generation of fishermen can be built – one that is ready and capable of fishing national waters in the future.

“We need to think about the generational gap in fisheries as we have in farming,” Szymkowiak said. “Fishermen are facing similar issues to young farmers. We need to equip them similarly.”

Seafood: The next generation