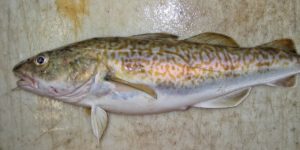 The fall 2019 stock assessment returned biomass numbers for gulf cod below the necessary threshold as a food source for the endangered Steller sea lion.

The infamous Blob of 2014 — a mass of warm water that hovered in the Gulf of Alaska — likely depleted the cod's food supply and severely restricted recruitment. The fall 2017 Gulf of Alaska survey yielded historically low numbers at 46,080 metric tons, down more than 80 percent since 2013.

“That warm water was sitting in the gulf for three years starting in 2014, and it was different than other years in that it went really deep and it also lasted throughout the winter," said Steven Barbeaux with the Alaska Fisheries Science Center in Seattle. "You can deplete the food source pretty rapidly when the entire ecosystem is ramped up in those warm temperatures.”

The long view could hold a positive swing if the fishery can recruit the strong year classes of 2018-19.

The good news is that most of Alaska's P-cod landings come from the Bering Sea and Aleutians fishing areas, which remain open for fishing. Still undecided is whether the state-managed cod fishery will open for a 2020 season. The federal action left allowance for the relatively small quota of the inshore fleet. The state's Bering Sea fleet will fish with a 14 percent reduction in quota, and no change for the Aleutians state quota.

Meanwhile, Russian fleets will be fishing on a 180,250 metric ton quota, most of which will enter the market with the Marine Stewardship Council's blue ecolable.

Alaska cod: Gulf cod stocks creep back, but Bering and Aleutian still down