A rapid response by nearly 800 Alaska fishermen will provide a guideline for giving them a hand up as the coronavirus swamps their operations.

An online survey by Juneau-based nonprofit SalmonState asked fishermen about their primary concerns both before the covid outbreak and in the midst of the pandemic in April. It also asked what elected officials at local, state and federal levels can do to help them directly.

More than half of the 817 responses came in over four days, said Tyson Fick, Salmon State communications adviser. 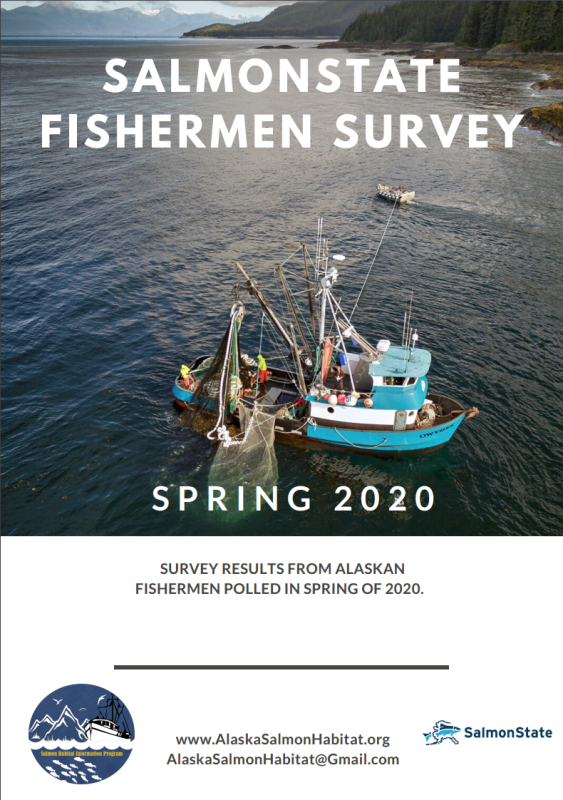 “Clearly, people were interested to have their stories heard and to weigh in. In several ways we feel like we had a very broad swath of regions and gear types and fishermen,” he said.

A total of 779 responses (95 percent) were accepted of which 50 percent were Alaska residents, 28 percent were from the Lower 48, and 22 percent did not provide resident information.

Nearly 95 percent said they participate in a salmon fishery, with the majority fishing for both salmon and a mix of nearly all other species commercially harvested in Alaska.

Some takeaways:
Prior to covid, the top three concerns among fishermen were fish prices (65 percent), the Pebble Mine (60 percent), and climate change (53 percent).

After covid hit, concerns shifted to loss of income (75 percent), preventing the spread in coastal communities (69 percent), and bad policy decisions being made while fishermen are distracted (58 percent).

Fishermen are combating the negative effects by using a combination of strategies while doing more work with less time and resources. More than half said they would look for non-fishing related work, 27 percent said they would fish a longer season, and 26 percent plan to fish with fewer crew. Nearly a quarter expect to venture into direct marketing or increase dock sales. Less than 5 percent said they would sell their fishing businesses.

By far, affected fishermen said giving them direct payments from emergency relief funds would be the biggest help (82.73 percent). The second and third most popular options were favorable debt consolidation opportunities (33.25 percent) and debt forgiveness (28.61 percent).

Fishermen provided thoughtful responses when asked about actions of policy makers that revealed several themes.
At both the congressional and state levels, stopping the Pebble Mine was the most frequent request, at 24 percent and 18 percent, respectively; keeping fisheries open also was a top issue.

For Alaska Gov. Mike Dunleavy and the Alaska Legislature, respondents said they should focus on covid-related health and safety support for fishermen and provide help with marketing.

Fishermen also shared their perceptions of the Dunleavy administration, saying it favors other interests over commercial fishermen, naming mining, oil and gas, sport and personal use fishing.

At the local level, fishermen expressed confusion over unclear guidelines for following local health mandates and suggested that signs at airports and boatyards along with a one-page guidance document would be helpful. They also mentioned that local communities should do all they can to support processors and their workforce.

Fishermen also shared ideas on local taxes and harbor fees, and changing infrastructure to include things like cold storages in recognition of dynamic market patterns.

Less than half of the fishermen respondents are members of a commercial fishing organization or trade association and the survey brings their voices into the conversation, said Fick.

“These are frontline workers, small business owners who are pretty tight lipped, and they don't have fancy spokespersons or lobbyists speaking on their behalf. So they often just get left out,” he added.

The goal now is to get the goods into the hands of those making the decisions on how covid relief funds are spent and invested.

“Our commitment was to help get these results to decision makers on behalf of fishermen,” said Lindsey Bloom, SalmonState campaign strategist. “We will do our best to get the information out as far as wide as possible for the fleet.”

The fishermen’s survey is a project of the group’s Salmon Habitat Information Program.

Laine Welch is an independent Kodiak, Alaska-based fisheries journalist. Click here to send her an email.

Slinky pots to Pebble Mine: Alaska's best and worst of 2020