If you fish Bristol Bay and favor fast gillnetters able to get on step with a lot of weight — we’re talking 15,000 pounds — your chances of getting such a boat have increased. Tom Aliotti, a Bristol Bay gillnetter and boatbuilder, has moved his Bellingham, Wash., boatshop from a 2,000-square-foot building to a space 15 times the size.

Last spring, Aliotti Enterprises shipped two new 32' x 15' 6" gillnetters, the Anna Maria and the North Coast, to Bristol Bay for the 2019 season. They were the first gillnetters out of the 30,000–square-foot (175' x 175') boatshop that previously was the Aluminum Chamber Boats building in Fairhaven Marine Industrial Park. Now instead of building one or two gillnetters between Bristol Bay seasons, Aliotti plans on using the larger working space to build four gillnetters at a time. 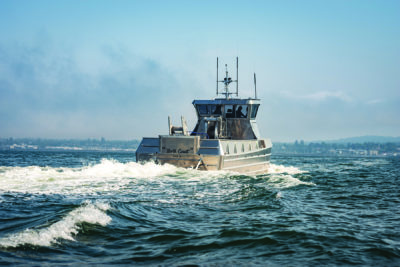 That’s a Kinematics stern roller and
net drum on the North Coast.

“We want to build more but are only going to commit to four,” he says. That’s four gillnetters before the 2020 Bristol Bay season in addition to two during the fishing season. Plus several setnet skiffs will also be built this year, as Aliotti seeks to expand beyond just gillnetters. “I’m always looking at new markets,” he says.

Only a couple of years ago, Aliotti could have been described as a reluctant boatbuilder. In early 2018 — when he was building one or two a year — he said: “I don’t like to build too many because I’m building competition for myself in the bay.”

The move to a new space has shifted Aliotti’s perspective.

I’m helping families and helping the industry by adding jobs for these guys,” he says. “That gives me good enough reason to do it.”

Aliotti started building Bristol Bay gillnetters in 2009 after being disappointed with a gillnetter someone else built for him.

“I tried to get him to do what I wanted, and he didn’t do it. So I did it myself.” Building only in the off-season when he wasn’t fishing, he still managed to build 11 boats before moving into the larger building. All the boats were built to Aliotti’s design, which is based on what he’s learned over years of gillnetting in Bristol Bay. 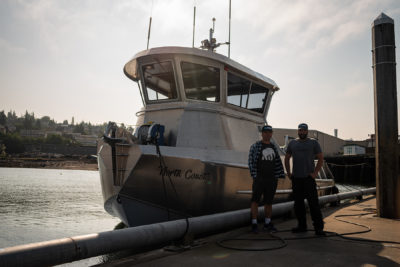 Tom Aliotti (left) and his partner, Nigel Groom, and the North Coast, one of the first two boats built in the new boatshop.

Aliotti follows in the footsteps of his father, Nick Aliotti, and his grandfather, the senior Tom Aliotti, who fished from a sailing gillnetter. The third-generation Bristol Bay fisherman and future boatbuilder started when he was 14, and ran his first Bristol Bay boat at the age of 18. Now 51, he’s logged 37 years of fishing, which is plenty of time to observe how boats from various builders perform and to start forming an idea of what the optimal Bristol Bay gillnetter should be. Fast, maneuverable and able to carry a lot of weight sums it up.

In shallow water he does get on step with 15,000 pounds while hitting 22 knots (40 knots in a lightweight condition), but not in deep water. Shallow water for Aliotti is 10 feet or less. Then the water “is almost harder than softer. It gives the boat lift. The shallower you go, the more boat comes out of the water, naturally.” That might be why he spends about 50 percent of his time in Bristol Bay fishing in depths of 5 feet or less.

Building a boat able to hydrodynamically lift part of itself out of the water and start planing while carrying a load of salmon requires some trouble and expense. But it allows you to get from the grounds to the dock, unload, and then back to the grounds quicker than your competition. Perhaps more importantly, if offers the opportunity to prospect and not worry too much about being outfished.

“You can gamble, go away from the fleet and try some sets where there’s nobody but there might be some fish,” says Aliotti. But when you need to return to the fleet with, say, 10,000 pounds aboard “and can’t get on step that gamble move we made for that 10,000 pounds, by the time we get to where the fish are now, we are going to be like everybody else. We are not going to be ahead of the game anymore because we couldn’t get there fast enough.” 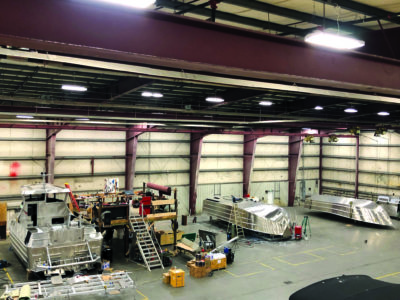 Aliotti Enterprises’ new boatshop is 15 times larger than its previous building, more than enough room to build four gillnetters at once.

Aliotti attributes much of his gillnetters’ ability to get on step to the dual 500-hp FPT N67 EVO engines. “FPT engines help a lot with the weight and power distribution. They are lighter weight. They are lighter by 600 pounds than Cummins” in an equal power range.

Currently FPT engines are in four Aliotti boats that have been fishing Bristol Bay, and the next four boats going out of his shop are scheduled for the same dual FPT engines. They will be matched up with ZF305 gearboxes and 340 UltraJets. Aliotti favors the 340 UltraJet, as opposed to the 340HT because the 340 “gives more speed,” whereas the 340HT “is known for weight carrying capacity.”

Then there’s the balance issue. Aliotti doesn’t feel his hull design is that much different from most other Bristol Bay gillnetters.

“Most boats have similar designs,” he says. “It’s just about the balance of the boat that makes our boat a little different.” The tendency with waterjet-powered gillnetters “is to put all the weight in the back. I don’t believe in that,” he adds.

An Aliotti gillnetter with fish aboard is designed to sit the same way in the water as it would if fish weren’t aboard. The hull loads straight down. So while it might sit deeper in the water, the angle of the bottom of the boat hasn’t changed when you try to get it up on step to planing.

Being able to get on step with a lot of fish doesn’t mean Aliotti is skimping on the scantlings in order to make his design as light as possible. In fact, he says, his boats have more structure than are found in a lot of gillnetters. “Instead of being heavier, we have more of them,” he says of the framing. Whereas some builders “stay within 20 inches of a square without having structural support, we are like 12 inches to help support” the hull. The structure in the bow, Aliotti says, is wire-framed, which is extremely stiff and prevents the hull from flexing as it pounds through seas. That will make the boat last longer and resist cracking.

Of course, speed and an efficient hull shape is helpful. But if you can’t deliver a quality product, you’re not going to be in business very long. On an Aliotti gillnetter, that starts when the salmon come out of the net. As the salmon fall out of the net they don’t have to be pushed toward the hold. They land on a rubber mat that’s over a deck designed with a slope to it. “They are naturally going to the fish hold that’s open,” says Aliotti. “You don’t have to push them.”

That feature, he says, not only keeps the fish from being bruised, it “keeps the crew fresh and gives them more strength to do what’s important, which is to get the fish out of the net.”

Once in the hold, salmon are chilled with an RSW system. All of Aliotti’s boats are designed for RSW. He says he’s been using the PacWest 10-Ton RSW system “since they’ve been offered. It’s a bigger RSW system than most boats [have].” When an Aliotti gillnetter is fully loaded down, it carries 24,000 pounds in the hold and another 10,000 to 15,000 pounds on deck.

When it comes to crew accommodations, Aliotti’s design is “all about catching fish, not being comfortable,” but, at the same time, he describes the accommodations as “very comfortable.” The cabin below deck might not be the largest, but there’s a large refrigerator and stove and four “big, nice, comfortable bunks.”

Summing up how his boats differ from other Bristol Bay gillnetters, Aliotti says, “We are building Ferraris. Everybody else is building SUVs.”

Washington boatshop is back in the game

Washington boatshop is back in the game