The road to Pebble Mine is getting rougher.

Pedro Bay Corp., a Native organization in Alaska’s Bristol Bay region, announced late last month that nearly 90 percent of its shareholders voted in favor of conservation easements for more than 44,000 of the corporation’s 92,100 acres of land in southwest Alaska. The agreement would make the land off-limits to development, including Pebble Corp.’s proposed mining road.

“This transaction supports the values of our community members by protecting their land, their subsistence, and their traditional way of life,” said Pedro Bay Corp. CEO Matt McDaniel in a statement. “This is an opportunity that will provide our community benefits and economic value in perpetuity. After years of consideration, the shareholders have now made an informed decision on how to manage and protect their privately held ancestral lands.”

Just over a year ago, on May 22, 2020, the U.S. Army Corps of Engineers revealed that its record of decision on the proposed Pebble Mine would be based on building a northerly route to the mine rather than a southerly route via ferry across Lake Iliamna, which had been the preferred plan throughout the public comment process.

The new route was touted as a reduced environmental risk. But there was one significant hurdle — the road required access to Native land.

Three days later, the Igiugig Village Council released a statement saying it would not cooperate with the Pebble Limited Partnership’s plan to use a northerly route via road and pipeline.

The Igiugig Village Council controls the Diamond Point rock quarry, which would be required as the port for moving in mining materials and exporting the product.

“PLP’s plan for Diamond Point presented in the [environmental impact statement] does not fit with our plans for Diamond Point, and should not be considered an acceptable alternative,” the council said in a statement last year. 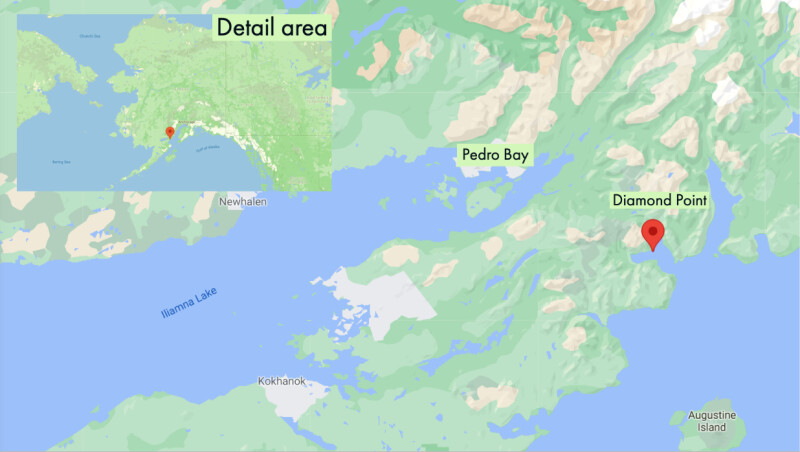 McDaniel of Pedro Bay Corp., warned Shane McCoy, Pebble Mine project manager for the Army Corps, that the company “has not, and will not, consent to the Pebble Limited Partnership’s use of its lands for the Pebble project.”

The Conservation Fund, an environmental nonprofit, is now raising funds to purchase the easements of the Pedro Bay Corp. land by the end of 2022. When the transaction is complete, Pedro Bay Corp. will retain ownership of the land, which will be subject to the terms of the conservation easements. Those will be held by the Bristol Bay Heritage Land Trust. In coordination with the corporation, the trust will be responsible for administering and enforcing the terms of the conservation easements in perpetuity.

The new agreement will expand a partnership between the trust, Pedro Bay Corp. and the Conservation Fund that in 2016 established protections for more than 12,600 acres of the corporation’s 92,100 acres of surface land “allotted under the Alaska Native Claims Settlement Act,” according to the group’s website. In all, more than 56,000 acres of the corporation’s land will “balance the Pedro Bay Corporation’s goals of land protection and responsible development on its lands,” according to a release from the Conservation Fund.

The route around Pedro Bay Corp. lands through state lands is rugged and mountainous, inhibiting infrastructure. And though the first permit application for Pebble Mine has been denied, the company is not prevented from applying again.

“The Corps continues to disregard our concerns, has failed in their trust responsibility to adequately consult with our tribe, and has not completed thorough analyses of the impacts this project will have on our people,” the council said in its statement regarding the first application. Igiugig Village Council “will continue to put the well-being of our people and our future generations first, as we have since time immemorial.”

Local Tribes and other stakeholders are seeking permanent federal protections for the region.