Citing observable and worrisome marine ecosystem changes, the Unangax̂ (Aleut) community of St. Paul Island has proposed co-management with the federal government and the community of St. George Island of a new marine sanctuary around the Pribilof Islands of Alaska, “encompassing 100 nm centroid boundaries around the two inhabited islands of St. Paul and St. George,” according to an official nomination proposal that was released Monday, Dec. 20.

For now, the sanctuary would be named Alaĝum Kanuux̂* (pronounced ahl-ah-GOOM ka-NOH), meaning Heart of the Ocean, and encompass nearly 53,000 square miles of waters, excluding a quarter-mile buffer zone around the St. George and St. Paul Harbors and all shoreside and submerged industrial facilities on both islands. The shoreward boundary would be the mean high tide line.

“The establishment of Alaĝum Kanuux̂ would allow conservation actions to follow our communities’ lead and ensure that tribal co-management is a central feature in the future of the Pribilof Islands marine ecosystem,” the document says. It is also referred to as the Pribilof Islands Marine Ecosystem (or Prime) Initiative. 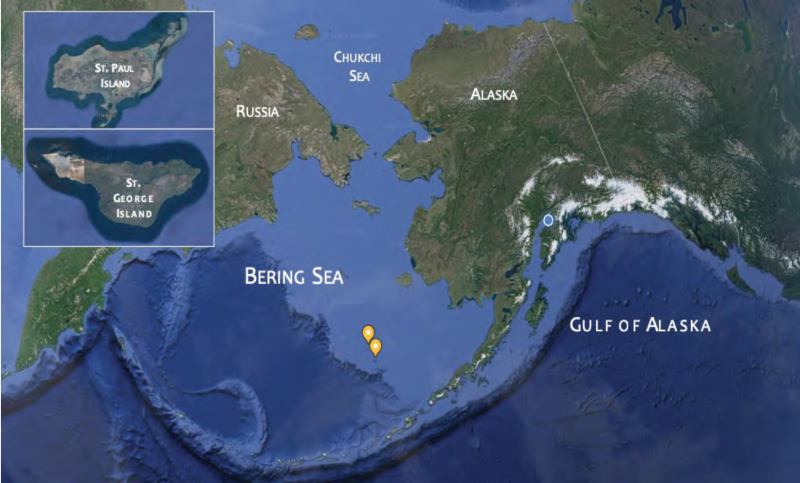 A unified approach to ecosystem management, protection and marine resource extraction is not unique in theory. However, this is the first proposal of its kind.

“The intentional embrace of new tribal co-management principles in the governance and conservation approaches of Alaĝum Kanuux̂ reflect a truly innovative vision, in direct alignment with numerous governance principles embraced by the federal government including Indigenous and community equity, the use of Traditional Indigenous Ecological Knowledge, and consultation with communities, fishermen, and others,” the proposal states.

The goal in designating a sanctuary is also intended to preserve and enhance existing commercial fisheries management and extraction.

“We are making this nomination because we need to get ahead of the changes that are happening around us but still keep our fishing economy strong,” said Simeon Swetzof Jr., F/V Wind Dancer and St. Paul tribal member. “Our tribe chose this national marine sanctuary process because of its flexibility. The North Pacific council will continue to manage fisheries in this area, and that will not change. The National Marine Sanctuaries Act is crystal clear that commercial fisheries will operate in the Alaĝum Kanuux̂, and that council management will continue. My commercial fishing colleagues and I are committed to this because we know fishing will be conserved alongside our cultural resources and the ecosystem.”

The proposal also documents a history rich in marine-centered human occupation and use of the islands, dating back at least 4,000 years, as well as the more recent history of colonization and enslavement — first by Russian fur traders in the 18th century, and then through the purchase of Alaska by the U.S. government in 1867.

“The Pribilof Islands were known and used but not permanently inhabited by humans until Russian fur traders enslaved 137 Unangax̂ from the Aleutian Islands and forced them to settle on St. Paul and St. George (Torrey and Krukoff 1978, Black 1983). They became an enslaved workforce for commercial northern fur seal (Callorhinus ursinus) harvesting operations that ended in 1972 on St. George and in 1984 on St. Paul,” according to the proposal document. “Even though commercial sealing, and thus our original and primary cash economy, ended, our Unangax̂ communities remained. As it has been for centuries, our cultures, economies, and food security on St. Paul and St. George are inextricably tied to the health of the animals, birds, fish — the overall ecosystem and everything within it.”

As long-term occupants and caretakers of Pribilof lands, the Unangax̂ community of St. Paul proposes this sanctuary in an effort to preserve their way of life, but also to forge a path to a new future that values Indigenous knowledge and Tribal leadership in federal policy.

“There is an opportunity and need for truly comprehensive and integrated scientific and Indigenous knowledge-based management approaches that account for this wealth of information and consider this larger area as a critical and comprehensive unitary ecosystem with unified conservation and management needs,” the proposal says.

“There is no question that the Pribilof Islands are an ecologically, socioeconomically, and culturally important area warranting a designation and inclusive management approach,” the proposal states.

“A National Marine Sanctuary that includes the entire Pribilof Islands archipelago and introduces a new form of Indigenous co-management to the National Marine Sanctuaries system is necessary to meet this moment, to comprehensively and holistically conserve the ecosystems on which Unangax̂ and our neighbors and colleagues depend, to preserve our culture, and to elevate our institutions to the levels of co-equal governance. In return, the addition of the Pribilof Islands region to the NMS system will provide immeasurable benefits to our communities and the nation.”

* Our communities of St. Paul and St. George will engage in the naming of this nomination; that coming together is critical to officially providing an Unungan Tunuu (Aleut language) name for the nominated area. Until that time, “Alaĝum Kanuux̂” will hold space for the name of our nomination.