More than 9 million acres of Southeast Alaska's 16.7 million-acre Tongass National Forest could lose clearcutting protections with a proposed repeal of the 2001 Roadless Rule.

The U.S. Forest Service will publish its draft environmental impact statement in the Federal Register this week with a preferred alternative to remove all protections for the roadless acres. A 60-day comment period will follow publication.

The statement provides analysis of six alternatives related to the management of the Tongass. 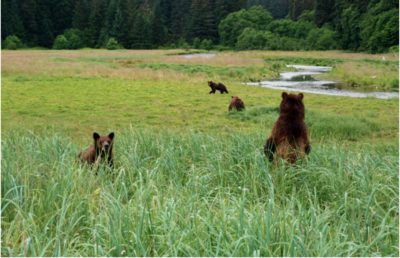 The alternatives range from no action to the removal of the Tongass from the 2001 Roadless Rule (details below). The Department of Agriculture has identified Alternative 6, which is a full exemption, as its preferred alternative. A final decision is expected in 2020.

"As an Alaska salmon troller, I am increasingly dependent on coho salmon reared in the watersheds of Southeast Alaska. Coho live at least a year in fresh water and need the habitat provided by old growth forests," said 2007 NF Highliner Eric Jordan of Sitka, Alaska. "Meanwhile, the forest service still has a huge list of salmon habitat restoration projects needing funding from the previous era of Industrial clear cut logging in Southeast Alaska. "

The Tongass produces more salmon than all other national forests combined, according to Trout Unlimited, and the fishing and tourism industry supported by the intact forest account for more than 25 percent of local jobs in the region.

"People throughout Alaska and the rest of the country depend on the productive rivers and wild fish of the Tongass for food, jobs, and recreation," said Austin Williams, Trout Unlimited’s Alaska legal and policy director. "We urge anyone who shares these values to comment to the Forest Service and urge them to uphold the Roadless Rule and conserve key areas of the Tongass, including the highest quality salmon-producing watersheds within the Tongass 77.”

In 2001, President Bill Clinton established the Roadless Rule for more than 58 million acres of undeveloped national forest nationwide. President George W. Bush sought to reverse the policy for the Tongass but was barred by a federal judge's reinstatement of the Roadless Rule.

Last year, the state of Alaska requested that the U.S. Secretary of Agriculture exempt the Tongass from the 2001 Roadless Rule, which protects old growth forests and critical salmon habitat from clearcutting and the development of logging roads.

"The latest Tongass Forest Plan by the Trump Administration is further proof that aliens can take over human minds," added Jordan. "No sane human being would propose, much less approve, this draconian money-losing plan to destroy wildlife and fisheries habitat in the Tongass Forest."

The Forest Service is scheduling a series of public meetings and subsistence hearings. A list of those meeting locations will be available on the Alaska Roadless Rule project website.

Public comments will be accepted until midnight Alaska time on Dec. 17, 2019. Comments can be submitted in writing online, via email or fax, by mail, or in person.