The risks and dangers associated with commercial fishing are well known to crews of all types and sizes. Commercial fishermen work in environments that are often in the middle of nowhere, putting in long hours and dealing with harsh weather that makes their jobs even more precarious. These aren’t situations that lend themselves to the unknown when it comes to how a new piece of gear is going to perform.

Of course, the risk and inefficiencies of the “known” aren’t considered in the same manner. An incredible amount of fishing gear is lost in the ocean every year, while many crews are using antiquated systems or making decisions based on old information. The Farallon buoys from Blue Ocean Gear address all these issues while removing that element of the unknown in multiple ways.

Designed to track and monitor valuable fishing gear and equipment when it’s in the ocean, the buoys are small and light enough to be stored inside a Dungeness crab or lobster pot but durable enough to be bounced off the deck or whipped around at sea. That durability and capability have created opportunities for fishermen across the industry, all of which are helping crews fish smarter today and tomorrow. 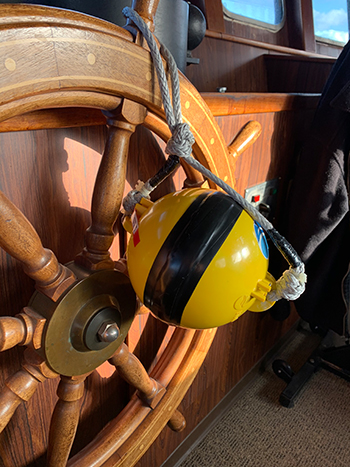 Blue Ocean Gear technology is being used in some of the world’s most challenging fisheries, including Alaskan golden king and halibut and New Brunswick snow crab. Edward Poulsen operates several vessels in the Alaskan crab fleet. One of his vessels, the F/V Patricia Lee, often sends crews pretty far north for snow crab, which means they’ll be multiple days out from Dutch Harbor. This presents multiple logistics challenges to keep track of their deployed gear on a day-to-day basis.

Additionally, because his crews are fishing in the especially deep waters of the Aleutian Islands, challenges related to understanding when their pots are on the surface versus when they're under water are prevalent. The connected buoys that eliminate these uncertainties have given his crews real-time tracking and monitoring for their fishing gear that has made a difference to his bottom line.

“It's saving us weeks, at least in terms of fishing time, because of the amount of effort we were spending looking for buoys that were not even at the surface because they were being dragged down by the tides was considerable,” Poulsen said. “That's huge in terms of the impact to our operation and it’s the result of how the Blue Ocean Gear team understands the challenges that we have as fishermen. The bottom line is it helps us fish smarter.”

Poulsen mentioned that another one of his team’s challenges was related to how they were assessing water temperature. They had been relying on government data provided by the Weather Service but it wasn’t granular or timely. Using the smart buoys that provide him with real-time data related to temperature, depth and acceleration, he’s been able to make better decisions that are saving him time and fuel.

Those savings are real and calculable, and they’re the result of now being able to use information that was otherwise unavailable. Insights about what is or isn’t happening to deployed gear are also important information to fishermen that are focused on a very different kind of catch. 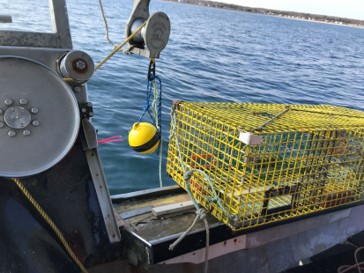 Robert Martin utilizes Blue Ocean Technology gear in a very specific way. As a gear specialist and lobsterman, he works with fisheries that predominantly use pots and traps, but many also use gillnets, trawls, and by hand by divers. As part of his job, he has been working with lots of different piece of equipment and new technology to address the whale entanglement issue in New England.

Initially turned onto Blue Ocean Technology solutions as part of a partnership with SMELTS, he’s been able to see these smart buoys as a fisher-friendly alternative for gear tracking and management versus some of the other regulator or NGO-driven solutions being presented.

"Addressing whale entanglements has become a major issue for lobster fisheries," said Martin, who is also part of the South Shore Lobster Fishermen's Association. "Blue Ocean Gear’s buoys are great complement to ropeless gear, enabling lobstermen in the area to reduce the number of lines in the water, reducing both entanglement risk and gear loss."

Adopting this sort of new technology might seem like a major commitment but it was something Martin was able to feel comfortable with and fully understand every step of the way. Blue Ocean’s technology makes it easy for users to start small, with pilot programs that don’t change the way things were being done overnight but can instead open the eyes of stakeholders across an entire organization.

Starting small is the advice that most users have, as that approach enables the technology to be foundational in a way that impacts how things are being done now while also opening up new opportunities. That connection to the present and future is something many users are actively considering. 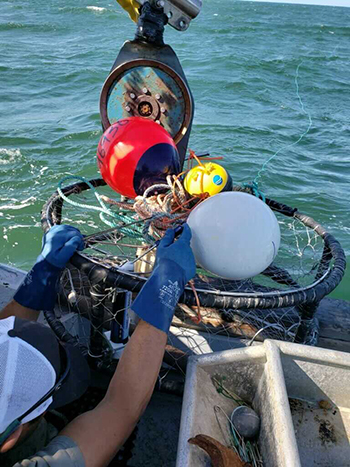 Because Blue Ocean Gear buoys work with any type of fixed gear, the company has customers across the trap, longline, gillnet and aquaculture sectors. One of those customers is Eben Nieuwkerk, owner of the Shannon Kristine and the Flying Dutchman. He fishes traps and gillnets for lobster, monkfish, and ground fish in southern Maine. He’s one of a very few gillnetters left in the Northeast.

Nieuwkerk has been using Blue Ocean Gear buoys for a couple of months as part of a partnership with SMELTS and has mentioned that the products have been able to minimize gear conflict. Because the buoys instantly recognize when they are in the water, underwater or out of the water, they can automatically send him a ping when anything out of the ordinary is happening. He can instantly know when someone might be interfering with his gear or stealing his catch.

Additionally, the buoys are helping him to collect data in a visual way that is easy to understand and utilize to make decisions. That has created efficiencies for his operation in the short term but has already got him thinking about how such efficiencies can open up even more opportunities for his business.

“I believe the smart buoys could essentially be used as pingers for my gillnets to save dolphins,” Nieuwkerk mentioned. “The smart buoy could actually be used to track your endline so that if a whale were entangled in it, a rescue team would know the specific details of where and how that happened so they could go out and clear the rope off.”

That kind of conversation about new and potential applications is the sort of thing the Blue Ocean Gear team actively cultivates with their customers. Some users have talked about seeing their technology more fully integrated into the solutions they had been using. These kinds of integrations are making a difference in the short term while also opening up ideas for the long term.

Blue Ocean Gear has proven how they can resolve such challenges, and their smart buoy’s easy integration with everything from trap to longlines, gillnets and even FADs, further showcases how many different options potential users can explore and test. With products that are easy to use and customizable, Blue Ocean Gear customer service teams can find the right initial hardware package and software for just about anyone.

Jeremiah Karpowicz is the Editorial Director for National Fisherman. He has created articles, videos, newsletters, ebooks and plenty more for various communities as a contributor and editor. You can get in touch with him on Twitter: @jeremiahkarp