As expected, the International Pacific Halibut Commission set quotas down for 2020 at its annual meeting in Anchorage last week.

The International Pacific Halibut Commission met the first week of February in Anchorage, Alaska, where members voted to approve quotas for 2020.

Quotas for Pacific halibut will be reduced by just over 5 percent this year as a result of declining stocks. Alaska’s share of the 36.6 million pound total catch is 28.13 million pounds for all user groups. 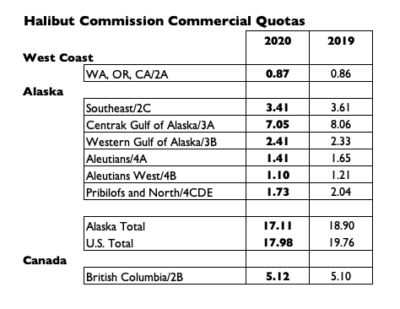 Alaska halibut quotas (show in millions of pounds) are down about 9 percent overall year over year.

The commercial sector in Alaska overall will lose about 9 percent, dropping 18.9 million pounds to 17.11, while the West Coast states (Washington, Oregon and California) got a slight increase of about 10,000 pounds to 870,000 for the coastwide quota.

The halibut fishery will open on March 14 and close on Nov. 15.

Industry leaders predicted late in 2019 that the fishery had maxed out its value proposition and likely would not be able to expect a higher dock price to make up for a lower quota. 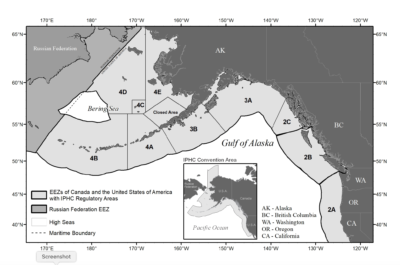 The commission states the primary reason for the quota cut is to protect the breeding stock after documenting a higher rate of females caught than once believed.

New data from the commission show that the sex ratio of the commercial catch ranged from 81 to 97 percent female in some regions.

In an effort to collect better data on the sex-ratio of the catch, the commission developed two new methods of data collection.

One method relied on commercial fishing crews to physically mark fish before dressing out the fish. Females got two parallel cuts in the dorsal fin, while males got one cut in the gill covering on the white side of the fish.

Commission biologists also worked with researchers at the University of Washington to develop a DNA test for sex based on small fin clips. The DNA method was first used to validate the accuracy of the physical marking. By 2019 the DNA sampling method proved to be both more accurate and efficient.