When a fishing company needs more catching capacity, there are generally two choices: build a new boat or sponson one of your old ones.

But the number of decommissioned supply boats from the Gulf of Mexico oil industry has expanded a third option: convert an OSV into a fishing boat. Ocean Peace chose option three and sent the first Amendment 80 catcher boat to Alaska in August 2021.

Steve Becker, port engineer and project manager for Ocean Peace, a Seattle based fishing company operating primarily in Alaska’s Bering Sea, went down to the Gulf Coast in the spring of 2019 looking for a vessel of around 250 feet to convert a big oil supply boat into another catcher processor.

“When I got down there, I noticed all these 150-footers, and I called our CEO, Mike Farris, and said, ‘Hey, there’s a lot of smaller boats down here that could make good catcher vessels,’” Becker says.

Farris gave him the green light to find a smaller boat, and on May 25, 2019, Becker was making the passage through the Panama Canal aboard the Wes Bordelon, a 131-foot offshore supply vessel built at Bollinger Shipyard in Lockport, La., in 2001.

“Of all the boats we looked at, she was the cleanest and best kept up,” says Becker. “So many times, they just haul them out and leave them. And they go to downhill pretty quick.”

One of the mates from another Ocean Peace vessel came to help make the passage and was less than impressed with Becker’s choice.

“He got looking around and started making comments. He said, ‘Steve, we got to do something about the bow.’ And he didn’t like the wheelhouse — it was quarter-inch steel with 36-inch framing and big windows. He said the first big sea would just sweep it away. I said, ‘Don’t worry, we’ll make a boat out of her.’”

The Wes Bordelon reached Seattle in early June 2019, and the work began.

“We hauled her out at North Lake Shipyard,” says Becker. “We added about 10 feet to the stern. The propellers were close to the stern, and I thought it would just be a matter of time before one of the trawl doors got in there. We also needed it so we could get a stern ramp in there.”

At North Lake the Wes Bordelon also lost its unimpressive bow, as well as its name. Mark Siberg a lofter, helped Becker create a higher bow that also included a Schottel thruster.

“It’s all mathematical when it comes to predicting what a material will do as it travels through space,” says Siberg, owner of a Argonaut Marine, the company through which he has been providing lofting support to the boatbuilding industry “for a long time.” Siberg uses and has developed software to do lofting for various projects.

“Usually, I listen to what the owner is trying to accomplish and try to help them get there. In this case they wanted to keep the pilothouse dry. So the question was, how we could extend the bow without making it really obvious that it was a bow extension?” Siberg said. He started by measuring the boat.

“Then we worked out a hull form to carry those lines up without a visible knuckle or unfairness in order to give them the bow that they were hoping for.”

As far as Becker is concerned, it worked. “It does exactly what we hoped it would,” he says. “Sends the water out away from the wheelhouse.”

“We got the deflector rudders from Lowell Stambaugh,” says Becker. “And we had an electrolysis problem with the shafts so we had new ones made at Sound Propeller her in Seattle. They’re Aquamet-19, 307-inch, 6 inches in diameter.”

At the yard they also put in a new stern shoe bearings and did the alignment on the shafts. “We kept the original engines,” says Becker. “Those are Cummins KTA 38s. They were 800 horsepower, but we had them rebuilt to 1,000.”

The KTA 38s are turbocharged, 38 liter, V-12s. Built in England, they can be fitted with mechanical or electric fuel injectors. While rated as Tier I engines, because they were original, they escaped Tier IV requirements for engines over 815 horsepower.

In addition, Ocean Peace installed a new Cummins QSK19 to run the hydraulics. “A it’s got two 6 CTA Cummins generators,” says Becker. The inline 6-cylinder, 8.3 liter QSK19, can be set up to generate anywhere between 224 and 321 kilowatts.

According to Becker, they put the boat back in the water and Sean Testa, of Jensen Maritime conducted a preliminary stability test on the boat. “We were planning on adding a lot of steel above the waterline,” says Becker. “We wanted to make sure she could take it.” 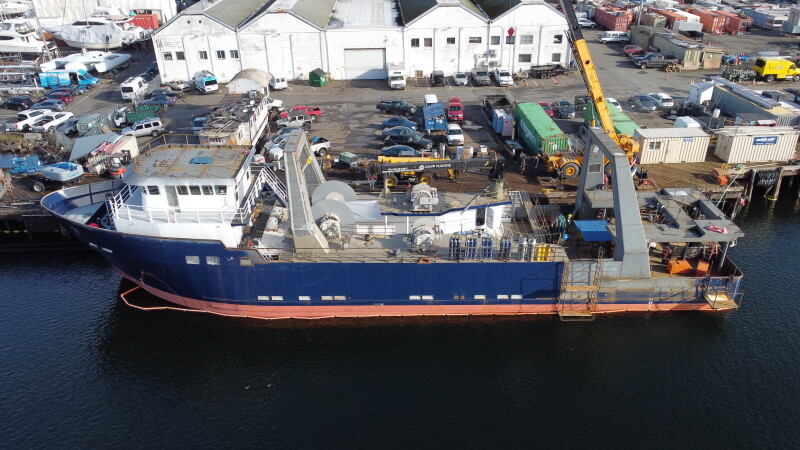 Mark Siberg helped again with lofting a new shelterdeck and wheelhouse. “I got more involved in the concept phase than I normally do,” says Siberg. “But it worked out. Lofting a wheelhouse is different than when you have all those materials in motion. It’s simpler.”

One of the first challenges Becker faced in converting what he refers to as a Caribbean mud boat, into a commercial fishing boat is the vessels low freeboard. “Because she’s classed we had to pay attention to how much water could be on deck. So, one of the things we had to was put flappers on the scuppers, so they would let water out, but not let water back in.” In addition, Becker notes, they added a fiberglass grate 18 inches above the main deck. “We wanted to dry it up for the crew,” says Becker. “We didn’t want them sloshing around in a lot of water.”

Having taken off the wheelhouse and the old bulwarks along the extensive deck, the Ocean Peace crew started putting on steel.

“Our crew averaged about eight to 10 guys,” says Becker. “This was a fill-in project, for when people didn’t have other things to do. If we need to we would bring crew over from other boats. Redline Welding, they did all the welding. They were our key guys.”

The Redline team built up new bulwarks, a shelterdeck, and new wheelhouse according to the loftings provided by Argonaut Marine. And according to Becker, surveyor Jesus Larringa kept them on track as far as building everything according to class.

“We classed the boat with RINA,” says Becker. “It’s an Italian classification society.” RINA, the Registro Italiano Navale, was founded in Genoa, Italy —home port of Christopher Columbus — in 1861.

“For example, we have to have a certain amount of freeing ports for the volume of water that could come on deck for each section of the boat. That’s why you see those big scuppers around the bow on the shelter deck. Everything has to be approved. Sometimes it got to be a little bit of a hairdo. We had to build tunnels under the shelter deck to meet the standards.”

The Bering Hope will usually carry a crew of five, with three staterooms on the shelterdeck below the wheelhouse, and two larger staterooms on the main deck. “We have accommodations for 12, in case we do any survey work. Right now, we turned one of them into a storeroom.” Below decks the Bering Hope has only the engine room with the main and auxiliary engines, and tankage for fuel, ballast and fresh water.

“She’s a catcher vessel,” says Becker. “So there’s no fish hold, she just takes the bag to the processing vessel. We store extra web and gear under the shelter deck along the sides of the main deck.”

Deck gear consists of two Rapp MacGregor winches, each holding 2,400 meters (7,900 feet) of 26-millimeter (1-inch) wire. In addition to the Rapp winches the deck includes a range of Pullmaster winches for the gilson, cod end, and sweep; and an SOW 300, a third-wire winch for the net monitors.

“There’s two net reels,” says Becker, so they can spool the net out to work on it, and there’s third transfer reel for changing the nets.”

In addition to a 3-ton Rapp crane, two gantries fore and aft offer points of lift for the gear. They also house the stacks for the engines. “All the exhaust runs up through aft gantry, and then the thruster and the hydraulic engine come out the forward gantry,” says Becker.

“They’ve got the full package,” says Becker. “Everything, including the Seapix-F sonar, which is the latest and greatest. It’s made in France.”

“All the electronics are down below on the shelterdeck,” says Becker. The vessel may be the first in the United States to use the Avitech Marine multiview system, designed to give vessel operators a single adaptable display for all the data and imagery they’re using.

“The only thing in the wheelhouse are the displays. And the captain can configure those the way they want them.”

The electronics also include a Maverick satellite system.

“They make trips of 21 to 28 days,” says Becker. “The crew can get on there to do backing, check email, things like that, but not a lot more, the data is still expensive.”

The boat made its first trip to Alaska in August 2021 and spent 3 1/2 months in the Bering Sea.

“The boat is big for a catcher, but OPI [Ocean Peace Inc.] wanted a large catcher boat for greater endurance and one that could withstand the rougher seas that the smaller vessels cannot,” says the boat’s captain, Arron Burbach. “One of the biggest benefits of this boat’s size is its ability to ride the swells. She’s not so small as to get thrown around, but not too big to slam between sets. The bow design perfectly breaks the swell. Not only can this boat withstand rough waters, we can still tow through them with no problem. Because of this, the BH is absolutely a producer.”

Burbach is also thrilled with the electronics package and the Avitech Multiview system.

“The electronic system on the BH is state of the art,” says Burbach. “Lunde Marine did an excellent install of all the systems in the wheelhouse. Everything is run through the Avitech Marine Multiview system. I for one, love it! It allows me to focus more on the job of fishing, maneuvering and crew safety rather than fumbling through less advanced systems to get the information I need quickly. The multiview camera system allows me to see the guys on the deck and in the mechanical areas. The aesthetics rival the functionality; it’s a fun system!”

Inside the Bering Hope