Alaska's seafood processing and harvesting sectors are preparing covid-19 emergency plans as some of the state's fishing hubs attempt to enact their own guidelines before workers begin to arrive for the summer harvest season. 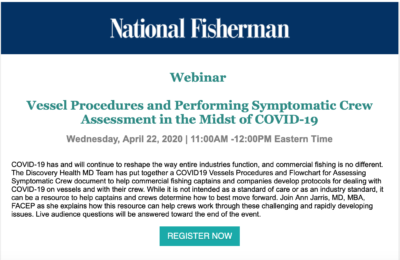 Join us April 22 for a free webinar on developing covid-19 vessel and crew procedures.

The state requires fishermen and businesses supported by workers arriving in the state to submit a travel plan or protocol for maintaining critical infrastructure to [email protected] The plan should outline how they will avoid:

However, Alaska Public Media reported earlier this week that the governor's office is not making those submitted plans available to the public, including municipal leaders, who are working to ensure the safety of local residents.

Some towns are attempting to enact their own regulations. However, they may run up against an amended rule, issued on April 9, that stipulates only "communities that are removed from the road system, have a population smaller than 3,000 as of the effective date of this order, and do not house a Critical Access Hospital, Sole Community Hospital or Acute Care Hospital" may adopt more stringent travel restrictions than those codified at the state level.

The Southeast city of Wrangell — with a year-round population of 2,400 — was designated a hub by the state, and its attempt to enact more stringent restrictions was rejected.

Cordova officials are requesting that fishermen and processing companies submit action plans to the city as well as the state.

The United Fishermen of Alaska has compiled a resource guide for commercial fishermen.

“We have all the mandates the state has put in place, the UFA updates that we send out weekly, helpful documents to download, the onboard procedures telling fishermen what they need to do to have a season, and a tab for economic relief and links to other resources and websites,” Frances Leach, the association's executive director, told the Anchorage Daily News.

The plan submissions would ideally close those loopholes. But without public access to the submitted plans, it may be more difficult to quell community fears of outbreaks.

In the Bristol Bay region, the virus is being compared to the Spanish flu, which decimated the native population 100 years ago.

“Historically, it has wiped out our people, and we just don’t want it to happen again,” Lorianne Rawson, the tribal administrator for South Naknek, told KTOO. “Their boats are in boatyards. Their boats don’t have a bathroom. They have no way to shower, they can’t do laundry, and they can’t go to the store to get their food. So how are they going to effectively quarantine on their boats? That’s not going to happen.” 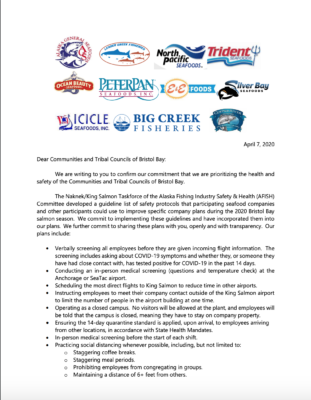 On April 7, 11 processors submitted an open letter to the communities and Tribal Councils of Bristol Bay that included "a guideline list of safety protocols" to be implemented during the 2020 season.

The letter also noted that "this is not a definitive list of all the measures being implemented. Companies will continue to refine their plans as new information and guidance becomes available."

This story was updated on April 17, 2020, to include the letter from the processors to Bristol Bay communities.

Northern Lights: Processing in a pandemic

Northern Lights: Processing in a pandemic